A Killing in the Sun: Dilman Dila: 9780987019875: Amazon.com: Books. Zhan Wang's animation shows how lunar minerals could affect China. Exploring the Future of Africa. After an exceptionally long break, I’m glad to announce that the AfroCyberPunk blog is finally back in session with a totally brand new and exciting mission! 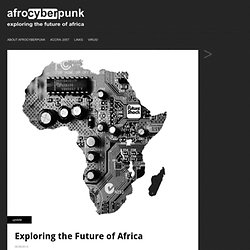 When I published my very first post on the AfroCyberPunk blog some four years ago, my intention was to add a new perspective to the existing discussion on African science fiction at the time, by highlighting the relevance of cyberpunk themes in the reality of everyday life in Africa. This sort of imagery is what first inspired me to publish this blog, however, my main interest has always been to explore the underlying factors driving these rapid changes in Africa, and to imagine what effects they are likely to have in the near and distant future.

And so I’ve decided to expand the focus of this blog will be broadened to beyond science fiction and cyberpunk exclusively to a broad discussion of African futurism. So what next, you ask? The Persian Gulf’s ‘Blade Runner’ Obsession Is Killing Migrant Workers. This article originally appeared on VICE UK. 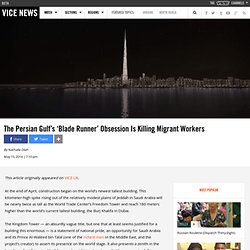 Playing a Minority Forecaster in search of Afrofuturism: where am I in this future, Stewart Brand? I share a dream: to ensure that long oppressed racial minority and diverse voices can articulate themselves in the futures imagined in the practices of long- term thinking and in the professional areas of foresight . 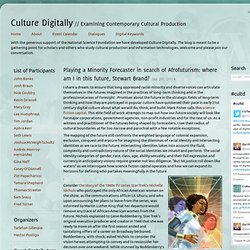 Promises about the future in the strategic fields of long-term thinking and how they are portrayed in popular culture have quickened their pace in early 21st century digital culture about what we will do, think, and build. Mark Fisher calls this science fiction capital. This elite field of work attempts to map out how our future society will look like for major corporations, government agencies, non-profit industries and for the rest of us. As a witness and practitioner of the futures being shaped by forecasters, I see their radius of cultural boundaries as far too narrow and parochial with a few notable exceptions.

Her devoted fan was none other than Martin Luther King. Originator of the term ‘Gulf Futurism’ hopes Gulf-born storytellers can reverse misconceptions about region. Author of ‘The Girl Who Fell to Earth’ to Speak to NU-Q Graduates “Big fish in a small pond,” is how Sophia Al-Maria, author of the critically acclaimed The Girl Who Fell to Earth, describes prospective journalism and communication graduates of Northwestern University in Qatar. 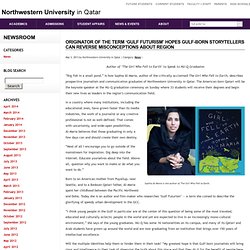 The American-born Qatari will be the keynote speaker at the NU-Q graduation ceremony on Sunday where 33 students will receive their degrees and begin their new lives as leaders in the region’s communication field. Sophia Al-Maria is the author of The Girl Who Fell to Earth. In a country where many institutions, including the educational ones, have grown faster than its media industries, the work of a journalist or any creative professional is not as well-defined. That comes with uncertainty, and wide-open possibilities. 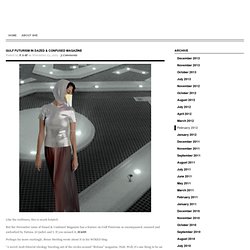 But the November issue of Dazed & Confused Magazine has a feature on Gulf Futurism as encompassed, encased and embodied by Fatima Al Qadiri and I. If you missed it, HASH. Perhaps far more excitingly, Bruce Sterling wrote about it in his WIRED blog: Analysis - Ethnic Futurism in the Gulf  By Scott Smith. 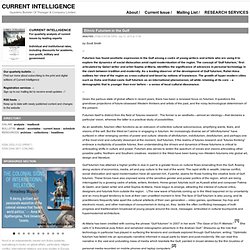 Al Qadiri & Al-Maria on Gulf Futurism. “The future is here, it’s just not very evenly distributed.” – William Gibson Over the last fifty years, the Arabian Gulf has given birth to a very particular brand of futurism. 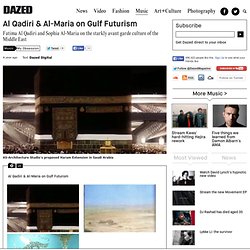 It is a phenomena marked by a deranged optimism about the sustainability of both oil reserves and late capitalism. Similar to early 20th century Euro-Futurism and mid-century American kitch and retro-futurism, Gulf Futurism is evident in a dominant class concerned with master-planning and world-building, while the youth culture preoccupied with fast cars, fast tech and viddying a bit of ultra-violence. Beyond the Beyond. *A weird Arab-futurist ideology bursting out of the circles around “Bidoun” magazine. 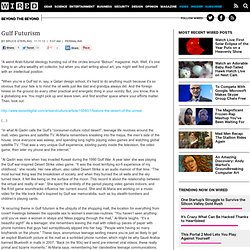 Huh. Well, it’s one thing to an ultra-wealthy art collector, but when you start writing about art, you might well find yourself with an intellectual position. *When you’re a Gulf kid in, say, a Qatari design school, it’s hard to do anything much because it’s so obvious that your fate is to mind the oil wells just like dad and grandpa always did. African Science Fiction Makes a Comeback: A Review of AfroSF.

By Matthew Omelsky Has African science fiction only recently come into existence? 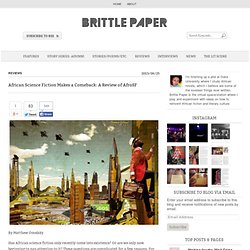 Or are we only now beginning to pay attention to it? These questions are complicated for a few reasons. For one, there is an extensive history of speculative fiction by white South African writers, arguably going as far back as Ferdinand Berthoud’s 1924 story “The Man who Banished himself.” Alterfutures. Transformers @ FORMAT 3: REALITY. Transformers @ FORMAT 3: REALITY Posted by S A-M on July 9, 2013 · 2 Comments. 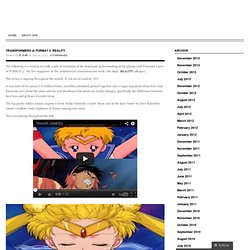 Ethnifuturism in the Gulf. My long interview with Rahel Aima of THE STATE, a publication based in Dubai, on the emergence of ethnifuturisms—non-western conceptions of the future coming from the Global South—has just been published in the summer/fall issue of Current Intelligence. In it, I explore how these alternative future cultures are growing, what constitutes them, and talk to Aima about their main drivers and actors, and how she sees them interacting with cultures in the Gulf, Africa, India and beyond.

Aima adds rich insight from her perspective as an analyst, curator and observer of these movements. Analysis - Ethnic Futurism in the Gulf