Native American Drums. Drum Beats and their ties to the Native American past. There have been a number of Indian tribes in existence and in all of them the drum was usually an important part of their culture. 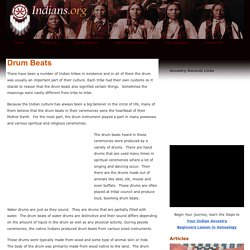 Each tribe had their own customs so it stands to reason that the drum beats also signified certain things. Sometimes the meanings were vastly different from tribe to tribe. Because the Indian culture has always been a big believer in the circle of life, many of them believe that the drum beats in their ceremonies were the heartbeat of their Mother Earth. For the most part, the drum instrument played a part in many powwows and various spiritual and religious ceremonies.

The drum beats heard in these ceremonies were produced by a variety of drums. Water drums are just as they sound. These drums were typically made from wood and some type of animal skin or hide. In short, drum beats speak to the participants in powwows, tribal council events or other ceremonies where drums are often utilized. More on this subject: Drum Beats Related Article Links. Music - Tarrus Riley Is a Reggae Singer With a Legacy, a Following and a Mission. Reggae Routes: The Story of Jamaican Music - Kevin O'Brien Chang, Wayne Chen. Best Reggae Music Songs 2015. (Fleet Foxes performing at the ACL Festival) Pity the poor guys in Fleet Foxes. 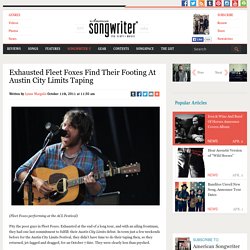 Exhausted at the end of a long tour, and with an ailing frontman, they had one last commitment to fulfill: their Austin City Limits debut. In town just a few weekends before for the Austin City Limits Festival, they didn’t have time to do their taping then, so they returned, jet-lagged and dragged, for an October 7 date. They were clearly less than psyched. Not that they came with an attitude; they just didn’t have much left to give. But when the Seattle bandmates lifted their voices together, their choir-boy-pure harmonies were all they needed to keep 800 or so fans in the new ACL Live at the Moody Theatre. Fleet Foxes’ Crosby, Stills & Nash-meets-Simon & Garfunkel influences manifested themselves in songs like “Bim Sala Bim” and “The Shrine/An Argument,” during which they shifted tempos and textures as if performing movements of a symphony, their volume swelling and receding like tides. 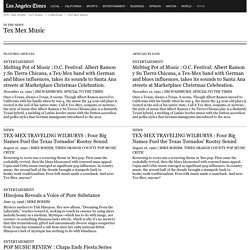 Her new album, "Dreaming From the Labyrinth," reaches toward it, seeking to touch its essence by using sheer melodic beauty as a medium. Mystique--which has to do with image, not essence--is something Hinojosa lacks utterly, which is why it's no mystery that this tremendously gifted and uncommonly diverse singer-songwriter from Texas has remained a cult item since her 1989 national debut. Hinojosa's lack of mystique has nothing to do with blandness. December 24, 1991 | JIM WASHBURN, SPECIAL TO THE TIMES Sometimes Orange County gets pretty close to having things the way they should be. September 27, 1994 | ALICIA DI RADO Chicano and Latino students at Cal State Fullerton will celebrate the 25th anniversary of the university's Chicano studies department with a fund-raising dinner, students said Monday. April 22, 1991 | MIKE BOEHM September 12, 1991 "Viva Mexico!

" August 1, 1998 | MIKE BOEHM. Fender Tex-Mex™ Stratocaster® Pickups. Cajun Music: The Savoy Family Band. Articles about Cajun Music - tribunedigital-sunsentinel. By Ann Savoy One of French Louisiana's most vital attractions is its music. Acadian music has undergone vast changes since arriving in Louisiana, to a large extent because those who play it today live so differently from earlier residents. Understanding Cajun music in all its variety is a large undertaking but an important one. Today, we in Louisiana are fortunate to have living representatives of many of its various styles and stages. A look at Cajun music and its development offers a glimpse into Louisiana's different cultures, its fascinating history, and the variety which exists within a traditional culture. Excerpt, J'ai Ete Au Bal: Cajun and Zydeco Music of Louisiana. One of the earliest forms of music in Louisiana was the unaccompanied ballad.

Although today television, radio and air conditioners have lured people off their porches and made gatherings of friends less frequent, some of the older people still remember the days when neighbors sat together and shared songs.