ABCB - About the National Construction Code. Refer below for an accessible version of this graphic. 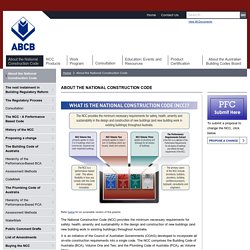 The National Construction Code (NCC) provides the minimum necessary requirements for safety, health, amenity and sustainability in the design and construction of new buildings (and new building work in existing buildings) throughout Australia. It is an initiative of the Council of Australian Governments (COAG) developed to incorporate all on-site construction requirements into a single code. The NCC comprises the Building Code of Australia (BCA), Volume One and Two; and the Plumbing Code of Australia (PCA), as Volume Three. Volume One: pertains primarily to Class 2 to 9 buildings which are commercial, industrial and multi-residential buildings. Volume Two: pertains primarily to Class 1 and 10 buildings which are houses, sheds and carports.

Second Cambodian factory collapse injures 23 workers who produce clothes for H&M. People watch as a roof of a relaxing shelter is lifted from the water after it collapsed behind a factory in Phnom Penh on May 20, 2013. 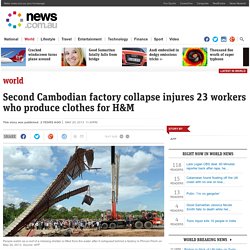 Source: AFP A COLLAPSING structure injured 23 workers Monday at a Cambodian factory producing garments for fashion brand H&M, police said, the latest incident to raise concerns about regional industrial safety. Cambodia shoe factory collapse kills workers. Cambodian clothing industry workers have been killed in the partial collapse of the shoe factory where they worked, adding to the loss of life in the Asian industry of making garments for the west. 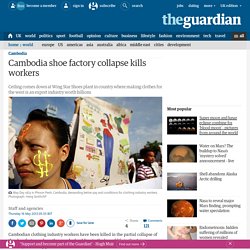 A concrete ceiling fell in at the Wing Star Shoes plant in Kampong Speu province, west of the capital, Phnom Penh, authorities said. Police officer Khem Pannara said heavy equipment stored above may have caused the collapse. Authorities told the Associated Press that two bodies had been pulled from the wreckage and at least seven people were injured, while a union official speaking to the Reuters news agency put the death toll at six or more.

There were estimates of up to 50 people trapped in the wreckage. "We were working normally and suddenly several pieces of brick and iron started falling on us," said an injured 25-year-old Kong Thary, recounting the scene from a nearby clinic. Delhi Disaster Highlights Poor Safety Compliance. The building collapse disaster in Delhi and a similar collapse near Chennai occurring on Saturday, June 28, highlight India’s record of poor compliance with safety protocols. 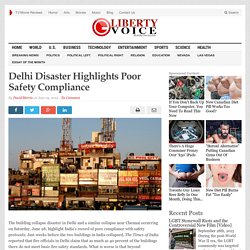 Just weeks before the two buildings in India collapsed, The Times of India reported that fire officials in Delhi claim that as much as 40 percent of the buildings there do not meet basic fire safety standards. What is worse is that beyond regulations that deal directly with fire safety, there is no centralized body that regulates structural safety.

Reports indicate that on Saturday at least 15 people were killed in the two building collapses. New Delhi building collapse toll rises to five as rescuers pull body of girl from rubble. Updated Rescuers in the Indian capital New Delhi have plucked the body of a girl from the ruins of a collapsed four-storey building, increasing the death toll to five. 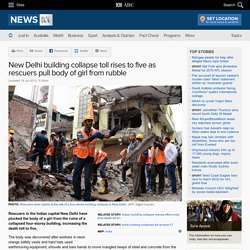 The body was discovered after workers in neon orange safety vests and hard hats used earthmoving equipment, shovels and bare hands to move mangled heaps of steel and concrete from the building that caved in late on Saturday. Home - Free the Slaves. Job insecurity and health: A study of 16 European countries. Labour's Chris Bryant calls for clampdown on exploitation of migrant workers.

Labour has called for a clampdown on “unscrupulous” employers who reduce costs by exploiting migrant workers from Eastern Europe, cutting British workers out of the competition for jobs. 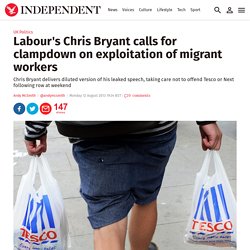 The call by the shadow Immigration minister Chris Bryant had echoes of Gordon Brown’s ill-fated promise of “British jobs for British workers” – although Mr Bryant was careful to pitch his comments in a way that could not be interpreted as an attack on Eastern Europeans who are prepared to work for low pay. He promised that a Labour government would hand over to local government the power to enforce minimum wage legislation, and double the fines for employers who knowingly hire illegal immigrants. He also promised a mandatory register of commercial landlords, to prevent employers from making migrant workers on short-term contracts live in overcrowded sub-standard accommodation. When he came to deliver the speech, his comments about Tesco were more guarded.

Action promised to clamp down on working visas and labour hire companies following revelations of exploitation in horticulture and food processing - ABC Rural. Updated The National Farmers Federation says mistreatment of workers has no place on Australian farms. 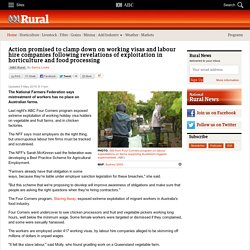 Last night's ABC Four Corners program exposed extreme exploitation of working holiday visa holders on vegetable and fruit farms, and in chicken factories. The NFF says most employers do the right thing, but unscrupulous labour hire firms must be tracked and scrutinised. Fairtrade International / About / What is Fairtrade? Not all trade is fair! 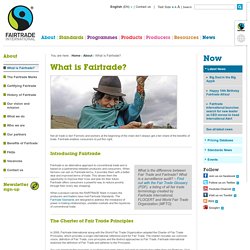 Farmers and workers at the beginning of the chain don’t always get a fair share of the benefits of trade. Fairtrade enables consumers to put this right. Introducing Fairtrade. Petitions delivered to NA, others, National, Phnom Penh Post. Protesting unjust employment practices and rude supervisors, hundreds of workers from Bloomsfield (Cambodia) Knitters Ltd travelled to the capital from Kampong Chhnang province to petition the Ministry of Labour, the National Assembly and the German Embassy. 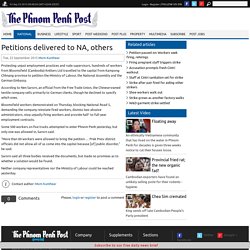 According to Nen Sarorn, an official from the Free Trade Union, the Chinese-owned textile company sells primarily to German clients, though he declined to specify which ones. Bloomsfield workers demonstrated on Thursday, blocking National Road 5, demanding the company reinstate fired workers, dismiss two abusive administrators, stop unjustly firing workers and provide half- to full-year employment contracts. Some 500 workers on five trucks attempted to enter Phnom Penh yesterday, but only one was allowed in, Sarorn said.

“More than 60 workers were allowed to bring the petition … Prek Pnov district officials did not allow all of us come into the capital because [of] public disorder,” he said. Cambodia-ASEAN Media. Global Development Professionals Network. $32bn (£21bn) in annual profits sounds impressive doesn't it? 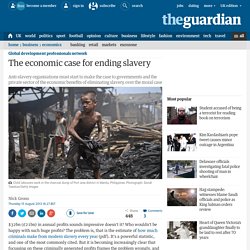 Who wouldn't be happy with such huge profits? The problem is, that is the estimate of how much criminals make from modern slavery every year (pdf). It's a powerful statistic, and one of the most commonly cited. But it is becoming increasingly clear that focussing on these criminally generated profits frames the problem wrongly, and risks undermining effective policy action to end this atrocity. Instead all of us in the anti-slavery organisations must start working together to effectively make the case to governments and the private sector of the economic benefits of eliminating slavery, over and above the unarguable moral case to end this atrocity. 2014 Corruption Perceptions Index. Titled. 17 August 2011 – Although compliance by Cambodian exporting garment factories with national and international labour standards is generally good, areas such as discrimination and occupational safety and health remain a concern, according to a new United Nations report. The report on working conditions in Cambodia’s Garment Sector was released today in the capital, Phnom Penh, by the UN International Labour Organization’s (ILO) Better Factories Cambodia programme.

It reflects data compiled over a six-month period from November 2010 to April 2011 from 186 of the 276 factories registered with the programme, which was set up in 2001. “Compliance levels generally remain high, although some areas of concern remain, particularly regarding discrimination, overtime, and occupational safety and health,” stated a news release issued by the programme. Monitors found no evidence of forced labour and no workers were confirmed to be below the legal working age of 15. Untitled. 'It's a budget for all Australians': Hockey Prime Minister Tony Abbott and Treasurer Joe Hockey are relieved with the response, so far, to the second budget which has been deliberately framed to win back the voters. A reinvigorated Joe Hockey has again implored businesses and consumers to flash their credit cards in a bid to jump-start stubbornly flatlining consumer and business confidence, arguing his everyone-is-a-winner budget has set the conditions for optimism and growth.

"This is a great opportunity for Australia to be more prosperous," he said, dismissing suggestions the budget had been designed to fight an early election even as Prime Minister Tony Abbott declined to completely rule the option out. Slavery Footprint - Made In A Free World. Made in a Free World - A solution for business. Powered by Translate Slavery Footprint. Forced labour, human trafficking and slavery (Forced labour, human trafficking and slavery) What is forced labour? Whilst trafficked people are often exploited through forced labour, not everyone who experiences forced labour has been trafficked. The 2012 Global Estimate of Forced Labour by the International Labour Organisation (ILO) estimated that at any one time there are 20.9 million victims of forced labour of whom more than 9.1 million were in forced labour as a result of human trafficking. In 2013, the Crimes Legislation Amendment (Slavery, Slavery-Like Conditions and People Trafficking) Act 2013 introduced amendments to the Criminal Code Act 1995 (the Criminal Code) which included a stand-alone offence of forced labour.

The definition of forced labour is found in section 270.6 of the Criminal Code. Right to freedom from slavery and forced labour. This material is provided to persons who have a role in Commonwealth legislation, policy and programs as general guidance only and is not to be relied upon as legal advice. Commonwealth agencies subject to the Legal Services Directions 2005 requiring legal advice in relation to matters raised in this Guidance Sheet must seek that advice in accordance with the Directions.