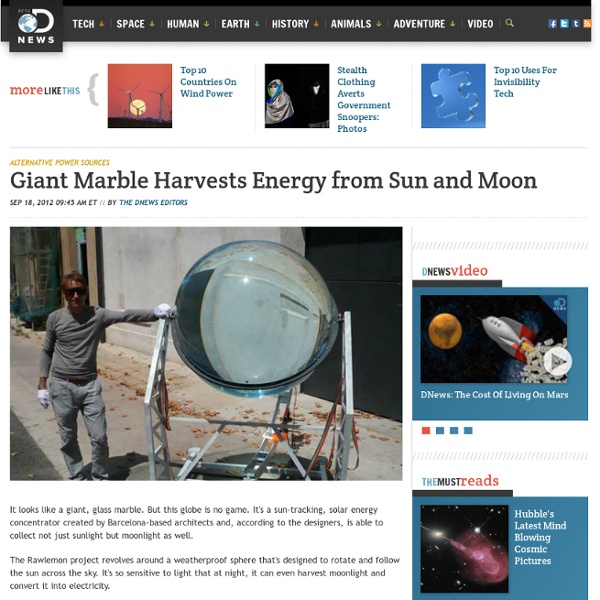 It looks like a giant, glass marble. But this globe is no game. It's a sun-tracking, solar energy concentrator created by Barcelona-based architects and, according to the designers, is able to collect not just sunlight but moonlight as well. The Rawlemon project revolves around a weatherproof sphere that's designed to rotate and follow the sun across the sky. It's so sensitive to light that at night, it can even harvest moonlight and convert it into electricity. Andre Broessel, the architect and designer, says his spherical, sun-tracking glass globe is able to concentrate sunlight and moonlight up to 10,000 times and that the system is 35 percent more efficient than photovoltaic designs that track the sun. via Design Boom and Inhabitat Credit: Andre Rawlemon ANALYSIS: Solar Panels Light Up the NFL Related:  Solaire

Rawlemon’s Spherical Solar Energy-Generating Globes Can Even Harvest Energy from Moonlight The solar energy designers at Rawlemon have created a spherical, sun-tracking glass globe that is able to concentrate sunlight (and moonlight) up to 10,000 times. The company claims that its ß.torics system is 35% more efficient than traditional dual-axis photovoltaic designs, and the fully rotational, weatherproof sphere is even capable of harvesting electricity from moonlight. The ß.torics system was invented by Barcelona-based German Architect André Broessel. He sought to create a solar system that could be embedded in the walls of buildings so that they may act as both windows and energy generators. The spheres are able to concentrate diffused moonlight into a steady source of energy. + Rawlemon Via Designboom

Solar Energy is capable of powering Australia. Solar Energy is capable of powering Australia. “The Magazine of Engineers Australia”, Vol 80, No. 9, Sept 2008, page 20 “Economically viable Power from the Sun Half of Australia’s renewable energy target could be generated from solar power by 2020, according to engineering services company WorleyParsons. Meurs said the company’s research has found that Australia’s desert regions would be ideal locations for such plants and the optimal size would be 250 Mega Watts. The company invited potential customers to participate in a feasibility study and received a very favbourable response, Meurs said. The proposed technology would be parabolic mirrors focusing sunlight onto tubes containing thermal oil. The plants would cater for power demand during the day, with some heat storage capacity in molten salt to cover the evening. Each solar plant would require no more land than a conventional coal fired power station. Anti-renewables = anti-business. Pro nuke = anti small businesss with local control.

Up on the Roof By Michael Brune, Sierra Club’s Executive Director Let me start with a confession: I’m the executive director of the country’s largest environmental organization, and I don’t have solar panels on my roof. Now wait a minute. Before you judge, I do have a few justifications. Until now. Last year, the Sierra Club ran a pilot program in California to spread the news to our members and supporters that there’s never been a better time to add solar panels to their roofs. Our pilot program was successful enough that we’re expanding it to seven states: Arizona, California, Colorado, Connecticut, Maryland, Massachusetts, and New York. But the economics are far from the only reason you should check out solar leasing. If you’re interested in being a part of the Sierra Club’s program, the first step is to do what I did: Request a solariQuote. Once you supply some data on your utility bills, you can find out exactly how much you can expect to save (based on the plan you choose). Related Stories:

The Solar Trade War Demystified NOTE: This is a guest post by Erica Etelson, a blogger for Mosaic, an online marketplace for investing in solar. Follow her at @iluvsolar. Recently, the U.S. Commerce Department imposed tariffs on $3 billion a year worth of Chinese solar panel imports. Non-Chinese solar panel manufacturers contend that China is able to “dump” cheap panels on the global market thanks to lavish Chinese government subsidies. It’s a complicated, wonky issue even for solar geeks like me, and there are compelling policy justifications for and against the tariffs. Solar Tariffs: The Pros - The Chinese solar industry is undermining US solar manufacturing by flooding the market with cheap panels, and tariffs could help level the playing field. - Instead of dumping panels on the global market, China can and should install them domestically. - Cheap PV panels stifle innovations like thin film solar. Related Stories: Oil-Soaked Saudi Arabia Sets Goal of 100% Renewable Energy

fonctionnement des réacteurs-météorologiques, cheminée-solaire flotante, tour-énergétique, vortex Solar Could Provide One-Sixth Of the World's Heating and Cooling Solar could provide one-sixth of the world’s heating and cooling needs by 2050, according to a report by the International Energy Agency (IEA). This would eliminate 800 megatons of carbon dioxide emissions a year, which is more than Germany’s total carbon emissions in 2009. It would also save money since heating and cooling account for about 56 percent of the energy use in an average U.S. home. Specifically, solar could provide more than 16 percent of total energy use for heating and 17 percent for cooling. Meeting that goal would include using solar collectors for hot water and space heating, solar collectors for low-temperature process heat in industry, and heating for swimming pools. It would also require a “rapid expansion of solar hot water heating in the building sector, including in solar supported district heating, as well as in industrial applications.” The report recommends that governments take the following actions over the next 10 years: Related Care2 Stories

SonUmbra Solar Powered Tree Lights up the Night As advancements in lighting technology unveil fresh materials, we’re thrilled to see designers exploring new ways to light up the night. SonUmbra is a solar-powered tree composed of strands of light-emitting fabric woven into a lucent web of branches. The installation’s canopy of photovoltaic panels captures light during the day, and once the sun sets the tree blooms in an interactive flourish of light and sound. We were thrilled to catch a glimpse of SonUmbra at this year’s London Design Festival, where its beautiful glow signaled a bright future for energy-efficient lighting. Designed by Loop.pH, the “sonic shade of light” is intended to be “planted” in remote areas, where it offers shelter from the sun by day and serves as a gathering place for the local community at night. The installation is constructed from a light emitting fabric that is crafted into a lattice of electroluminescent fibers. + SonUmbra + London Design Festival 2009 Coverage Lead photo by Antonia Halse for Inhabitat

Solar-Powered ‘Window Socket’ Lets You Charge Devices At Windows Designers Kyuho Song and Boa Oh have put their heads together to come up with a portable plug socket that, if created, will allow the user to utilize cost-efficient solar energy. All one would need in order to use The Window Socket is a window with lots of sunlight streaming through. Presently, we do have easy access to solar-powered backup battery devices. However, none of them features a direct plug-in feature like The Window Socket. Have a look at the images below to see if this device would be handy in your daily life: [via Yankodesign.com] Receive interesting stories like this one in your inbox