Robot Serves Up 360 Hamburgers Per Hour 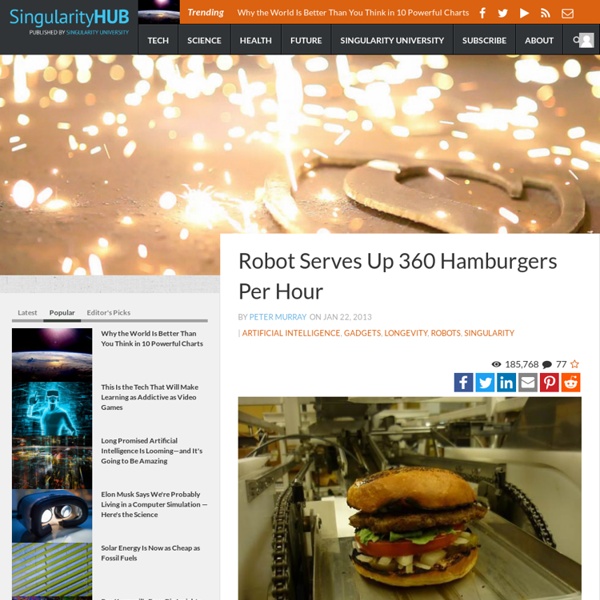 UPDATE: To read more about how workers will be affected by automation technology, check out Hub's follow up post Burger Robot Poised to Disrupt Fast Food Industry No longer will they say, “He’s going to end up flipping burgers.” Because now, robots are taking even these ignobly esteemed jobs. Alpha machine from Momentum Machines cooks up a tasty burger with all the fixins. And it does it with such quality and efficiency it’ll produce “gourmet quality burgers at fast food prices.” With a conveyor belt-type system the burgers are freshly ground, shaped and grilled to the customer’s liking. And while you fret over how many people you invited to the barbecue, Alpha churns out a painless 360 hamburgers per hour. San Francisco-based Momentum Machines claim that using Alpha will save a restaurant enough money that it pays for itself in a year, and it enables the restaurant to spend about twice as much on ingredients as they normally would – so they can buy the gourmet stuff. Peter Murray Related

The World’s First 3D-Printed Building Will Arrive In 2014 (And It Looks Awesome) Sure, 3D printing is fun and cute. And products like the Makerbot and Form 1 will most certainly disrupt manufacturing, even if it’s only on a small scale. But the possibilities of 3D printing stretch far beyond DIY at-home projects. In fact, it could entirely replace the construction industry. It's No Myth: Robots and Artificial Intelligence Will Erase Jobs in Nearly Every Industry - Singularity HUB With the unemployment rate falling to 5.3 percent, the lowest in seven years, policy makers are heaving a sigh of relief. Indeed, with the technology boom in progress, there is a lot to be optimistic about. Manufacturing will be returning to U.S. shores with robots doing the job of Chinese workers; American carmakers will be mass-producing self-driving electric vehicles; technology companies will develop medical devices that greatly improve health and longevity; we will have unlimited clean energy and 3D print our daily needs. The cost of all of these things will plummet and make it possible to provide for the basic needs of every human being.

Robot-writing increased AP’s earnings stories by tenfold Since The Associated Press adopted automation technology to write its earnings reports, the news cooperative has generated 3,000 stories per quarter, ten times its previous output, according to a press release from Automated Insights, the company behind the automation. Those stories also contained “far fewer errors” than stories written by actual journalists. The Associated Press began publishing earnings reports using automation technology in July for companies including Hasbro Inc., Honeywell International Inc. and GE. Appended to those stories is a note that reads “This story was generated automatically by Automated Insights ( using data from Zacks Investment Research. Full GE report: The stories include descriptions of each business and contain “forward-looking guidance provided by the companies,” according to the release.

When Do We Get Catbots? We Have the Technology We can all use an animal companion from time to time—a comforting presence that’s relatively low maintenance, warm, and furry. Pets offers no-drama company that’s hard to find in humans. Still, they come with a few extra responsibilities. You’ve got to find them a petsitter when you’re away, walk and feed them every day, clean up after them. The answer? Robotic pets.

The Rich and Their Robots Are About to Make Half the World's Jobs Disappear Two hugely important statistics concerning the future of employment as we know it made waves recently: 1. 85 people alone command as much wealth as the poorest half of the world. 2. 47 percent of the world's currently existing jobs are likely to be automated over the next two decades. Combined, those two stats portend a quickly-exacerbating dystopia. As more and more automated machinery (robots, if you like) are brought in to generate efficiency gains for companies, more and more jobs will be displaced, and more and more income will accumulate higher up the corporate ladder. Researchers say AI prescribes better treatment than doctors A pair of Indiana University researchers has found that a pair of predictive modeling techniques can make significantly better decisions about patients’ treatments than can doctors acting alone. How much better? They claim a better than 50 percent reduction in costs and more than 40 percent better patient outcomes. The idea behind the research, carried out by Casey Bennett and Kris Hauser, is simple and gets to the core of why so many people care so much about data in the first place: If doctors can consider what’s actually happening and likely to happen instead of relying on intuition, they should be able to make better decisions.

Hedge fund robots are crushing their human rivals Synopsis The hedge fund robots are winning again. In 2014, computer algorithm-led investing produced stellar returns, beating most human managers and recovering most of their losses from 2011, 2012 and 2013. Summary Soft Robot Keeps Moving, Even After Getting Run Over By A Car Thinking about robots usually conjures up images of metal structures from Terminator or iRobot. Roger Wood’s lab at Harvard University has gone in a slightly different direction and made an X-shaped soft-bodied robot that moves around like a headless toy. The robot can be exposed to fire or get run over by a car, coming out completely unscathed. The pneumatic soft-bodied robot was inspired by organisms that move without rigid structures. This will allow them to interact with humans more safely than traditional hard units, with possible applications for search and rescue or chemical disasters.

Laboratory Technicians - This Artificial Intelligence was 92% Accurate in Breast Cancer Detection Contest In Brief Scientists trained an AI machine to detect breast cancer in images of lymph nodes. AI Wins in Cancer Detection Contest A group of researchers from Beth Israel Deaconess Medical Center (BIDMC) and Harvard Medical School (HMS) have developed a way to train artificial intelligence to read and interpret pathology images. Scientists tested the artificial intelligence (AI) during a competition at the annual International Symposium of Biomedical Imaging, where it was tasked to look for breast cancer in images of lymph nodes.

Robot Replaces Student At Winchester Elementary School, Allows Devon Carrow To Attend Remotely (PHOTOS) WEST SENECA, N.Y. -- In an elementary school hallway, a teacher takes her second-graders to the library, leading a single-file line of giggling boys and girls that's perfectly ordinary until you get to a sleek white robot with a video screen showing the face of a smiling, chubby-cheeked boy. Devon Carrow's life-threatening allergies don't allow him to go to school. But the 4-foot-tall robot with a wireless video hookup gives him the school experience remotely, allowing him to participate in class, stroll through the hallways, hang out at recess and even take to the auditorium stage when there's a show. What's most remarkable is how unremarkable this gee-whiz technology is viewed by his classmates. In a class of 7-year-olds raised on video games, avatars and remote-controlled toys, they don't see a robot.

When Machines Can Do Most Jobs—Passion, Creativity, and Reinvention Rule - Singularity HUB Not long ago, schoolchildren chose what they wanted to be when they grew up, and later selected the best college they could gain admission to, spent years gaining proficiency in their fields, and joined a company that had a need for their skills. Careers lasted lifetimes. Now, by my estimates, the half-life of a career is about 10 years. I expect that it will decrease, within a decade, to five years. Advancing technologies will cause so much disruption to almost every industry that entire professions will disappear. And then, in about 15–20 years from now, we will be facing a jobless future, in which most jobs are done by machines and the cost of basic necessities such as food, energy and health care is negligible — just as the costs of cellphone communications and information are today.

Solar-Powered Robot Farmers Are Almost Ready to Start Working the Land So it looks like we're going to live to see the rise of the autonomous robot farmer after all. Or at least, the robot farmhand. There are plenty of promising agricultural automatons in the works, after all: We've got mechanized hydroponic factory farmers, self-propelling farmballs, and, now, solar-powered robots that collect data, pick weeds, and someday, harvest crops. That latest entrant is the Ladybird, the product of a $1 million research project helmed by the University of Sydney.

MIT's New Robo-Cheetah Bounds Across Terrain Untethered It’s not quite Robot Wars, but there’s a battle of the Cheetah bots going on in the robotics world. Back in 2012, Boston Dynamics unleashed its rather menacing looking Robo-Cheetah on the treadmill and it managed an impressive 28.3 miles per hour (45.5 kph) while tethered to a power supply, achieving the prestigious record of the world’s fastest mechanical mammal. Now, MIT researchers have unveiled their own version which managed 10 mph (16 kph) on an indoor track.

Chefs - Inside Silicon Valley’s Robot Pizzeria In the back kitchen of Mountain View's newest pizzeria, Marta works tirelessly, spreading marinara sauce on uncooked pies. She doesn’t complain, takes no breaks, and has never needed a sick day. She works for free.