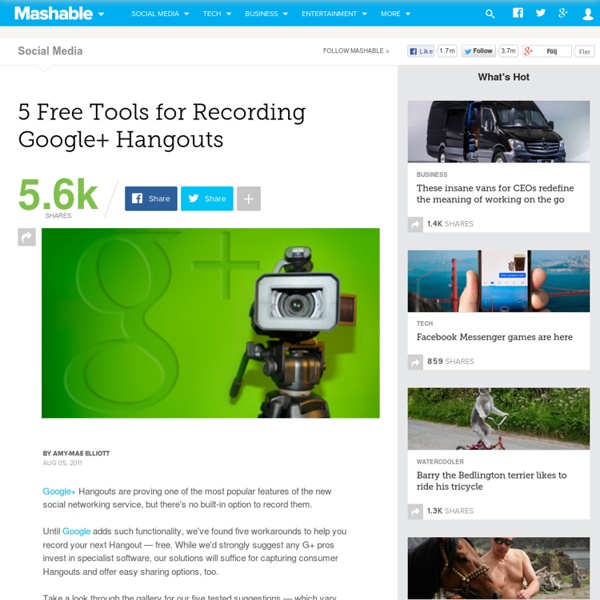 Summify - The Google+ Guide For Educators Home » Education, Social Media Written by Grace2 August 2011 Unless you've been living under a rock the last month, undoubtedly you've heard of the new social networking site everyone has been raving about: Google+. All this buzz has generated some great articles (my to-read pile just keeps growing!) Here's my Google+ Guide for Educators: So what do you think about Google+? Share this post with your friends and colleagues:

6 must-know Apps to make FREE Group Conference Calls Another quick guide from MakeUseOf, this time it’s on group calling and conference apps. The ones that are simple, quick to setup, free, and probably something you would want to use. What do you get? [NO LONGER WORKS] MeBeam – Online Video Conferencing Quick and simple way to setup informal video conference calls. ooVoo – Video Conferencing on your PC ooVoo is a free video chat program that lets you chat with up-to 6 people at the same time. Rondee – Phone Conference Calls Schedule phone conference calls and invite as many friends as you want. For complete features list go to Rondee: Phone Conference Calls Foonz – Free Group Calls Quite similar to the above Rondee, but you also get the option to send group voice messages and organize contacts into groups (i.e. family, freinds, work etc.). TalkShoe – Live Talk Shows and Conference Calls Online community where users can host, participate, or just listen to live interactive talk shows and discussions.

Google+ Building (or Re-Building) your PLN Twitter just became 5 years old and many of us can remember the first time: we heard of twitter… the first time we experienced powerful collaboration on twitter… some of us can even remember our first tweet (not me, though I can imagine it was something like: “I just don’t understand this…” So, for many it feels like a shock when after 5 years, thousands of tweets, hours of growing and grooming our personal learning network we look at Google+ and say, “I just don’t understand this…” or “Struggling to understand how this is going to fit in…” or “It just doesn’t do what Facebook or twitter does… or doesn’t do it as WELL…” Here are some other things that we are struggling with: “I have “spoken” with a person for years on twitter… but I only know them by his or her handle… – We are shocked that someone we really know so well: children, ailments, dreams, hopes, personal challenges… and we don’t even know his or her name. If you are feeling this way, know that you are not alone.

The 7 Best Video Chat Apps for Your Smartphone By Albert Costill The days of holding a phone conference are over. Today, it’s all about video chatting. Since nearly everyone has a smartphone capable of handling video chats, it’s no surprise more people are discussing business ventures and opportunities via their phones. Video chats are not only convenient – we’re always with our smartphones so we can hold a video chat wherever or whenever – it also offers the chance to talk to someone else face-to-face. That can sometimes go a long way. ooVoo You can log into this popular video chat app by using your Facebook account. Skype Skype is one of the oldest, and probably the most well-known, video chat apps out there. Tango Tango stands out for two reasons. Hangouts Since nearly everyone has Google these days, it shouldn’t be difficult to find another person with Hangouts. Peer Looking for a video chat app strictly for business? Viber Camfrog

Google and Facebook get personal in battle for social networking rewards | Media | The Observer Facebook founder Mark Zuckerberg has positioned the company as a money-spinning gateway to the web. Photograph: Mike Kepka/San Francisco Chronicle/Corbis It is one month since the launch of Google+, a belated attempt at a social networking tool that invites users to follow friends' activities in their news feed and share favourite content by marking it "+1". If this sounds familiar, it shows the extent to which Google is playing catchup with Facebook, which is brewing a public offering next year that could value the firm at $100bn and, critically, has positioned itself as the gateway to the web for many of its 750 million users. Much of this pressure is down to the abrasive ambition of Facebook founder Mark Zuckerberg. Ben Gomes has worked on every aspect of Google's core search product and is leading exploration into the social navigation of search. With data from so many consumers informing so many Google products, why isn't there more personalisation?

The 5 best alternative video chat apps—all completely free Regular phone calls are over—these days, it’s all about video chatting. If you’ve got a smartphone, you’re likely holding a video-chatting machine (in all its forward-facing 1.3 megapixel glory). And regardless of what OS your smartphone is running, it likely came with some built-in video chatting software. But what if you want to, I don’t know… call someone on a different platform? Or what if you need to chat with your entire rugby team at once? ooVoo—iOS, Android If Facebook is your main method of communication, you may want to check out ooVoo. The ooVoo app is simple and straightforward on both iOS and Android. Voice calling between ooVoo contacts is free and unlimited, but if you want to call regular numbers (both cellphones and landlines), you’ll have to cough up some cash for ooVoo credits. Tango— iOS, Android, Windows Phone 7.5 Tango is one of the most popular third-party video chat apps, and it’s not difficult to see why: It’s incredibly simple to use. Fring—iOS, Android

Google +: The Good, the Bad and the Ugly [a guest post by Aaron Strout] If you have a pulse, there is a good chance that you've heard the buzz about Google's latest foray into the world of social networking. Their new offering is called Google + (that's pronounced "Google Plus") and at first blush, it seems to have hit the mark. Although the new social network is still in closed beta (invite only), It has already amassed north of 10 million users. As someone that has spent time personally and professionally with social media for six plus years, I've been intrigued with the possibilities that Google + offers. The Good One of the main reasons that Google + is taking off the way it is is because they seem to have gotten the friending/privacy/social graph right via a convention called Circles. The circles come pre-set (although you can customize) so right out of the gate you can start adding people to buckets titled, "Family, Friends, Acquaintances, Following and Work." Lack of business pages also falls into the "bad" category.

So what is Google+ all about then? I've seen lots of blog posts and articles and discussions on what G+ is about, and how it is a this killer or that killer. If I had a penny for each of them I'd be quite rich. Does that stop me writing my own? Of course it doesn't. G+ isn't an anything killer. The problem that Google has always had is that its main method of making money - search - is at absolute odds with the end goal. Google has a bunch of different and interesting products - some of which directly provide you with adverts, such as Gmail, and others that don't, but even in that case, they're all part of the Google family. and at the other end of the screen, this: Wherever I go in the Google world I'm now seeing this. G+ is going to be adding new functionality in the coming weeks, and I'm guessing that just about every single major change that they make is going to be to embrace more of their resources. Do libraries/librarians really need to know this stuff? In my opinion, it's absolutely vital that they do.

Turn your iPad into a Production Switcher - RecoLive - MultiCam My Google+ Class @ the Library Two days ago I taught the first of two public classes about Google+ at my library. Three days after the private beta opened on June 28th, I scheduled the classes…figuring that by the time the class dates rolled around, I’d have something to say. They became part of our library’s summer Tech Boot Camp class series–20 tech classes from July to September. I didn’t realize that I was the first librarian teaching a Google+ class until people started pointing it out to me and asking for my class outline, learning plan, slides, etc. The class was a one-hour true introduction to the social network, giving people a tour of the profile set-up, privacy options, and many features. So here’s how I did the class. I distributed two printed handouts to the class: a graphic from Patrick Beja describing the differences between Google+, Facebook, and Twitter with the analogy of different kinds of parties.the Google Cheat Sheet created by Simon Laustsen (available in a dozen languages)