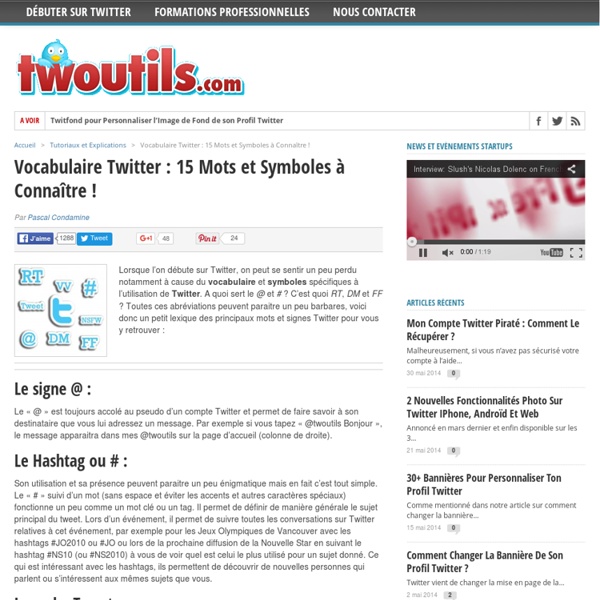 16 Creative Ways to Use Twitter for Business Is your Twitter activity feeling stale? The good news is that you can easily revitalize your Twitter experience! Here are 16 ways to bring new life and renewed business purpose to your Twitter efforts. Twitter in the Classroom As educators, we are preparing students to succeed in the real world. That’s why it’s imperative for students to be taught not only the ‘fun’ parts of social media, but how to be responsible. Prior to integrating social media in the classroom, it’s crucial to understand both its power and limitations. In two previous blogs we discussed the advantages for using Twitter to create a strong network and how to leverage your PLN with hashtags. Once educators understand the power of Twitter for their own professional needs, the next step is to think about how it could be best utilized in the classroom.

7 Must-Have Chrome Extensions For Twitter Addicts With over 300 million users, Twitter has evolved from a simple micro-blogging site to what is now known as the ‘SMS of the internet’. Based in San Fransisco, this social networking site is used by politicians, celebrities, and pretty much everyone who’s famous on the internet. The service allows users to share their thoughts in a succinct but fun way. So, if like millions of tweeters, you too have become a Twitter addict, then it’s about time you twitterized your Chrome with these essential tweeter-friendly extensions. Twitter Lists and why you should be using them Lilach Lilach is the founder and driving force behind Socialable, and highly regarded on the world speaker circuit. Forbes and Number 10 Downing Street have even been graced by her presence! In a nutshell, she’s a hugely connected and highly influential serial entrepreneur – the embodiment of Digitelligence.Listed in Forbes as one of the top 20 women social media power influencers and likewise as one of the top social media power influencers, she is one of the most dynamic personalities in the social media market, she actively leverages ethical online marketing for her clients and for Socialable.

Twitter In Schools-A Getting Started Guide The end of the school year is upon us however many are looking forward to next year. You may be thinking what can you do differently next year? How can you stand out above the crowd? How can your school become a larger part of the school community? 6 Incredible Examples Of How Twitter Predicts The Future 859 Flares Filament.io 859 Flares × Whilst in the past week, I wanted to focus on tips to help you get the most out of Twitter and using Facebook, there is something quite different about today’s post. How does predicting the future with the likes of Twitter and Facebook sound for you? Personally, I think this is really fascinating. At over 250 million Tweets sent every day, there is a hell of a lot of information out there.

11 Effective Twitter Strategies for Brands Brands are missing out on big opportunities to engage with consumers on Twitter by tweeting at the wrong time or in the wrong way, according to an interesting study from Buddy Media. The report, Strategies for Effective Tweeting: A Statistical Review, found that many brands aren’t using Twitter effectively and outlines the top strategies for engaging with consumers. Buddy Media looked at user engagement for the top 320 brands on Twitter between December 11, 2011 and February 23, 2012 to see how successful they were at getting @replies and retweets. Their engagement rates were also assessed to quantify the relationship between @replies and retweets based on their number of followers. Use these best practices and proven tactics to communicate effectively on Twitter: 1.

The A-Z Dictionary of Educational Twitter Hashtags Whether you’re a new or seasoned Twitter user, you likely come across confusing hashtags that probably look like a bunch of nonsense. First, What’s A Hashtag? The # symbol, called a hashtag, is used to mark keyword or topic in a Tweet. Any Twitter user can categorize or follow topics with hashtags.Those hashtags (usually) mean something and are a great way to get a tweet to appear in search results or discussion monitoring. For example, the popular #edchat hashtag is used by thousands of users every Tuesday. It makes it easy (sort of) for people to monitor what’s happening in the conversation rather than having to try and guess what topics you should search for.