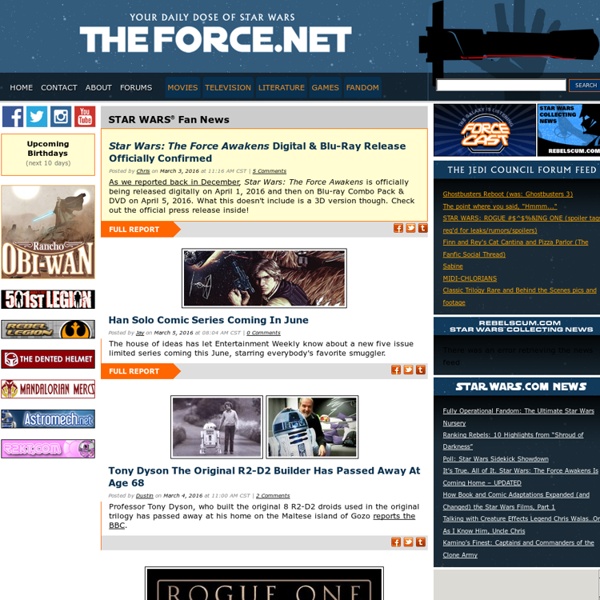 Star Wars Episode IV: A New Hope Lucas began writing the script to Star Wars after completing his previous film American Graffiti and based the plot outline on Akira Kurosawa's The Hidden Fortress and the 40's Flash Gordon serials. Lucas approached Alan Ladd, Jr. after United Artists and Universal Pictures rejected his script and the project was planned to be financed and released through 20th Century Fox. During this time, the script underwent numerous changes and Lucas founded Industrial Light & Magic to create the visual effects for the film. Filming began on March 22, 1976, and was shot in various locations in Tunisia, England and Guatemala. During production, Lucas and the crew encountered numerous problems such as weather problems, malfunctioning equipment, as well as budgetary concerns. Eventually, Lucas, along with producer Gary Kurtz and production supervisor Robert Watts, split the crew into three units to meet the studio's deadlines.

New RebelForce Radio Episode Talk To "The Simpsons" Michael Price. ~ The Bearded Trio Our hosts over at Rebelforce Radio bring us another episode and this time they talk to Michael Price about the lighter side of Star Wars. There is also some juicy news regarding the expansion of Star Wars at Disney Parks. Here's the summary and link: #25 Emperor Palpatine Rebel Storm Star Wars Miniatures Condition: Complete Miniature Including Card Emperor Palpatine #25 Rebel Storm Star Wars Miniatures Rebel Storm Very Rare Single Enjoy spectacular miniature combat straight out of the Original Trilogy! The Rebel Storm set features creatures and characters from the classic era of Star Wars, including Episodes IV, V, and VI of the Star Wars films. The Expansion Packs will include very rare figures that are not available in the Entry Pack.

Men In Red The Imperial Royal Guard, The elite line of troops, dedicated to protecting the Emperor. The most feared troops in the entire Empire, who grace our screen in Return of the Jedi for but a few moments, simply marching and standing....Nobody messes with these guys! Then we got the prequels...and again we only make a brief appearance in the last movie. Force (Star Wars) Lucas has attributed the origins of "The Force" to a 1963 abstract film by Arthur Lipsett, which sampled from many sources. One of the audio sources Lipsett sampled for 21-87 was a conversation between artificial intelligence pioneer Warren S. McCulloch and Roman Kroitor, a cinematographer who went on to develop IMAX. In the face of McCulloch's arguments that living beings are nothing but highly complex machines, Kroitor insists that there is something more: "Many people feel that in the contemplation of nature and in communication with other living things, they become aware of some kind of force, or something, behind this apparent mask which we see in front of us, and they call it God."When asked if this was the source of "the Force," Lucas confirms that his use of the term in Star Wars was "an echo of that phrase in 21-87." The Force is referenced several times throughout the Star Wars saga.

15 Star Wars Quotes to Use in Everyday Life Star Wars is overflowing with important themes and lessons we can translate and use in real life. Many of those big ideas are captured in a few lines of eminently quotable dialogue. Also, the saga has a lot of less serious one-liners that are just as memorable and applicable. I find myself working quotes from both sides of the coin into everyday conversations often, and I bet I’m not alone.

Kazza the Blank One: Lego Imperial Star Destroyer (10030) An Odyssey Begins I first saw a Lego Imperial Star Destroyer at the Power House Museum during the Star Wars Magic of Myth exhibition. Of course I immediately wanted one. But it would take nearly two years before the dream became a reality. After much drooling over sets that went on ebay, I finally took the plunge on a buy-it-now set. How the Tengwar evolved into the Cirth One of the earliest alphabets used in Middle-earth was the Tengwar. It was a highly structured, yet very flexible writing system that could easily be written with pen or brush. The Tengwar's only drawback was that it was difficult to use when inscribing onto metal, stone or wood. During the First Age, Elvish craftsmen in Beleriand developed a new alphabet that was almost entirely made from straight lines and could be easily engraved onto hard surfaces. This alphabet came to be known as the Cirth (meaning: "runes").

New Footage of Star Wars: The Force Awakens Debuts on Instagram! StarWars.com Team Kylo Ren saw something as he trudged through the trees of a dark snowy forest and ignited his now famous crossguard lightsaber. We don’t know what it was, but a new video teaser that just debuted on Star Wars’ Instagram account shows someone else in a similar-looking environment. We finally get to see Finn rock out a blue lightsaber, and he looks pretty eager to use it. Something big is about to go down. Please don’t be disappointed that this clip is only 15 seconds long. Dwarf Runes figure 3: Notes: * - These characters (or variations of these characters) are used or described in the beginning of the Houghton Mifflin editions of "The Hobbit". J.R.R Tolkien's use of Anglo/Saxon Runes in "The Hobbit" Primary source:

Star Wars Episode IV: Quotes Remember...the Force will be with you, always. For other uses of "Star Wars", see Star Wars. Written and directed by George Lucas. A long time ago in a galaxy far, far away... Taglines Opening Crawl[edit]