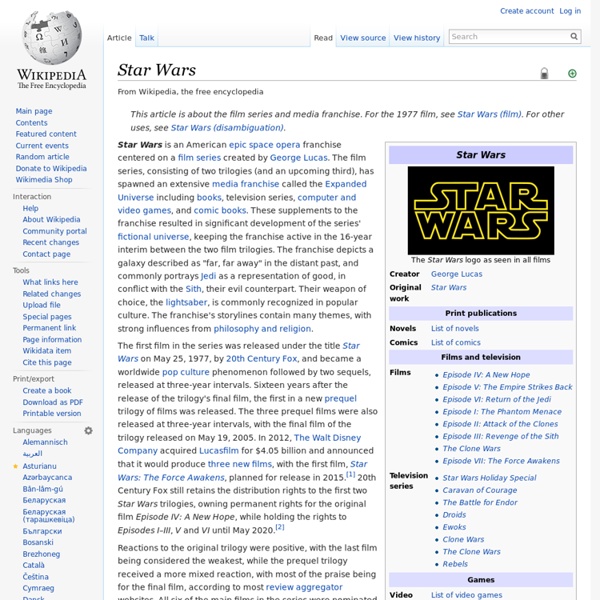 The Fellowship of The Ring (Part 1) Star Trek Star Trek has been a cult phenomenon for decades.[1] Fans of the franchise are called Trekkies or Trekkers. The franchise spans a wide range of spin-offs including games, figurines, novels, toys, and comics. Star Trek had a themed attraction in Las Vegas which opened in 1998 and closed in September 2008. At least two museum exhibits of props travel the world. The series has its own full-fledged constructed language, Klingon. Several parodies have been made of Star Trek. Conception and setting The Starfleet emblem as seen in the franchise. Most Star Trek stories depict the adventures of humans[Note 4] and aliens who serve in Starfleet, the space-borne humanitarian and peacekeeping armada of the United Federation of Planets. Roddenberry intended the show to have a highly progressive political agenda reflective of the emerging counter-culture of the youth movement, though he was not fully forthcoming to the networks about this. History and production Beginnings Rebirth After Roddenberry Reboot

Lord of The Rings Books Flight of the Phoenix (2004 film) In the middle of the night, Davis (Jared Padalecki) goes out to urinate without informing anybody, trips, gets lost in a sandstorm, and dies. The group panics after a failed search for him, and Kelly (Miranda Otto) argues with Frank, who says that walking out of the desert would fail and that their only option is to await rescue. The group initially agrees but reconsiders after Elliot, claiming to be an aeronautical engineer, pitches a radical idea: rebuild the wreckage of their C-119 into a functional aircraft. Through a series of photos, we see what became of the crew when they made it back to civilization. The set was the site of several mishaps: A ferry sank during transportation of a major set piece across a river, forcing the river bottom salvage of the aircraft fuselage. Four aircraft were used during the film: Fairchild C-119G, N15501 - flying shots. A Phoenix that could be taxied but not flown was built for closeups. The film did receive some praise.

The Two Towers (Part 2) The Flight of the Phoenix (1965 film) Though the film was a failure at the box office, it has since gained a cult following. Meanwhile, Dorfmann has been working on a radical idea: He believes they can build a new aircraft from the wreckage. The C-82 has twin booms extending rearwards from each engine and connected by the horizontal stabilizer. Dorfmann's plan is to attach the outer panel of the right wing to the left engine, left boom and left wing outer panel, discarding the center fuselage and both inner wing panels of the aircraft. Harris and Moran believe he is either joking or deluded, and the animosity between Towns the veteran pilot and Dorfmann the aircraft designer increases. Post-World War II anti-German sentiment also simmers under the surface. Although Towns is resistant, Renaud points out that activity, and any hope will keep the men's morale up and so Towns agrees with the plan. Final plans are made for the Phoenix's flight. Just as the water runs out, the Phoenix is completed. Cox, Stephen.

The Return of The King (Part 3) Heaven's Gate (film) There were major setbacks in the film's production due to cost and time overruns, negative press, and rumors about Cimino's allegedly overbearing directorial style. It is generally considered one of the biggest box office bombs of all time, and in some circles has been considered to be one of the worst films ever made. It opened to poor reviews and earned less than $3 million domestically (from an estimated budget of $44 million),[6] eventually contributing to the near collapse of its studio, United Artists, and effectively destroying the reputation of Cimino, previously one of the ascendant directors of Hollywood owing to his celebrated 1978 film The Deer Hunter, which had won Academy Awards for Best Picture and Best Director in 1979.[7] Cimino had an expansive and ambitious vision for the film and pushed it about four times over its planned budget. In 1870, two young men, Jim Averill (Kris Kristofferson) and William "Billy" Irvine (John Hurt), are graduating from Harvard College.

RANDOM BLUE DRAGON The Lone Ranger (2013 film) Filming was plagued with production problems and budgetary concerns, which at one point led to the film's premature cancellation.[5] The Lone Ranger was released theatrically in the United States on July 3, 2013. The film received mixed to negative reviews in the United States and mixed to positive reviews outside the country. It was a commercial failure, grossing $260 million worldwide against an estimated $225 million production budget plus an additional $150 million marketing budget. The film was nominated for Academy Awards for visual effects and hairstyling/makeup. At a sideshow in a San Francisco fair in 1933, a boy, Will, who idolizes a legend known as the Lone Ranger, encounters Tonto, an elderly Comanche Native American, who proceeds to recount his experiences with that Old West adventurer. In 1869 Colby, Texas, lawyer John Reid returns home via the uncompleted Transcontinental Railroad, managed by railroad tycoon Latham Cole.