Weird Space Bubbles May Have Caused US Battle Deaths. Operation Anaconda in March 2002 was one of the biggest military operations of the war in Afghanistan, pitting several thousand U.S., NATO and Afghan forces against Taliban and Al-Qaeda militants. 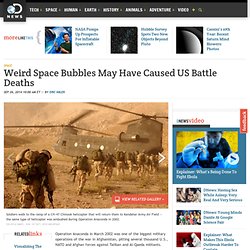 At one point in the early hours of of March 4, a team of Navy Seals found themselves trapped on the slopes of Taku Ghar, a snow-covered mountain dividing remote hostile valleys. The Seals warned a U.S. Chinook rescue helicopter with 21 men aboard not to land on the peak because the enemy had it surrounded, but the message wasn’t received. The chopper landed and three men died in a firefight. PHOTOS: Extreme Space Weather Bad communications plagued Operation Anaconda, and now researchers say that a strange space weather phenomena was to blame: plasma bubbles.

Joe Comberiate, a physicist at Johns Hopkins University’s Applied Physics Laboratory, is a co-author of the new study along with colleague Michael Kelly. PHOTOS: Epic Aurora Photos From the Space Station. Can facilities like HAARP be used to manipulate the weather? The High Frequency Active Auroral Research Program (HAARP) which was shut down in early May 2013, generated quite a bit of controversy over its alleged weather control capabilities. 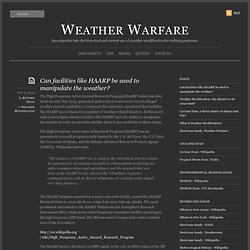 Conspiracy theorists have speculated that facilities like HAARP are to blame for a number of weather related disasters. In this post I wish to investigate whether facilities like HAARP have the ability to manipulate the weather in order to ascertain whether there is any credibility to these claims. The High Frequency Active Auroral Research Program (HAARP) was an ionospheric research program jointly funded by the U.S.

Air Force, the U.S. Navy, the University of Alaska, and the Defense Advanced Research Projects Agency (DARPA). Air Force Bombshell: Admits They Can Control Weather - HAARP. By Susan Duclos While HAARP and weather control has been called a conspiracy theory by the mainstream media and government officials, during a Senate hearing on Wednesday, David Walker, deputy assistant secretary of the Air Force for science, technology and engineering, dropped a bombshell in answer to a question asked by Lisa Murkowski in relation to the dismantling of the $300 million High Frequency Active Auroral Research Program in Gakona this summer. 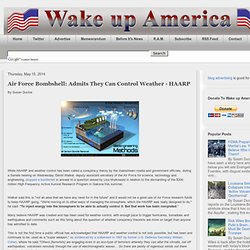 Ton Begemann’s strange Paleo-Eskimo Artic-agriculture claim. Geoengineering side effects could be potentially disastrous, research shows. Large-scale human engineering of the Earth's climate to prevent catastrophic global warming would not only be ineffective but would have severe unintended side effects and could not be safely stopped, a comparison of five proposed methods has concluded. 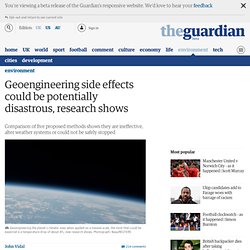 Science academies around the world as well as some climate activists have called for more research into geoengineering techniques, such as reflecting sunlight from space, adding vast quantities of lime or iron filings to the oceans, pumping deep cold nutrient-rich waters to the surface of oceans and irrigating vast areas of the north African and Australian deserts to grow millions of trees.

Each method has been shown to potentially reduce temperature on a planetary scale. But researchers at the Helmholtz Centre for Ocean Research Kiel, Germany, modelled these five potential methods and concluded that geoengineering could add chaos to complex and not fully understood weather systems. Want to know about HAARP, VLF, VHF, RADAR, and Weather Modification ?

Pictured below: HAARP in Gakona, Alaska (website turned off during current government experimentation schedule) All links below should satisfy MOST questions – save the pdf’s before they’re gone for good ! 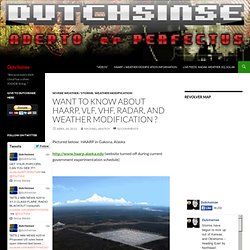 Weather control being planned for several years (decades): Move forward 35 years …quote Secretary of Defense William Cohen : DARPA allocates funds for the use of HAARP Here are actual budgets allocated by the Department of Defense / .pdf from DARPA.mil — 2012 and 2013: www.darpa.mil/WorkArea/DownloadAsset.aspx? Download the .pdf from my site here: FY2013 Budget Estimates. Vol3ch15.pdf. Weather War? THE huge mushroom cloud soared skywards, the captain was gripped by fear, believing his plane was about to be engulfed by the fall-out from a nuclear explosion. 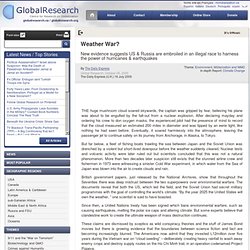 After declaring mayday and ordering his crew to don oxygen masks, the experienced pilot had the presence of mind to record that the cloud measured an estimated 200 miles in diameter and was tipped by an eerie light, like nothing he had seen before. Eventually, it soared harmlessly into the atmosphere, leaving the passenger jet to continue safely on its journey from Anchorage, in Alaska, to Tokyo. But far below, a fleet of fishing boats trawling the sea between Japan and the Soviet Union was drenched by a violent but short-lived downpour before the weather suddenly cleared. Nuclear tests and volcanic activity were later ruled out but scientists concluded that this was not a natural phenomenon. Rothschild’s, And The Geoengineering Empire » Rothschild’s, And The Geoengineering Empire.

Why would the Rothschild’s be so interested in owning the largest and most recognized weather modeling organization out there? 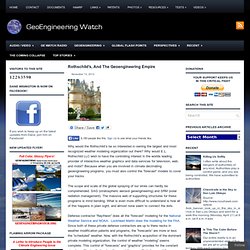 Why would E.L. Rothschild LLC wish to have the controlling interest in the worlds leading provider of interactive weather graphics and data services for television, web, and mobil? Because when you are involved in climate decimating geoengineering programs, you must also control the “forecast” models to cover your tracks.