Water privatisation: a worldwide failure? Jimmy Orogobeni, now 25, has been waiting all his life for safe clean water in his Lagos home. 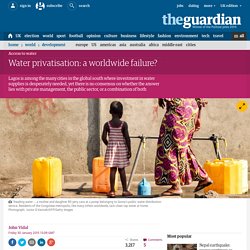 Why India and China should leave the Yarlung Tsangpo alone. This is part of a special series of articles produced by our sister site thethirdpole.net on the future of the Yarlung Tsangpo river - one of the world's great transboundary rivers - which starts on the Tibetan Plateau before passing through India and Bangladesh. 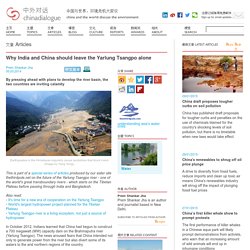 Also read:- It's time for a new era of cooperation on the Yarlung Tsangpo - World's largest hydropower project planned for the Tibetan Plateau - Yarlung Tsangpo river is a living ecosytem, not just a source of hydropower In October 2012, Indians learned that China had begun to construct a 700 megawatt (MW) capacity dam on the Brahmaputra river (Yarlung Tsangpo). The news aroused fears that China intended not only to generate power from the river but also divert some of its waters to the arid northern regions of the country. This possibility was first mentioned at the international conference of the Global Infrastructure Fund in Anchorage, Alaska, in 1986. Water levels dip in India’s reservoirs. Story Map: What is the impact of China’s mega water diversion scheme? Our interactive map illustrates the impact of China’s controversial South-North Water Transfer project, as water finally reached Beijing last week China’s South-North Water Transfer Project – the world’s largest engineering project – will eventually pump 45 billion cubic metres of water each year from the Yangtze to the Yellow River to feed the cities and coal fields of northern and western China, which are running out of water. 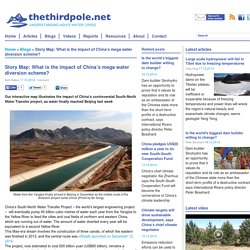 The amount of water diverted every year will be equivalent to a second Yellow River. The project, now estimated to cost 500 billion yuan (US$80 billion), remains a government priority, despite controversy over its expense, impacts on agriculture and mass relocations of communities. Explore this story map to discover how the mega diversion scheme will affect different areas of China and the problems that have emerged since construction began in 2002. Large scale hydropower will fail in Tibet due to freezing temperatures. Hydropower dams on the Tibetan plateau will be inefficient or inoperable because of freezing temperatures and power lines will wreck the region’s natural beauty and exacerbate climate changes, warns geologist Yang Yong The frozen Yarlung Tsangpo river just before it enters India – freezing temperatures pose a risk to hydropower infrastructure (Image by Yang Yong) Driving into Tibet is already an increasingly popular choice for tourists – the pristine scenery is some of the best anywhere in the world. 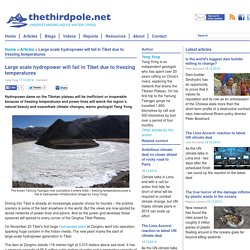 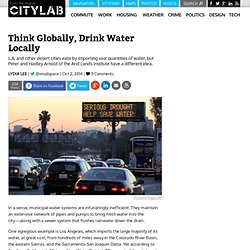 They maintain an extensive network of pipes and pumps to bring fresh water into the city—along with a sewer system that flushes rainwater down the drain. One egregious example is Los Angeles, which imports the large majority of its water, at great cost, from hundreds of miles away in the Colorado River Basin, the eastern Sierras, and the Sacramento-San Joaquin Delta. Yet according to Southern California's Metropolitan Water District, 82 percent of the city's water needs could be met locally, through recycling, conservation, and the strategic harvesting of rainwater. This is the big organizing concept behind the current work of the Arid Lands Institute, a tiny design think tank run by Peter and Hadley Arnold at Woodbury University in L.A. "Cities are currently designed to rid us of rainwater as fast as we can, to mitigate flood concerns," Peter Arnold says. Thinning Ice. Art & Design / As Art Basel and Design Miami simultaneously unfurl their cultured glitz and glam under the Floridian sun, photographer and filmmaker James Balog is keen to remind us that many miles away, the glaciers of Greenland, Nepal, and Alaska are depleting by the hour. 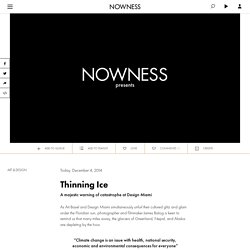 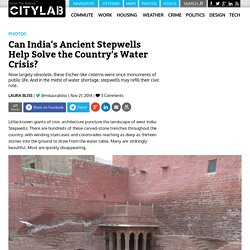 There are hundreds of these carved-stone trenches throughout the country, with winding staircases and colonnades reaching as deep as thirteen stories into the ground to draw from the water table. Many are strikingly beautiful. Most are quickly disappearing. Emerging somewhere around the fourth century A.D., stepwells guaranteed a year-round water supply for drinking, washing, and irrigation to villages, particularly in the semi-arid states of Gujarat and Rajasthan. By the 11th century, they'd become canvases for grand, stylistically diverse architectural visions, and served purposes well past the utilitarian. For women, to whom the task of gathering water often fell, these were (and in many cases remain) places for social gathering. Tibetan plateau faces massive “ecosystem shift” Tibetan plateau will experience significant “ecosystem shift” due to climate change and human activities, reducing future water supply to China and South Asia Desertification along the road from Lhasa to Shigatse (Image by Greenpeace) Large areas of grasslands, alpine meadows, wetlands and permafrost will disappear on the Tibetan plateau by 2050, with serious implications for environmental security in China and South Asia, a recent research paper published by scientists at the Kunming Institute of Botany has warned. 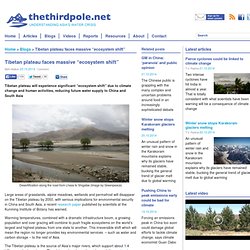 Warming temperatures, combined with a dramatic infrastructure boom, a growing population and over grazing will combine to push fragile ecosystems on the world’s largest and highest plateau from one state to another. Water scarcity an immediate threat to global businesses: Survey/ The analysis by CDP is based on the water management data of 174 companies listed on the FTSE Global 500 Equity Index. 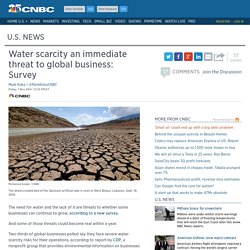 Companies include Merck, Unilever and Swedish clothing company H&M. Key findings include: Mapping The World's Water Conflicts Shows Trouble Ahead. If the wars of the past tended to be about territory and oil, the wars of the future could be about water. 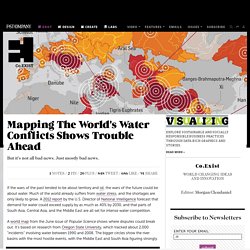 Much of the world already suffers from water stress, and the shortages are only likely to grow. A 2012 report by the U.S. Director of National Intelligence forecast that demand for water could exceed supply by as much as 40% by 2030, and that parts of South Asia, Central Asia, and the Middle East are all set for intense water competition. A world map from the June issue of Popular Science shows where disputes could break out. It's based on research from Oregon State University, which tracked about 2,000 "incidents" involving water between 1990 and 2008.

Actually, the message isn't all negative. Which perhaps should give us hope that scarcity doesn't lead inexorably to conflict, at least not when people want to work things out. Water Wars in Iraq and Around the World. Tens of thousands of desperate Iraqis who fled Mosul, Iraq’s second largest city under assault by Islamic State of Iraq and the Levant forces, are dying or at risk of dying of dehydration atop Mount Sinjar.

Water is now coming down from the sky—not as rain, but in the form of U.S. humanitarian airdrops. Fifteen thousand gallons of fresh water along with food is reaching thirsty, hungry and frightened people. Meanwhile, back in Mosul, reports are that ISIL has taken control over Iraq’s largest dam. The Mosul Dam, also known as the “Saddam Dam.” paradoxically, supplies millions of gallons of water and power to that region. For ISIL, control of the dam would be a strategic weapon in their ongoing campaign to root out anyone who fails to adopt their extremist views. Companies proclaim water the next oil in a rush to turn resources into profit. “Is now the time to buy water?” Enquired the email that showed up in my inbox earlier this week.

Its authors weren’t worrying about my dehydration levels. Rather, they were urging me to think of water in quite a new way: as a commodity to invest in. Making money from water? Is this what Wall Street wants next? After spending nearly 30 years of my life writing about business and finance, including several years dedicated to the commodities market, the idea of treating water as a pure commodity – something to bought and sold on the open market by those in quest of a profit rather than trying to deliver it to their fellow citizens as a public service – made me pause.

Sure, I’ve grown up surrounded by bottled mineral water – Evian, Volvic, Perrier, Pellegrino and even more chi-chi brands – but that has always existed alongside a robust municipal water system that delivers clean water to whatever home I'm occupying. Vietnam demands halt to Mekong dams. Anti-dam sentiment is spreading across China’s downstream neighbours, Cambodia, Myanmar and now Vietnam Popular resentment against dams is growing in Vietnam and Cambodia (Image by International Rivers) A new Turkish aggression against Syria: Ankara suspends pumping Euphrates’ water. The Turkish government recently cut off the flow of the Euphrates River, threatening primarily Syria but also Iraq with a major water crisis. Al-Akhbar found out that the water level in Lake Assad has dropped by about six meters, leaving millions of Syrians without drinking water. Two weeks ago, the Turkish government once again intervened in the Syrian crisis.

This time was different from anything it had attempted before and the repercussions of which may bring unprecedented catastrophes onto both Iraq and Syria. Violating international norms, the Turkish government recently cut off the water supply of the Euphrates River completely. In fact, Ankara began to gradually reduce pumping Euphrates water about a month and half ago, then cut if off completely two weeks ago, according to information received by Al-Akhbar. Egypt and Ethiopia spar over the Nile. William Lloyd-George/AFP/Getty Images On Jan. 8, Ethiopia turned down Egypt’s demand that it suspend construction of its mega-dam on the Nile, further escalating tensions between the two states.

Fearing that Ethiopia’s $4.2 billion project would reduce the river’s flow, Egypt calls for a halt in construction until the dam’s downstream impact is determined. Otherwise, it has vowed to protect its “historical rights” to the Nile at “any cost.” India and China compete for South Asia’s water resources. RIVERS shared between countries are a major factor in water-related controversies and disputes. Dam building in Tibet increasing earthquake risks. The problem with problems of water scarcity in South Asia. China cooperates with Central Asia over shared rivers. China has taken surprising steps to cooperate with Kazakhstan over shared rivers, but is unlikely to extend such generosity to its neighbours in South Asia, argues Sebastian Biba China has a bad record when it comes to water cooperation.

China Conducted Nuclear Blasts in Tibet to Divert Brahmaputra River: Report. August 29, 2013 3:35 pm DHARAMSHALA: China has conducted 3-4 nuclear blasts in Tibet to divert the Brahmaputra river, raising India’s concern that its share of water would be reduced and that China could use it as a leverage against India by releasing water at anytime it wished, according to The Times of India, a leading Indian daily. (read news report) China and India 'water grab' dams put ecology of Himalayas in danger. Pakistan's New Big Threat Isn't Terrorism—It's Water - Aziz Nayani. The world water shortage looks unsolvable. The Tibetan Plateau: The World's 21st Century Water Battleground by Jean-Pierre Lehmann & Nina Ninkovic.