United Federation of Trek. Klingon Props and Costume, Koval Costume. Welcome to my "Sci-Fi" pages. Hello, and Greetings to all you Star Trek / Klingon Enthusiasts! Scroll down and click on the icon of choice! NOTE: These pages are a reconstruction of my old web sites, originally on GeoCities. A few years ago I got "whacked" and all my on line data files went missing. The images were recovered eventually from other people's archives or simply made over as new.

The "Source" for all this madness > This Star Trek DVD Collection. I have almost all of Star Trek . . . . . . all sorted into that one 'CaseLogic' disk briefcase by rough in-story time line. I currently have Enterprise, The Original Series, The Animations, STNG, DS-9, "Of Gods and Men", and all 11 Feature Movies! MY BACKGROUND in SCI-FI... At first I bought as much prefabricated (somebody else made 'em) items as possible, but I later did a great deal of prop creation and costume building my own self.

I've since done the Susan B. Click on the link below: Jammer's Reviews - Star Trek, Battlestar Galactica, and more. Roddenberry.com: Where SciFi Begins - Roddenberry.com. Academy Mission Statement. The Star Trek Prop, Costume & Auction Blog. Star Trek Comics Checklist. Star Trek - Sci Fi Blog. Word Press Blogs about Star Trek. Soul of Star Trek. Star Trek News. My Star Trek Scrapbook. Starlog #1 Color Star Trek Section. When the first issue of Starlog came out in the July of 1976 (see the cover here), fans like me didn't just embrace it, we ran up to it on the magazine rack and placed wet sloppy kisses over it as we wept for joy. 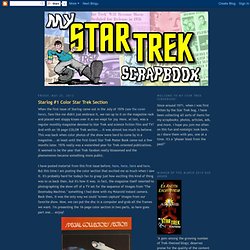 Here, at last, was a regular monthly magazine devoted to Star Trek and science fiction film and TV! And with an 18 page COLOR Trek section... it was almost too much to believe. This was back when color photos of the show were hard to come by in a magazine... at least until the first Giant Star Trek Poster Book came out a few months later. 1976 really was a watershed year for Trek-oriented publications. It seemed to be the year that Trek fandom really blossomed and the phenomenon became something more public. I have posted material from this first issue before; here, here, here and here. Alltop - Top Star Trek News. Cool Stuff: Star Trek Home Theater. Someone thought it would be a good idea to model their home theater after the Enterprise NCC-1701D from Star Trek: The Next Generation. 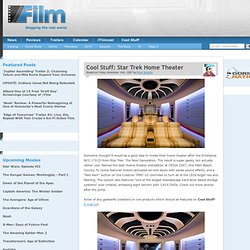 The result is super geeky, but actually rather cool. Named the best theme theater installation at CEDIA 2007, this Palm Beach County, FL home features motion-activated air-lock doors with series sound effects, and a “Red Alert” button on the Crestron TPMC-10 controller to turn all of the LEDs bright red and flashing. The system also features “one of the largest Kaleidescape hard-drive based storage systems” ever created, amassing eight servers with 3,816 DVDs. Check out more photos after the jump. Know of any geekarific creations or cool products which should be featured on Cool Stuff? Via: electronichouse Cool Posts From Around the Web: TrekToday. TrekWeb - Star Trek, J.J. Abrams, Spock, Kirk, Uhura. The Evolution of 'Star Trek'(Infographic) On Sept. 8, 1966, an American science fiction icon was born. 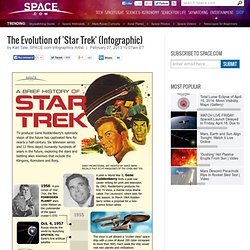 The “Star Trek” television show lasted only three seasons, but spawned a lasting legacy that has stretched across decades and led to four spinoff live-action shows, a cartoon series and a dozen feature films. Gene Roddenberry and his team set their show aboard the U.S.S. Enterprise, a sophisticated starship with a competent crew of professional astronauts. A pilot episode starring Jeffrey Hunter was rejected by the NBC TV network as “too cerebral” for a general audience. The show was retooled with William Shatner in the starring role of Captain James T. After its cancellation in 1969, the show grew even more popular, appearing several times per week (or even daily) in syndication. The Star Wars phenomenon of 1977 led Roddenberry to consider bringing the show back to television.

In 1987, Roddenberry created a new TV show from the ground up with an entirely new cast led by Patrick Stewart as Captain Jean-Luc Picard. STARTREKFANS.NET - Unreal Portal. The source for Star Trek news and information. The Greatest Star Trek Quotes. <--Back to the greatest movie, TV, and song lines It can be argued that a human is ultimately the sum of his experiences. 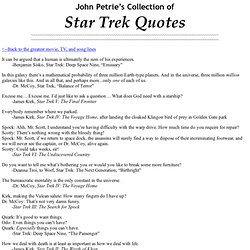 -Benjamin Sisko, Star Trek: Deep Space Nine, “Emissary” In this galaxy there’s a mathematical probability of three million Earth-type planets. And in the universe, three million million galaxies like this. And in all that, and perhaps more...only one of each of us. Star Trek Movies — Your guide to Star Trek movies and everything Trekkie. Star Trek Homepage. Ex Astris Scientia - Bernd Schneider's Star Trek Site.