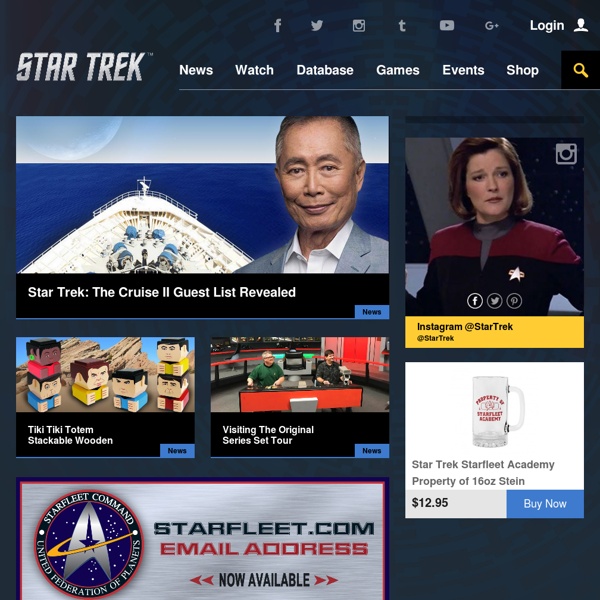 The Greatest Star Trek Quotes <--Back to the greatest movie, TV, and song lines It can be argued that a human is ultimately the sum of his experiences. -Benjamin Sisko, Star Trek: Deep Space Nine, “Emissary” In this galaxy there’s a mathematical probability of three million Earth-type planets. Get Yourself Star Trek Computer Sounds Star Trek fans are usually technology fanatics. This stems from the fact that if you grew up when any “generation” of Star Trek episode was on, then you quickly became obsessed with the cool gadgets that the Star Trek crew carried and used throughout the ship (or on planets). Now that the world has progressed with tremendous technological advancements, many of those technologies are now a reality. Just last week, I had my temperature scanned with a probe that the nurse simply ran across my forehead. I had to double check to make sure I hadn’t just entered the Enterprise sick bay.

Star Fleet Battles Star Fleet Battles is the flagship of the Star Fleet Universe. It is a game of ship-vs-ship combat in the 23rd century. When playing Star Fleet Battles, YOU take command of a starship, squadron, or even an entire fleet of the Federation, the Klingon Empire, or the Romulan Star Empire ... plus over a dozen other empires, each with their own unique style of combat, starships, weapons, technology, and culture. Out-Shoot, Out-Think, and Out-Fly your opponent in a deep-space dogfight!

Cool Stuff: Star Trek Home Theater Someone thought it would be a good idea to model their home theater after the Enterprise NCC-1701D from Star Trek: The Next Generation. The result is super geeky, but actually rather cool. Named the best theme theater installation at CEDIA 2007, this Palm Beach County, FL home features motion-activated air-lock doors with series sound effects, and a “Red Alert” button on the Crestron TPMC-10 controller to turn all of the LEDs bright red and flashing. The system also features “one of the largest Kaleidescape hard-drive based storage systems” ever created, amassing eight servers with 3,816 DVDs. Check out more photos after the jump. Know of any geekarific creations or cool products which should be featured on Cool Stuff?

Star Fleet Battles Star Fleet Battles (or SFB) is a tactical ship-to-ship combat game created by the Amarillo Design Bureau and published by the now-defunct Task Force Games beginning in 1979. Amarillo Design Bureau now publishes the game independently. The principal designer is Stephen V. Cole, an engineer and former US Army military intelligence officer. It has undergone heavy revision and expansion since it was originally released and is the oldest and most thoroughly tested Star Trek-based game in existence.

The Evolution of 'Star Trek'(Infographic) On Sept. 8, 1966, an American science fiction icon was born. The “Star Trek” television show lasted only three seasons, but spawned a lasting legacy that has stretched across decades and led to four spinoff live-action shows, a cartoon series and a dozen feature films. Gene Roddenberry and his team set their show aboard the U.S.S. Enterprise, a sophisticated starship with a competent crew of professional astronauts. A pilot episode starring Jeffrey Hunter was rejected by the NBC TV network as “too cerebral” for a general audience.