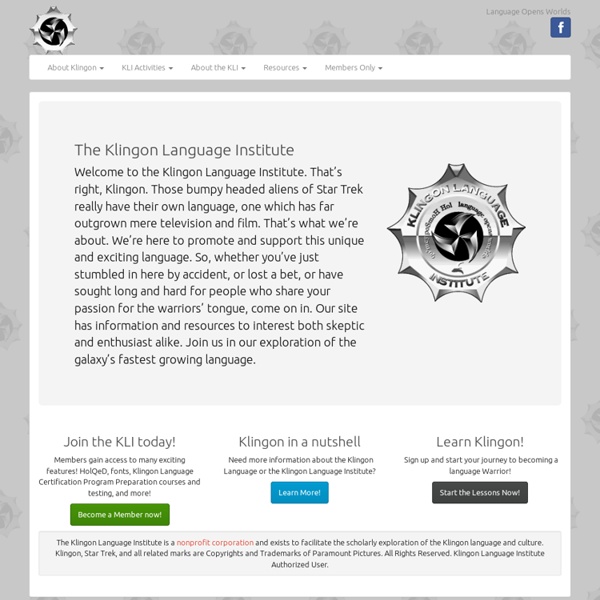 Welcome to the Klingon Language Institute. That's right, Klingon. Those bumpy headed aliens of Star Trek really have their own language, one which has far outgrown mere television and film. That's what we're about. We're here to promote and support this unique and exciting language. So, whether you've just stumbled in here by accident, or lost a bet, or have sought long and hard for people who share your passion for the warriors' tongue, come on in.

Pig Latin Rules what is pig latin? Pig Latin is a language game of alterations played in English. To form the Pig Latin form of an English word the onset of the first syllable is transposed to the end of the word and an ay is affixed (for example, trash yields ash-tray and plunder yields under-play and computer yields omputer-cay). The purpose of the alteration is to both obfuscate the encoding and to indicate for the intended recipient the encoding as 'Pig Latin'. The reference to Latin is a deliberate misnomer, as it is simply a form of jargon, used only for its English connotations as a 'strange and foreign-sounding language Another version is to take the first letter from the word (unless a vowel) and put it at the end with an added ay.

Klingon language The Klingon language (tlhIngan Hol, pronounced /ˈt͡ɬɪ.ŋɑn xol/) is the constructed language spoken by the fictional Klingons in the Star Trek universe. Described in the 1984 book The Klingon Dictionary by Marc Okrand and deliberately designed to sound "alien", it has a number of typologically uncommon features. The language's basic sound, along with a few words, was first devised by actor James Doohan ("Scotty") for Star Trek: The Motion Picture. USC professor creates an entire alien language for 'Avatar' James Cameron has big aspirations for “Avatar,” and here at Hero Complex we’re stepping up with some epic coverage plans: a 30-day countdown. Today’s topic: The USC professor who found himself on an unexpected Hollywood adventure when he was hired to create the language spoken by aliens on Cameron’s distant planet of Pandora. This modern era of moviemaking has plenty of peculiar challenges for actors — on green-screen sets, for instance, they have to watch a ping-pong ball hanging from a string and convince the camera that they actually staring down some magical beastie — but for the actors auditioning for “Avatar” the biggest challenge may have been reading a sheet of paper with words invented by a USC professor named Paul R. Frommer. Frommer, a linguistics specialist, was brought in by “Avatar” writer-director James Cameron to create an entire functioning language for the tribe of 10-foot-tall blue aliens who inhabit Pandora, the setting for the film’s conflict.

Whedonology: An Academic Whedon Studies Bibliography Welcome to the Whedon Studies Bibliography! This always-evolving listing of academic articles and essays (and some pseudo-academic)* is broken down into two sections: The first includes published materials such as essays in print and online journals and collections, theses and dissertations, books on Buffy the Vampire Slayer, Angel, Firefly/Serenity, Dollhouse, and other Joss Whedon works such as Dr. Horrible's Sing-Along Blog and Fray, and also some unpublished conference papers otherwise made available on websites such as the Slayage conference archive.

Star Fleet Battles Star Fleet Battles is the flagship of the Star Fleet Universe. It is a game of ship-vs-ship combat in the 23rd century. When playing Star Fleet Battles, YOU take command of a starship, squadron, or even an entire fleet of the Federation, the Klingon Empire, or the Romulan Star Empire ... plus over a dozen other empires, each with their own unique style of combat, starships, weapons, technology, and culture. Out-Shoot, Out-Think, and Out-Fly your opponent in a deep-space dogfight!

Star Trek Online Setting[edit] Each player is the captain of his own individual ship, utilizing any and all officers who have access to a ship, including the player's character. In keeping with naval tradition, anyone who commands a ship, regardless of his or her actual rank, is considered a de facto "captain".[7] Currently, there are three factions available: Federation; Klingon; and Romulan, and players can create characters from any of these factions at level 1.[8] Previously, Klingon characters could only be unlocked at and after level 25, and Romulan characters were not available. Bridge officers have a separate progression, including the purchase of skills and equipment, and can be promoted to higher ranks by their ships' captains.

Learn 35+ Languages for Free in iTunes I was just browsing iTunes for poignant Morrissey covers when I discovered nearly a thousand free language courses on iTunes. 926 courses to be exact. Holy Moleskine, Batman! The extensive library of courses span over 35 languages, from Arabic to Yiddish. Each course comes as a convenient podcast which you can subscribe and put on your iPod or iPhone. Feminist Intersection: On hipsters/hippies and Native culture Lately I've had my fair share of run-ins with the hipsters and hippies, as well as the hippie/hipster "culture" at large, and have become increasingly annoyed at their depiction/co-option of my ethnicity as a First Nations person. by Jen Musari, on the Native Appropriations website Kelsey pointed me to this post on Sociological Images last week which rounds up some of the latest and greatest of this ever continuing trend.

Star Fleet Battles Star Fleet Battles (or SFB) is a tactical ship-to-ship combat game created by the Amarillo Design Bureau and published by the now-defunct Task Force Games beginning in 1979. Amarillo Design Bureau now publishes the game independently. The principal designer is Stephen V. Cole, an engineer and former US Army military intelligence officer. It has undergone heavy revision and expansion since it was originally released and is the oldest and most thoroughly tested Star Trek-based game in existence.

Akademien - pIqaD, And How to Read It. Contents Preface Throughout this document a text on a green background is used to mark a quote from Okrandian Canon… …while a red background is used to indicate that the text is a quote from some other material. This is the beginning of an investigation into the Klingon alphabet and its typographical and phonological nuances. Since there does not really exist any canon Klingon alphabet (Okrand speaks about pIqaD but he never makes use of it.) What Is Cultural Appropriation and Why Is It Wrong? The United States has long been known as a melting pot and, more recently, as a salad bowl. Because people from hundreds of different ethnic backgrounds make up the nation’s population, it’s not surprising that at times cultural groups rub off on each other. Americans who grow up in diverse communities may pick up the dialect, customs and religious traditions of the cultural groups that surround them. Cultural appropriation is an entirely different matter, however. It has little to do with one’s exposure to and familiarity with different cultures.

Hydran in battle vs Lyran & Klingon The Coalition turn left Kzinti space in a real mess. There were plenty of lightly-defended targets, but at the same time, the Hegemony Navy was not in the best of shape itself. I resolved to limit myself to a few important goals and concentrate on them.

i am glad you like it . thanks by chefthanya Aug 20