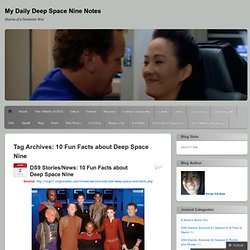 There were several crossover episodes between the two shows, and two of the Next Generation characters, the Irish Chief of Operations Miles O’Brien and the Klingon Worf, became regular members of the Deep Space Nine cast. 2) Bond Girl ex-model Famke Janssen was originally offered the role of Jadzia Dax. The character was planned as an alien from a low-gravity world, forced to use a wheelchair and fly around her quarters, but the concept was eventually scrapped. Star Trek: Deep Space Nine TV mistakes. Sisko Wanted to Be Bald and Other Things You Might Not Know about Deep Space Nine. In 1993, Star Trek began a bold experiment: a series set on a fixed location. 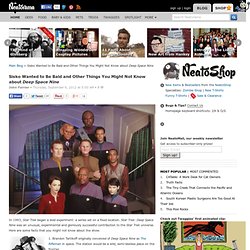 Star Trek: Deep Space Nine was an unusual, experimental and gloriously successful contribution to the Star Trek universe. Here are some facts that you might not know about the show. 1. Brandon Tartikoff originally conceived of Deep Space Nine as The Rifleman in space. The station would be a wild, semi-lawless place on the frontier. 2. It’s like the difference between a one-night stand and a marriage. 3. 4. 5. 6. 7. From left to right: Kor (John Colicos), Koloth (William Campbell) and Kang (Michael Ansara). 10. 11. (Video Link) Behr's references gradually became more overt in the hope of suggesting to viewers that the defenders of Deep Space Nine would be, like the Texans, overrun and massacred by their enemies. 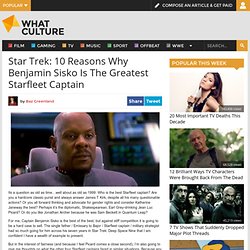 Who is the best Starfleet captain? Are you a hardcore classic purist and always answer James T Kirk, despite all his many questionable actions? Or you all forward thinking and advocate for gender rights and consider Katherine Janeway the best? Perhaps it’s the diplomatic, Shakespearean, Earl Grey-drinking Jean Luc Picard? Or do you like Jonathan Archer because he was Sam Beckett in Quantum Leap? For me, Captain Benjamin Sisko is the best of the best, but against stiff competition it is going to be a hard case to sell. But in the interest of fairness (and because I feel Picard comes a close second), I’m also going to give me thoughts on what the other four Starfleet captains fared in similar situations.

Are you ready to be convinced? Write about TV and GET PAID. Odo's Biography. "In the beginning ... 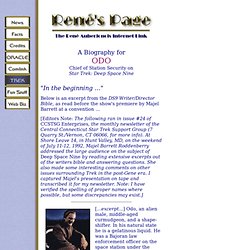 " Below is an excerpt from the DS9 Writer/Director Bible, as read before the show's premiere by Majel Barrett at a convention ... [Editors Note: The following ran in issue #24 of CCSTSG Enterprises, the monthly newsletter of the Central Connecticut Star Trek Support Group (7 Quarry St. /Vernon, CT 06066, for more info). At Shore Leave 14, in Hunt Valley, MD, on the weekend of July 11-12, 1992, Majel Barrett Roddenberry addressed the large audience on the subject of Deep Space Nine by reading extensive excerpts out of the writers bible and answering questions. Star Trek: Deep Space Nine. Star Trek: Deep Space Nine was the third live-action Star Trek series and entered production in 1992. It was broadcast in first-run syndication from January 1993 until June 1999. It was the first Star Trek series created by Rick Berman and Michael Piller rather than by Gene Roddenberry.

It was also the only series to air alongside another Star Trek production throughout its entire run, airing alongside Star Trek: The Next Generation from 1993 until 1994, and then with Star Trek: Voyager from 1995 until 1999. Summary Edit Regarding Gene Roddenberry's involvement, Berman stated, "Michael (Piller) and I discussed it with Gene when we were still in the early stages, but never anything conceptual. " The show is known for its complex characters and storylines, engaging battle scenes and darker (less Utopian) atmosphere. Miles O'Brien and later Worf were two characters imported from TNG. Characters from The Original Series were also re-introduced, including Kor, Kang, Koloth, and Arne Darvin. Edit. Star Trek: Deep Space Nine. Star Trek: 10 Reasons Deep Space Nine Was Cruelly Misjudged. Time has been kind to Deep Space Nine. 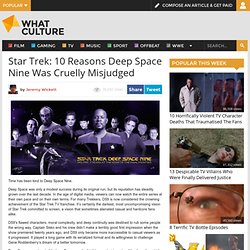 Deep Space was only a modest success during its original run, but its reputation has steadily grown over the last decade. In the age of digital media, viewers can now watch the entire series at their own pace and on their own terms. For many Trekkers, DS9 is now considered the crowning achievement of the Star Trek TV franchise. 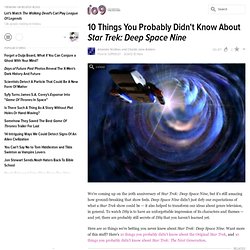 DS9 was probably THE most formative TV show for me, coming at an impressionable time (early-late teens) where I was just starting to explore genre stuff and writing in general. It's been an interesting look back. While a lot about it does hold up pretty well, there are bits that are WAY creaky. Though, interestingly, some of the eps/storylines I (and many internet folks) hated at the time, I actually had an easier time going back to than others remembered more fondly. E.g.: for some inexplicable reason, the Ferengi comedies were more palatable to me now than in the 90s.