Khemorex Klinzhai! Star Fleet Battles. Star Fleet Battles (or SFB) is a tactical ship-to-ship combat game created by the Amarillo Design Bureau and published by the now-defunct Task Force Games beginning in 1979. Amarillo Design Bureau now publishes the game independently. The principal designer is Stephen V. Cole, an engineer and former US Army military intelligence officer. It has undergone heavy revision and expansion since it was originally released and is the oldest and most thoroughly tested Star Trek-based game in existence. While this is a Star Trek product officially licensed by Paramount Pictures, it is granted only a partial license, and as such cannot mention specifics of canon Trek in the games, save for basic information. Star Fleet Battles. Star Fleet Battles is the flagship of the Star Fleet Universe. 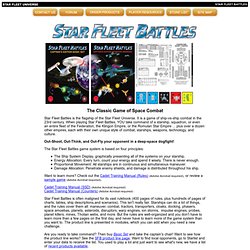 It is a game of ship-vs-ship combat in the 23rd century. When playing Star Fleet Battles, YOU take command of a starship, squadron, or even an entire fleet of the Federation, the Klingon Empire, or the Romulan Star Empire ... plus over a dozen other empires, each with their own unique style of combat, starships, weapons, technology, and culture. Out-Shoot, Out-Think, and Out-Fly your opponent in a deep-space dogfight! 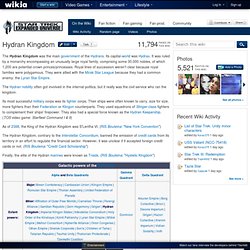 Its capital-world was Hydrax. It was ruled by a monarchy encompassing an unusually large royal family, comprising some 30,000 nobles, of which 1,200 are potential crown princes/princesses. Royal lines of succession weren't clear because royal families were polygamous. Hydran in battle vs Lyran & Klingon. The Coalition turn left Kzinti space in a real mess. 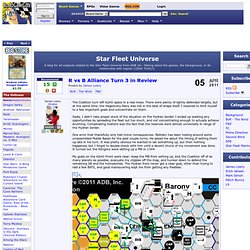 There were plenty of lightly-defended targets, but at the same time, the Hegemony Navy was not in the best of shape itself. I resolved to limit myself to a few important goals and concentrate on them. Sadly, I didn't take proper stock of the situation on the Hydran border. I ended up wasting any opportunities by spreading the fleet out too much, and not concentrating enough to actually achieve anything.

Complicating matters was the fact that the reserves were almost universally in range of the Hydran border. One error that thankfully only had minor consequences: Belirahc has been towing around some unassembled Mobile Bases for the past couple turns. My goals on the Kzinti Front were clear: Keep the MB from setting up, kick the Coalition off of as many planets as possible, evacuate my cripples off the map, and hunker down to defend the remaining SB and the homeworlds.

Activity on the Kzinti front.Activity on the Hydran front. Comments on Hydran Battle. Hydran indiviual hunter. Hydran. The Hydrans are a tripedal civilization who evolved on a planet with a methane-filled atmosphere. 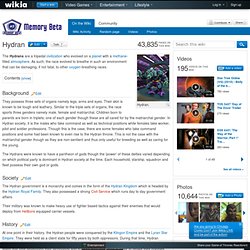 As such, the race evolved to breathe in such an environment that can be damaging, if not fatal, to other oxygen-breathing races. Background Edit They possess three sets of organs namely legs, arms and eyes. Their skin is known to be tough and leathery. The Hydrans were known to have a pantheon of gods though the 'power' of these deities varied depending on which political party is dominant in Hydran society at the time. Society The Hydran government is a monarchy and comes in the form of the Hydran Kingdom which is headed by the Hydran Royal Family.

Their military was known to make heavy use of fighter based tactics against their enemies that would deploy from Hellbore equipped carrier vessels. Hydran - Star Trek Expanded Universe - Fan fiction, RPG, fan films. Biology Edit Hydrans were notable to breathe methane, which could be uncomfortable or lethal for most Federation species. 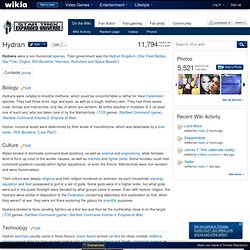 They had three arms, legs and eyes, as well as a tough, leathery skin. They had three sexes: male, female and matriarchal, only two of which are sentient. All births resulted in multiples of 3 (at least one of each sex) who are taken care of by the Matriarchals. Culture Males tended to dominate command-level positions, as well as science and engineering, while females tend to form up most of the worker classes, as well as marines and fighter pilots.