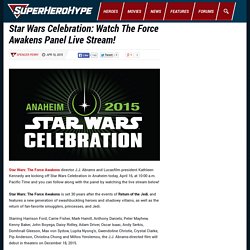 Abrams and Lucasfilm president Kathleen Kennedy are kicking off Star Wars Celebration in Anaheim today, April 16, at 10:00 a.m. Pacific Time and you can follow along with the panel by watching the live stream below! Star Wars: The Force Awakens is set 30 years after the events of Return of the Jedi, and features a new generation of swashbuckling heroes and shadowy villains, as well as the return of fan-favorite smugglers, princesses, and Jedi. Walt Disney Pictures sur Twitter : "Star Wars: The Force Awakens has completed principal photography. #TheForceAwakens #StarWarsVII. Star Wars: Episode VII Cast Announced. 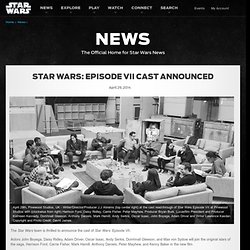 Copyright and Photo Credit: David James. Neill Blomkamp Has An 18-Page Treatment For ‘District 10,’ Turned Down ‘Star Wars’ in Favor of Original Projects. J.J. Abrams on 'Star Wars' Plans: 'Honoring but not Revering' Past. J.J. 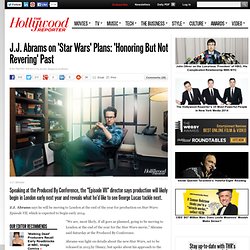 Abrams says he will be moving to London at the end of the year for production on Star Wars: Episode VII, which is expected to begin early 2014. "We are, most likely, if all goes as planned, going to be moving to London at the end of the year for the Star Wars movie," Abrams said Saturday at the Produced By Conference. Abrams was light on details about the new Star Wars, set to be released in 2015 by Disney, but spoke about his approach to the saga. STORY: J.J. Abrams on Film's Future and his Love Hate Relationship With Tech "It is so massive and so important to people," he said. Disney shuts down LucasArts, Star Wars 1313 and. Michel Parbot Empire Strikes Back lost documentary excerpts... Kathleen Kennedy Admits 'Star Wars: Episode VII' May Not Hit in 2015. Photo by de_la_c. Ben de la C: Boom le test du soir #quic...

The Dog Strikes Back: 2012 Volkswagen Game Day Commercial. STAR WARS - IN CINEMAS FEB 9. Star Wars Uncut: Director's Cut. Wampa attacks, blue milk, and incestuous make-out sessions = the Star Wars deleted scenes. STAR WARS - Awesome Collection of Rare Behind the Scenes Photos. As you all know, the Star Wars Saga Blu-ray was released today, and I'm sure many of you are going to be grabbing your copy, if you haven't already. 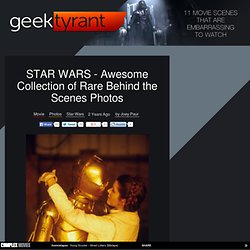 There's still so much from Star Wars that we haven't seen, but this Blu-ray collection will be packed full of behind the scenes goodies, that hardcore fans are sure to enjoy. Here we have an awesome collection of rare behind the scenes photos from the sets of these iconic films. I haven't seen many of these images, and some of them are really fun. There's just something very cool about looking through these candid photos, and seeing the personalities of the actors and crew on the set of this movie. Check out the collection below and tell us what you think! 6 STAR WARS Blu-ray Trailers that might get you Excited for the Release. I know a lot of people who are not excited about the upcoming Blu-ray Star Wars saga. 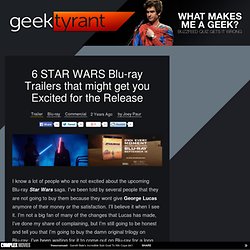 I've been told by several people that they are not going to buy them because they wont give George Lucas anymore of their money or the satisfaction. I'll believe it when I see it. 6 STAR WARS Blu-ray Trailers that might get you Excited for the Release. George Lucas Has 50 Hours Worth of ‘Star Wars’ TV Show. Ethan Miller/Getty Images NEW YORK – George Lucas says 50 hours of scripts have been written for a Star Wars live-action TV show, but is waiting for a technological breakthrough to make shooting financially feasible and get the series on the air, the New York Post reported Tuesday. 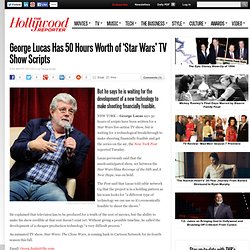 Lucas previously said that the much-anticipated show, set between the Star Wars films Revenge of the Sith and A New Hope, was on hold. The Post said that Lucas told cable network G4 that the project is in a holding pattern as his team looks for "a different type of technology we can use so it's economically feasible to shoot the shows. " He explained that television has to be produced for a tenth of the cost of movies, but the ability to make his show credible at that cost doesn't exist yet.

Without giving a possible timeline, he called the development of a cheaper production technology “a very difficult process.” Star Wars: L´Intégrale de la Saga. News: Lucasfilm Works With Prime Focus To Convert 'Star Wars: Episode I The Phantom Menace' To 3D. "By luck, I stumbled upon your site, and of course I wanted to try it out. 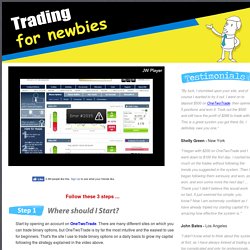 I went on to deposit $500 on OneTwoTrade, then opened 5 positions and won 4. Took out the $500 and still have the profit of $288 to trade with. This is a great system you got there Sir, I definitely owe you one. " Shelly Green - New York "I began with $200 on OneTwoTrade and I went down to $100 the first day. John Bates - Los Angeles "I didn't know what to think about this system at first, as I have always looked at trading as too complicated and only for professionals... obviously I was wrong. Julia Moore - Chicago "Just started trading binary options a month ago.