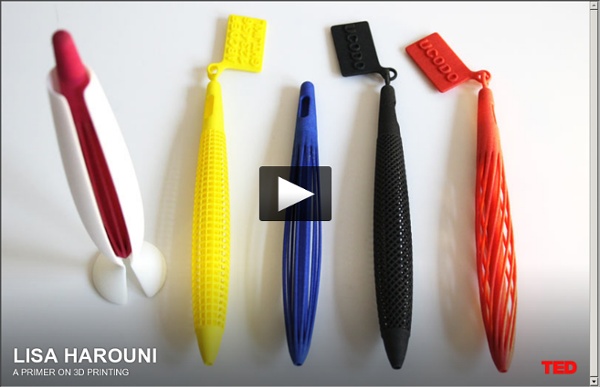 The 10 Best TED Talks of 2011 Watching videos online is usually considered fun, but generally a waste of time. Not so with TED videos, which are uniformly interesting, educational, inspiring, and enjoyable. If you haven't spent much time (or any) checking out TED videos, you should – and to help with that, I've compiled what seem to be the very best 10 TED videos of 2011. It was a grueling task, combing through the cream of the crop on the TED site, but somebody had to do it. Some of the talks may have been filmed prior to 2011 but all of the talks here were posted in 2011.

uld the house of the future look like a spider's web? Out-there architects issue plan for 3D-printed home Concept put together by London-based architecture collective Softkill DesignThey are the latest entrants to the race to put together the first 3D-printable homeComponents would be manufactured off-site then stuck together like velcro By Damien Gayle Published: 18:43 GMT, 14 February 2013 | Updated: 21:56 GMT, 16 February 2013 The house of the future could be built from plastic and look like a spider's web, if one group of conceptual architects have their way. London-based architecture collective Softkill Design have created this concept for the first 3D printed house, and say the first prototype could be built by this summer.

An Invisibility Cloak You Have To See To Believe [Video] It’s official—the invisibility cloak is no longer just another product of childhood fantasy or J. K. Rowling novels. Next-gen cargo ships could use 164-foot sails to lower fuel use by 30% Of the world's nearly 45,000 cargo ships, many burn a low-grade bunker fuel in their engines and produce pollution equivalent to millions of automobiles. To help reduce that toxic load and keep the price of shipping freight reasonable, engineers at the University of Tokyo (UT) and a group of collaborators have designed a system of large, retractable sails measuring 64 feet (20 m) wide by 164 feet (50 m) high, which studies indicate can reduce annual fuel use on ships equipped with them by up to 30%. View all

Futur possible... · People will be fluent in every language. With DARPA and Google racing to perfect instant translation, it won't be long until your cellphone speaks Swahili on your behalf. · Software will predict traffic jams before they occur. Using archived data, roadside sensors, and GPS, IBM has come up with a modeling program that anticipates bumper-to-bumper congestion a full hour before it begins. Will 3D-printed houses stand up as architecture? 'Enter a new architecture' ... 3D-printed house by Janjaap Ruijssenaars. Photograph: Universe Architecture 3D-printing may have been used for a long time in the world of architecture, allowing visionaries to conjure ever more elaborate and unbuildable forms from the ether.

Kinect-like technology turns any surface into a touchscreen Imagine a world where any surface could potentially become a touchscreen for your phone: your hands, clothes, a wall or table. That's the vision behind a new Kinect-like technology called OmniTouch, a wearable system that projects any multi-touch interface onto everyday surfaces, reports New Scientist. Perhaps the most convenient aspect of the technology is how it can be operated on the go, requiring no special calibration for each new surface it is used on. The system adapts easily to surfaces of most textures in 3D space, so it works even when the surface is not flat, such as with your hand, or perhaps a tree trunk. The technology, which is primarily composed of a shoulder-mounted depth camera and a Pico-projector, was developed by researchers at Microsoft and is a vast improvement over previous prototypes that could only work on skin. A user study of the technology showed that dragging performance and touch accuracy approached the sensitivity of conventional touchscreens.

dontDIY's thoughtful Passive house design sees off international competition Passive House Bulgaria recently announced the winner of its international competition to design a low-energy domicile to be built in Lozen, a village very close to Sofia. The winning entry, from Bulgarian outfit dontDIY, is not only eye-catching, but also fully compliant with the rigorous, though voluntary, Passive house standard. View all Buildings that qualify for the accolade of Passive house (it's not limited to residencies) have been described as "ultra-low energy," as they must fall within strict performance criteria per unit area of the building in respect of heating, cooling and energy consumption. This typically results in drastic energy savings when compared to buildings built to meet (though not exceed) national building codes.

3D printed car is strong as steel, half the weight and nearing production Picture an assembly line that isn't made up of robotic arms spewing sparks to weld heavy steel, but a warehouse of plastic-spraying printers producing light, cheap and highly efficient automobiles. If Jim Kor's dream is realised, that's exactly how the next generation of urban runabouts will be produced. His creation is called the Urbee 2 and it could revolutionise parts manufacturing while creating a cottage industry of small-batch automakers intent on challenging the status quo. Urbee's approach to maximum miles per gallon starts with lightweight construction -- something that 3D printing is particularly well suited for.

Watch plastic break, bleed, and heal itself Self-healing materials bring with them the promise of scratched touchscreens that fix themselves, broken circuits that start working again, and even buildings that are able to fill any cracks that appear in their structure unaided. What you may not have realized is in order for these healing processes to happen, those materials end up reacting a lot like our skin and blood does after an injury. The video above demonstrates plastic and foam materials capable of healing themselves.

Radiator Labs transforms radiators into energy-efficient heaters Its idea may be simple, but that did not stop Radiator Labs winning the MIT Clean Energy Prize with its controllable box that can be retrofitted to radiators to boost the efficiency of hot water and steam heating systems. The heavily insulated housings physically cover the radiator, trapping heat in the system, and strictly controlling the amount that is let into the room. This prevents homes becoming over-heated, and wasteful heat loss as people open windows to compensate.