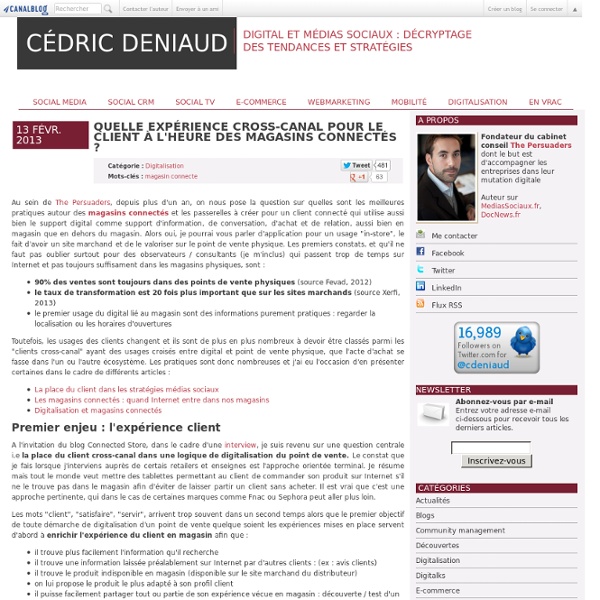 Employer Branding Numbers Everyone Should Know Think you don’t need an employer branding strategy? Read on about a few numbers. The percent of employees, out of 19,000 surveys and exit interviews, who leave an organization for reasons other than money. In that same survey, 89% of employers said they believed that employees left only because of money!

HOW TO: Build Your Brand on Tumblr The Social Media 101 Series is sponsored by Global Strategic Management Institute. GSMI's Social Media Strategies Series are the leading educational events for organizations looking to advance their online capabilities. Learn more. Starting your first business in France? Here are the steps, and some great tips! Starting a business in France is an adventure. Ever heard the horror stories of Italian bureaucracy? Well – France has it too! When you go through this adventure you will encounter stamp-fetishism, physical paper obsessions, snooty bank employees, and stamp-wielding government employees.

What to Expect from Social Media Advertising in 2013 Social media advertising has really taken off in 2012, but what does the future hold? Here’s what I’m expecting to see in 2013. Having had its IPO earlier this year, Facebook’s attention in 2012 has been firmly on how to make money from the huge amount of data it holds about its one billion members. It’s not exactly going out on a limb to suggest this will be their main concern going into 2013 too. However, I think there will be some significant changes to how it’s done.

Secrets of Employer Branding Leaders: Unilever Is your company considered a great place to work? Pay attention, because it can make all the difference in your quest to recruit the right people for your organization. Our latest research proves that a strong employer brand attracts and retains top talent, reducing both recruiting costs and attrition rates. But how exactly does a company build such a brand? This is the first in a series of interviews we conducted with customers who are attracting interest on LinkedIn for all the right reasons. Unilever is near the top of the list, so we sat down with Paul Maxin, Global Resourcing Director, who has been with the company since 2006 and has 25 years of experience working both with agencies and in-house.

Achieving Statistical Significance with AdSense A/B-Testing · Denis Grosz Most publishers are aware that testing different templates against each other is one of the easiest ways to increase AdSense revenue. Knowing when you have actually stumbled on a winning template, however, is surprisingly complex. Some publishers are tempted pull out their statistics textbooks and start performing the calculations to determine the thresholds for various confidence levels. They start graphing the curves that illustrate the requisite margins-of-victory of one template over another.

Responsive Navigation: Optimizing for Touch Across Devices As more diverse devices embrace touch as a primary input method, it may be time to revisit navigation standards on the Web. How can a navigation menu be designed to work across a wide range of touch screen sizes? In these demos, Jason Weaver and I decided to find out. How to Use SlideShare to Generate Leads Do you want more leads? Have you looked into SlideShare? This article will give you 10 tips to maximize your leads with SlideShare. Why SlideShare? The rise of visual content marketing is forcing marketers everywhere to re-evaluate their overall strategy. Now you can measure and benchmark your talent brand with LinkedIn’s Talent Brand Index At LinkedIn, we love the expression “if you can’t measure it, you can’t manage it,” and we run our business accordingly. But not everything that’s important is easily measurable. Building a strong talent brand is now a strategic priority for most forward-thinking companies. 70% of employers on LinkedIn say it’s a top priority, but only 33% actually measure the strength of their talent brand. Today we aim to change that with the launch of LinkedIn’s Talent Brand Index, a simple metric allowing you to measure, benchmark and ultimately elevate your talent brand.

How Marketing Will Change In 2013: The Strategic Forecast In Part One of our 2013 marketing forecast, we asked a number of high-level creative types for their educated predictions on how their jobs and the marketing landscape would change in 2013. Now, we’re passing the mic to the strategists. These are the people who are said to represent the consumer in the marketing process--they’re the masters of research, the experts in media and culture that are responsible for generating brand insights and opportunities. As they’re steeped in knowledge of consumer behavior, we wanted to add their big-picture perspective to our look at what the near future of advertising may hold.

5 Companies That Are Rocking Social Media [Infographic] These days more and more companies and brands are turning to social media to promote themselves, but some of these companies stand out from the crowd. Voltier Digital has put together an infographic that lists 5 Companies That Are Rocking Social Media. Read on and check out the infographic below to find out more. HubPages CEO On Google's Panda: SEO Doesn't Work Posted by Tom Foremski - August 24, 2011 I met with Paul Edmondson, CEO of HubPages, and Jason Menayan Director of Marketing to talk about how the publishing site is dealing with the aftermath of Google's major update to its algorithm, Panda, released earlier this year. Panda has caused huge problems for publishers because it cut off massive amounts of traffic in a bid to force publishers to produce higher quality content. There have been four versions of Panda released since late February. Each new version of Panda has impacted traffic to large content sites.