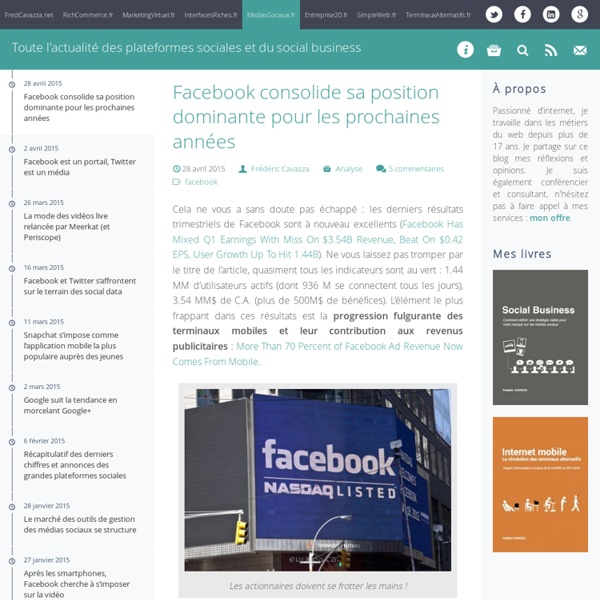 Essential SEO Considerations For A New Website [DOs & DON'Ts] So you are in the process of designing and developing a website and you want to adhere to the best SEO practices (good idea). There is a plethora of good SEO tips and guides on the web to get your brain juices flowing, but we have compiled these essential 5 SEO DOs and DON’Ts to keep in mind when designing and developing a new website. If you want your website to show up in the search engines (like Google, Yahoo, and Bing), you have to make sure you’re following the 5 tips below. Remember, "80% of success is showing up" (Woody Allen).

Ads with Friends: Analyzing the Benefits of Social Ads As social networks have picked up a greater share of digital ad dollars, a key differentiator they emphasize to brand advertisers is the ability to harness the power of friend recommendations when it comes to sharing experiences and content. Last week, Facebook introduced new advertising products that highlight friend connections on the site to make marketing more inherently social. Though social ads were previously available on Facebook, last week’s announcement signifies even greater emphasis on this unique form of advertising. But do these types of social ads offer any advantages over their non-social counterparts? To answer this question, Nielsen analyzed* results from 79 Facebook campaigns over a period of six months to determine how well ads with social messages succeeded at breaking through to the audience.

Is Google Making Us Stupid? - Nicholas Carr Illustration by Guy Billout "Dave, stop. Stop, will you? Stop, Dave. Will you stop, Dave?” So the supercomputer HAL pleads with the implacable astronaut Dave Bowman in a famous and weirdly poignant scene toward the end of Stanley Kubrick’s 2001: A Space Odyssey. Fortnite hosted a Diplo concert in its new party mode Fortnite’s new no-guns “party royale” mode just launched on Wednesday, and the new map played host to its first live concert Friday evening. DJ and producer Diplo performed a live Major Lazer set, and actor and performer Jordan Fisher also made appearances before and after the show. The concert was held at the big, music festival-like main stage on the east side of the island. Because there are no weapons in the new mode, attendees didn’t have to worry about defending themselves, which, for me, made it easier to just enjoy the show. If you missed the event on Friday, there’s an in-game rebroadcast scheduled for Saturday at 10AM ET, according to Epic Games.

An update to Google Social Search Today we’re doing a little bit more to bring you all the goodness of Google, plus the opinions of the people you care about. As always, we want to help you find the most relevant answers among the billions of interconnected pages on the web. But relevance isn’t just about pages—it’s also about relationships.