How Planes Fly. Modern aircraft manufacturers don't have much on Orville and Wilbur. 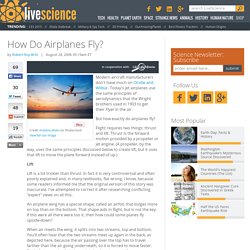 Today's jet airplanes use the same principles of aerodynamics that the Wright brothers used in 1903 to get their Flyer in the air. But how exactly do airplanes fly? Flight requires two things: thrust and lift. Study Reveals Physics of How Cats Drink. Cats are better physicists than dogs, according to a new study — at least when it comes to drinking. 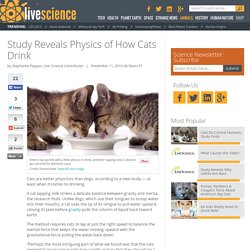 A cat lapping milk strikes a delicate balance between gravity and inertia, the research finds. What's the Total Energy In the Universe? Considering the amount of energy packed in the nucleus of a single uranium atom, or the energy that has been continuously radiating from the sun for billions of years, or the fact that there are 10^80 particles in the observable universe, it seems that the total energy in the universe must be an inconceivably vast quantity. 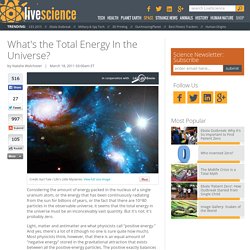 But it's not; it's probably zero. Light, matter and antimatter are what physicists call "positive energy. " The Physics of Figure Skating. To see physics in action in everyday life, look no further than figure skating. 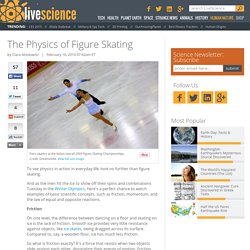 And as the men hit the ice to show off their spins and combinations Tuesday in the Winter Olympics, here's a perfect chance to watch examples of basic scientific concepts, such as friction, momentum, and the law of equal and opposite reactions. Friction On one level, the difference between dancing on a floor and skating on ice is the lack of friction. Smooth ice provides very little resistance against objects, like ice skates, being dragged across its surface. Compared to, say, a wooden floor, ice has much less friction. So what is friction exactly? The general low level of friction on ice allows a skater to glide along the surface smoothly without friction stopping the motion as soon as it's begun. 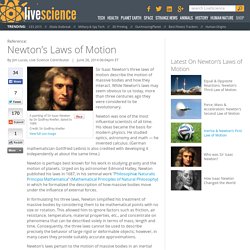 While Newton’s laws may seem obvious to us today, more than three centuries ago they were considered to be revolutionary. Newton was one of the most influential scientists of all time. His ideas became the basis for modern physics. He studied optics, astronomy and math — he invented calculus. (German mathematician Gottfried Leibniz is also credited with developing it independently at about the same time.) Newton is perhaps best known for his work in studying gravity and the motion of planets. In formulating his three laws, Newton simplified his treatment of massive bodies by considering them to be mathematical points with no size or rotation.

Newton’s laws pertain to the motion of massive bodies in an inertial reference frame, sometimes called a Newtonian reference frame, although Newton himself never described such a reference frame. Further reading: What Is Kinetic Energy? Kinetic energy is the energy of mass in motion. 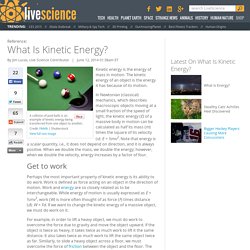 The kinetic energy of an object is the energy it has because of its motion. In Newtonian (classical) mechanics, which describes macroscopic objects moving at a small fraction of the speed of light, the kinetic energy (E) of a massive body in motion can be calculated as half its mass (m) times the square of its velocity (v): E = ½mv2. Note that energy is a scalar quantity, i.e., it does not depend on direction, and it is always positive.

When we double the mass, we double the energy; however, when we double the velocity, energy increases by a factor of four. Get to work Perhaps the most important property of kinetic energy is its ability to do work. Friction Definition. Friction is what causes fire to start when you rub two sticks together, as these warriors from a Masai tribe in Kenya are doing.Credit: Paul Banton / Shutterstock.com Friction is the resistance to motion of one object moving relative to another. 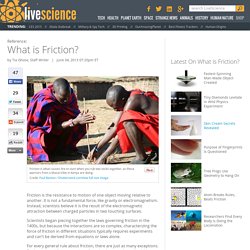 It is not a fundamental force, like gravity or electromagnetism. Instead, scientists believe it is the result of the electromagnetic attraction between charged particles in two touching surfaces. Scientists began piecing together the laws governing friction in the 1400s, but because the interactions are so complex, characterizing the force of friction in different situations typically requires experiments and can't be derived from equations or laws alone. For every general rule about friction, there are just as many exceptions. Types of friction. What Is Classical Mechanics? Secret to Penguin Locomotion Revealed. Penguins are wobbly on land, but their extreme underwater agility involves the perfection of a twisting wing motion that is just now coming to be understood. 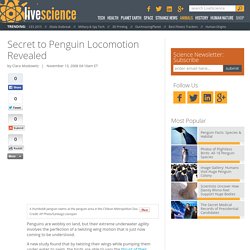 A new study found that by twisting their wings while pumping them under water to swim, the birds are able to vary the thrust of their flapping and increase control over their movements. The Physics of Daredevil's Amazing Supersonic Skydive. An Austrian daredevil is gearing up to make the world's highest skydive on Monday (Oct. 8), a high-flying leap from 23 miles above Earth that promises to break more than one record if all goes according to plan. 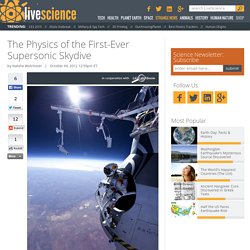 Veteran skydiver Felix Baumgartner, 43, will make the jump, thereby becoming the first person ever to freefall faster than the speed of sound. His skydive will also be the highest ever, superceding a record set in 1960 by U.S. Air Force Captain Joe Kittinger by more than 3 miles (5 kilometers). Accelerometers: What They Are & How They Work. When you use a compass app on your smartphone, it somehow knows which direction the phone is pointing. 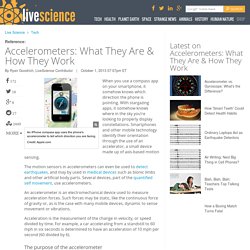 With stargazing apps, it somehow knows where in the sky you’re looking to properly display constellations. Smartphones and other mobile technology identify their orientation through the use of an accelerator, a small device made up of axis-based motion sensing. The motion sensors in accelerometers can even be used to detect earthquakes, and may by used in medical devices such as bionic limbs and other artificial body parts. Several devices, part of the quantified self movement, use accelerometers. An accelerometer is an electromechanical device used to measure acceleration forces. Could a Penny Dropped Off a Skyscraper Actually Kill You? City-slickers: Have you ever worried that, at any moment, you could be struck dead by a penny flung off the roof of a nearby skyscraper? You can rest easy — on that score, at least. Fun Science Experiments. Daniel Bernoulli (1700-1782) was a Swiss mathematician and physicist best known for his work involving fluid dynamics. He began studying fluids because he was interested in studying the pressure and flow of blood in the human body.

His painful method of measuring blood pressure involved inserting a hollow glass tube directly into a patient’s artery and measuring the height of the blood pumped into the tube with each beat of the heart. Thankfully, this method of measuring blood pressure was replaced by the less-painful blood pressure cuff invented by Scipione Riva-Rocci in 1896. When a fluid is moving faster, it has lower pressure. This principle explains the lift created by an airplane’s wing.Credit: NASA Quest. From his experiments, Bernoulli concluded that when a fluid is moving faster, it has lower pressure. Experiment 1 A fluid stream that comes in contact with a gently curved surface will tend to follow that surface. Run a gentle stream of water from a faucet. Experiment 2. How Cheetahs Outpace Greyhounds. Cheetahs and greyhounds have very similar running styles, but somehow the big cats leave their doggy rivals in the dust. Their secret: Cheetahs "switch gears" while running, striding more frequently at higher speeds, new research finds.

Greyhounds, on the other hand, seem to take the same number of strides per second at every speed. Cheetahs have been recorded running at up to 65 mph (105 kilometers per hour) — much faster than a greyhound, which, as the fastest canid (doglike animal), is known to reach 43 mph (68 kph). [10 Things You Didn't Know About Dogs] "Cheetahs and greyhounds are known to use a rotary gallop, and physically they are remarkably similar, yet there is this bewitching difference in maximum speed of almost a factor of 2," study researcher Alan Wilson, from the Royal Veterinary College in the United Kingdom, said in a statement.

Running wild. The Cool Physics of 7 Classic Toys. By Natalie Wolchover | December 01, 2011 02:34pm ET Compared with the allure of video games, the classic toys of yore may seem boring to today's kids. But in fact, they aren't quite as mundane as they seem: Many of these toys embody important physical concepts, and playing with them helps children develop an intuitive understanding of the world around them something that cannot be gleaned from the virtual worlds of modern gaming. To learn the underlying physics of your favorite classic toys, read on. Author Bio Natalie Wolchover Natalie Wolchover was a staff writer for Live Science from 2010 to 2012. The Twisted Physics of 5 Olympic Sports. Get a Death Grip! Why Snakes Don't Slip When Climbing Trees. Some snakes seem to be little scaredy-cats, as new research finds when climbing trees, they hold on for dear life. The study researchers found snakes use a much greater force to grip tree trunks and other surfaces they're climbing than is necessary.

The finding suggests the reptiles prefer to play it safe rather than conserve energy, researchers say. Compared with moving horizontally on flat land, climbing up a vertical or inclined surface is difficult for animals. Matter: Definition & the Five States of Matter. Physical science, which includes chemistry and physics, is usually thought of as the study of the nature and properties of matter and energy in non-living systems.