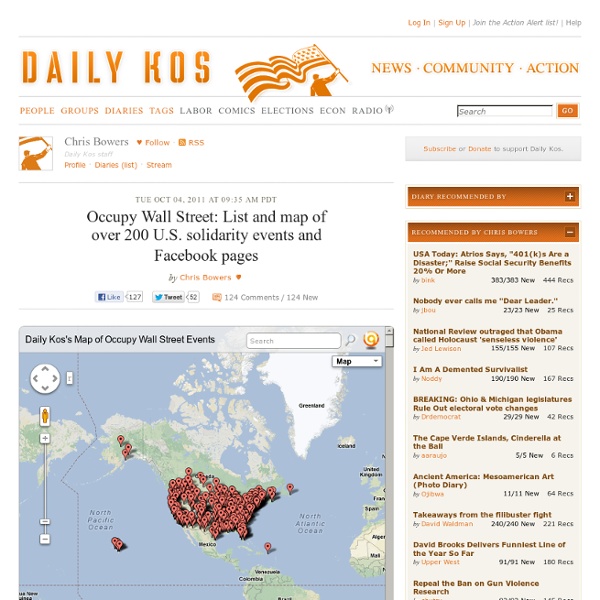 More Tagging tips: A tag is a way to search for this diary. If someone is searching for "Barack Obama," is this a diary they'd be trying to find? Use a person's full name, without any title. Senator Obama may become President Obama, and Michelle Obama might run for office. If your diary covers an election or elected official, use election tags, which are generally the state abbreviation followed by the office. Tags do not compound: that is, "education reform" is a completely different tag from "education".

Dreaming Big: The Occupy Movement and The Media There is a kind of hysteria brewing in Canadian media these days. The Occupy movement has been going on for three weeks in Toronto, for several months in New York, and it's driving some conservative Canadian media pundits -- like Andrew Coyne of Maclean's magazine -- crazy. In a recent article, he declares that the Occupy movement is a "phony class war." He quotes statistics on dishwashers and microwaves, proudly declaring that 90 per cent of Canadian homes have the ability to nuke their food. Writes Nick Fillmore of Vancouver Observer: "Nowhere in the article does Coyne address many of the key issues Canadian Occupy supporters are angry about, such as the cost of student education, a lack of employment for young people, a real unemployment rate of some 13 per cent, high household debt, a lack of savings, and the undermining of our pension system." But it's always interesting to compare different national media.

Map: Occupy Wall Street Spreads Nationwide (Updated) The loose-knit protest movement known as Occupy Wall Street has stirred action from New York City to LA and spread overseas. Here we present an expanding map of protest hot spots and reported arrests, and track the movement's growth. Check back often for updates—and check out all the rest of MoJo's #OWS coverage here. Protests taking place beyond Manhattan: What began as a call for Americans to gather in New York's Financial District has given rise to like-minded actions nationwide and far beyond.

US protests spread to 1,000 cities US protests spread to 1,000 cities Sun Oct 9, 2011 7:7AM Widening US protest rallies against the prevalence of top-level corruption, poverty, and social inequality in America, which began two weeks ago in New York, have now spread to more than 1,000 cities across the country, Press TV reports. Protest superstars such as Green Party leader and former presidential candidate Ralph Nader have boosted protester enthusiasm. Occupy Wall Street: Children of the 1% out for a good time at the protests Teens from Bard and Parsons show their solidarity in NYChicago protesters heckle financial industry eventsDozens are arrested, including girl, 14, in first Des Moines protestWall St demonstrators plan march today on millionaires' mansions100 arrested as police clash with protesters in BostonMan falls to his death from car park near San Diego protestersObama senior adviser says President is on demonstrators' side By Paul Bentley and Micaela Mclucas Updated: 16:23 GMT, 11 October 2011 They have branded themselves the 99 per cent, camping out in New York's financial district to protest against corporate greed and financial inequality.

#N17 Global Day Of Action! Sixty days into the struggle #OccupyWallStreet was violently evicted by the NYPD, who leveled our homes at Liberty Square to the ground. Our movement, however, is stronger than it has ever been. In these sixty days we have brought about a massive awakening, perhaps the largest one in the country since the Civil Rights Movement fifty years ago, and certainly the first global one in modern history. People around the world, from Spain to Australia, from Chile to the U.S. have opened their eyes together to the decadence and injustice of the common system that exploits us.

YourLIVE! º Always There Sign up | Login Welcome Map Feed Details Download Help About Blog name Occupy Wall Street The joyous freedom of possibility. Dissent can be personal, collective, creative — whatever you want it to be. Revolt can be physical or spectral, a blackspot on a corporate logo or a digital mindbomb posted online. How Israel’s Tent Cities Influenced Occupy Wall Street « Green Prophet - a sustainable voice for the Middle East Inspired by the Arab Spring this past summer, Israelis from a rainbow of different ethnicities, political leanings and backgrounds banded together to form a protest movement unlike any in recent history. Their tent cities influenced the Occupy Movement in the world. As the Arab spring spawned protests by the disenchanted across the Middle East, Israelis took to the streets and boulevards across Israel to express their disenchantment with social issues and the high cost of living. They did this in a very simple yet effective fashion. Many left their homes (in some cases they didn’t have homes) to occupy major thoroughfares across Israel by pitching tents and camping out. Social Media, the mainstream media and word of mouth were the primary promoters of the movement that inspired Israelis to take action.

map: Thousands of students prepare to 'Occupy' colleges LOS ANGELES (RNN) - College students across the country are preparing for Thursday's national day of protests in unity with the Occupy Wall Street movement. As of Wednesday evening, 90 colleges were confirmed for Occupy College's "National Student Solidarity Protest," according to the group's website. Natalia Abrams, a spokeswoman and facilitator for the group, expects the number to surpass 100. This will be the second protest of the fledgling group, which sponsored a walk-out on college campuses Oct. 5. Thursday's protests are planned for 4:30 p.m.

Occupy movement Tunes This site is provided as a research and reference tool. Although we make every reasonable effort to ensure that the information and data provided at this site are useful, accurate, and current, we cannot guarantee that the information and data provided here will be error-free. By using this site, you assume all responsibility for and risk arising from your use of and reliance upon the contents of this site. This site and the information available through it do not, and are not intended to constitute legal advice. Social Media Maps Provide Global View of Occupy Wall Street One month after the first protesters showed up on Wall Street, similar movements have popped up in cities throughout the world — and many more are being planned or discussed. As "Occupy Wall Street" evolves into "Occupy Everywhere," several new services are mapping the social media chatter surrounding them. Similar to the dashboards news outlets like Al Jazeera and independent projects like IAmJan25 and HyperCities created to track social media surrounding the Arab Spring, Occupy Wall Street maps now show where relevant geotaged tweets, YouTube videos and Flickr images are being posted, in real time. "I don't really have a strong political opinion," says Humphrey Flowerdew, who started mapping Occupy Wall Street tweets on Cravify.com.

Occupy protests around the world: full list visualised "951 cities in 82 countries" has become the standard definition of the scale of the Occupy protests around the world this weekend, following on from the Occupy Wall Street and Madrid demonstrations that have shaped public debate in the past month. We wanted to list exactly where protests have taken place as part of the Occupy movement - and see exactly what is happening where around the globe. With your help, adding events in our form below, we've been able to show 750 Occupy events world wide. As we wrote this week: