Deep Time : A History of the Earth - Interactive Infographic 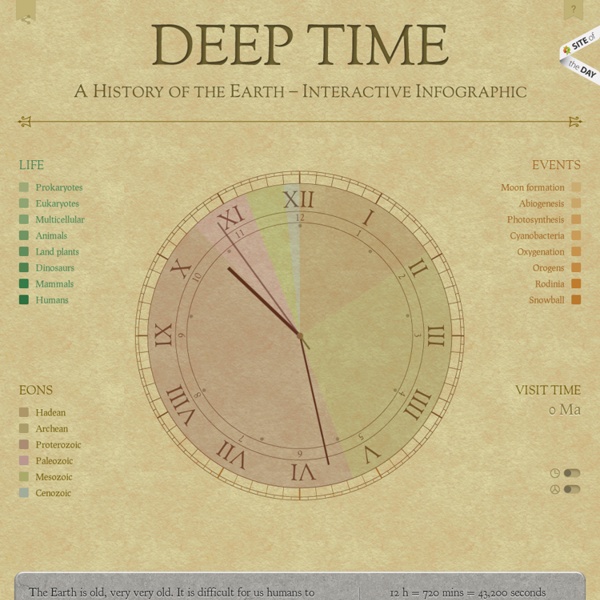 Life on the planet started astonishingly early. The first living organisms, in the current model of evolution, are thought to be Prokaryotes1. The oldest known fossilised prokaryotes have been dated to approximately 3.5 billion years ago, only 1 billion years after the formation of the Earth's crust. Eukaryotes2 are more advanced organisms with complex cell structures, each of which contains a nucleus. Although incredibly hard to determine their origin, they are thought to have developed 1.6–2.1 billion years ago, although some research2 suggests eukaryotes being present even earlier than this. Around 1.1 billion years ago multicellular3 organisms are thought to have started to develop, most likely similar in form to plants such as green algae. 200 million years later true multicellularity had also evolved in animals similar in nature to today's sponges, which are organisms which can reassemble themselves. The genus Homo gave rise to modern humans8, Homo sapiens, us.

Mother nature network These bizarre locations may seem like a series of elaborate movie sets, but they are real destinations that you might want to see for yourself. Photo: Greg Mote/Flickr The Wave, Arizona, U.S. Photo: Shutterstock Travertines, Pamukkale, Turkey Top 20 World Most Beautiful Living Spaces 03 Mar 2013 March 3, 2013 If you are browsing internet for Home Ideas, Decoration and Remodeling Tips you are on the right place. In today’s article we collected the top 20 most beautiful living spaces around the world. I am sure you will hate your apartment after checking out the images bellow. Starting from Switzerland, across America and up to Australia, there’s no better interior designs that the ones we collected and attached in the gallery bellow.

Myrmedrome - A real ant colony simulator MYRMEDROME is an ant colony simulator which tries to imitate the ants’ life as well as possible without introducing artificial effects. The simulation is based on the fundamental principle that each ant is not enough intelligent to understand it lives in a complex community, nor it is able to organize tasks in its colony. Therefore, each ant lives and works following some simple rules interacting (unaware of it) with the others by chemical signals. These thousands of connections rise a self-organization of the whole colony, which leads an observer to believe that someone imposed some kind of strategy. This Someone is named... Evolution. Earth - Why you should mostly trust what science tells you Science writer and astrophysicist Adam Becker explains how science really works to BBC Earth's Michael Marshall and Melissa Hogenboom, with help from the animators at Pomona Pictures.

MEME : Gratuitous Grace Aldous and I would give a (LSD) session to a friend or someone who wanted and the preparation for a session was very very careful. The day before we didnt do anything we just fixed the house very quietly, the day of the session there was nothing except that and even the day after; so there was a three day thing because as Aldous wrote in Island the session is a gratuitous grace. Its what you take away from there. A gratuitous grace, something thats given to you for nothing, not that you merit it you just are lucky and get it but what you do with it afterwards is what counts. Laura Archera Huxley 'Liberation,' Dr Robert began again, 'the ending of sorrow, ceasing to be what you ignorantly think you are and becoming what you are in fact.

Animal Adaptations Being able to adapt is a matter of life or death. Animals who can't adapt - die! For animals, adaptation is the idea that animals have developed features that help them to survive and thrive where they live. How to Build a Universe That Doesn't Fall Apart Two Days Later First, before I begin to bore you with the usual sort of things science fiction writers say in speeches, let me bring you official greetings from Disneyland. I consider myself a spokesperson for Disneyland because I live just a few miles from it—and, as if that were not enough, I once had the honor of being interviewed there by Paris TV. For several weeks after the interview, I was really ill and confined to bed. I think it was the whirling teacups that did it. Elizabeth Antebi, who was the producer of the film, wanted to have me whirling around in one of the giant teacups while discussing the rise of fascism with Norman Spinrad... an old friend of mine who writes excellent science fiction. We also discussed Watergate, but we did that on the deck of Captain Hook's pirate ship.

Classification Why do we classify things? * Classification provides scientists and students a way to sort and group organisms for easier study. * There are millions of organisms on the earth! (approximately 1.5 million have been already named) Organisms are classified by their: * physical structure (how they look) * evolutionary relationships * embryonic similarities (embryos) * genetic similarities (DNA) * biochemical similarities All living things carry out the life functions. There are many different types of organisms. In Denmark, a printable house (Credit: Eentileen’s Print a House project) Danish architects Frederik Agdrup and Nicholas Bjorndal of Eentileen used just a computer, a “printer” — actually, a computer numerical control (CNC) machine — and 820 sheets of plywood to build a 125 square meter (1,345 square foot) home in four weeks. Named Villa Asserbo, the home is the pilot project of Eentileen’s Print a House project. The designers are touting the process of mass-customizing houses and responsibly producing them on site.

Animal Adaptations (4/12) Wow! Every year my third graders do amazing work on their animal adaptation projects. Here are the animal adaptation power points that were just completed by my third graders this year. Our goal was to combine what we have learned about habitats, landforms, nonfiction reading and research to put these projects together. Be prepared to learn a lot about animals and how they adapt to their environments: Owls

MRI Technician Schools: 350+ Online MRI Tech Programs Whether you are a Zen Buddhist or just want to lead a Zen life, these 50 spiritual and simplifying blogs and community web sites will point you down the path of enlightenment. Explore the first sub-section to learn how to have a happy, fulfilled life through Zen-inspired lessons and mantras. The second sub-section is dedicated to those who are seeking a more spiritual side of Zen like Zen Buddhism. Many of these blogs feature meditations and insight on the path to Enlightenment. Learn to Live Peacefully Blogs 1. zenhabits – This no-frills site focuses on ways of slowing down and enjoying life to its fullest. 2. Arctic Plants As of July 1, 2013 ThinkQuest has been discontinued. We would like to thank everyone for being a part of the ThinkQuest global community: Students - For your limitless creativity and innovation, which inspires us all.