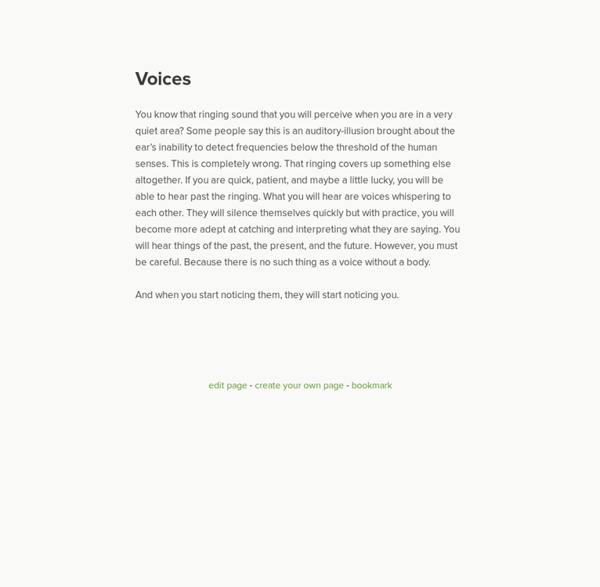 You know that ringing sound that you will perceive when you are in a very quiet area? Some people say this is an auditory-illusion brought about the ear’s inability to detect frequencies below the threshold of the human senses. This is completely wrong. That ringing covers up something else altogether. If you are quick, patient, and maybe a little lucky, you will be able to hear past the ringing. What you will hear are voices whispering to each other.

The Egg The Egg By: Andy Weir You were on your way home when you died. It was a car accident. 100 Very Cool Facts About The Human Body The Brain The human brain is the most complex and least understood part of the human anatomy. There may be a lot we don’t know, but here are a few interesting facts that we’ve got covered. Nerve impulses to and from the brain travel as fast as 170 miles per hour. Ever wonder how you can react so fast to things around you or why that stubbed toe hurts right away? Excerpts from "How to be Perfect" by Ron Padgett Wednesday May 30, 2012 Listen Download E-mail Share Excerpts from "How to be Perfect" Paper weaving By Kate on June 29, 2011 I really liked the woven gift-topper I made a few weeks ago and thought it looked really pixely! Just perfect for space invaders…

20 Tree House Pictures: Play-Club Plans to Big-Kid Houses Treehouses are more popular than ever, as play spaces for children but also as luxury hotel (and even house) designs for adults. Some of the most fantastic plans and ideas can be traced to specialist designers and builders – and pictures of their work can provide some of the best inspiration (as well as an informal visual guide) for do-it-yourself recreational, residential and commercial tree buildings. Blue Forest is one such company, but far from the only one.

10 Creepy Mysteries You Haven't Heard Of Mysteries We have had numerous mystery lists in the past, but, due to a recent question I asked on the Listverse fanpage on facebook, I decided to put together a new one. This list covers mysteries that are, hopefully, not well known to most of you (but including one previously published item with updated information), and ones that have something creepy about them. I hope you enjoy the list and be sure to mention other creepy mysteries in the comments. In 1930, aged 4, Shanti Deva from Delhi, India, told her parents that she had once lived in a place called Muttra (now known as Mathura), that she had been a mother of three, who died in childbirth, and that her previous name was Ludgi. Because the girl continually related the story, her parents investigated.

Carved Book Landscapes by Guy Laramee (click images for detail) For the better part of three decades multidisciplinary artist Guy Laramee has worked as a stage writer, director, composer, a fabricator of musical instruments, a singer, sculptor, painter and writer. Among his sculptural works are two incredible series of carved book landscapes and structures entitled Biblios and The Great Wall, where the dense pages of old books are excavated to reveal serene mountains, plateaus, and ancient structures. Of these works he says: On Long Distance Relationships And Temporary Insanity If Venus had a telephone, I would leave cranky messages. If Aphrodite had email I would flame her. And if Cupid, god damn him, had a mailbox, I would stuff postcards with letter bombs attached in it.

Adult/teenage Craft By Kate on March 11, 2014 Hello! Last year I made some ‘origami bunny’ chocolate bar wrappers and I thought the bunny would look nice on these treat boxes. The design is really minimal and suitable for kids and grown-ups. If you want to make a real origami bunny then check out this post at howaboutorange. Are you making anything for Easter? How To Actually Win A Fist Fight Ok, well, with the response from yesterday's post, I felt compelled to go ahead and do this. Without further ado: You know it has to be said, first sentence, first paragraph: the best way to win a fist fight is not to get into one in the first place. No shit, sherlock. Every single mens magazine who has ever attempted to publish an article like this has started (and ended) exactly that way and is usually devoid of any real information - sometimes because someone on the editorial staff wanted to avoid putting the periodical at risk for a lawsuit; other times because the author has absolutely no clue what they’re talking about, so they cop out with this “Verbal Judo Wins The Day!”

10 More Enigmas That Defy Explanation Mysteries What is it about the bizarre and mysterious that piques our curiosity? It entertains our sense of wonder and excites our imagination, for sure. Luckily for us, history is marked with strange, logic-defying occurrences to amuse us. Here is a list comprised of 10 more unexplainable and interesting phenomenon and incidents that we crave so much. This list is made up of a mixture of two submissions to the Christmas competition which shared some items, so it seemed a good idea to combine the two to give us ten things never before shown on the site.