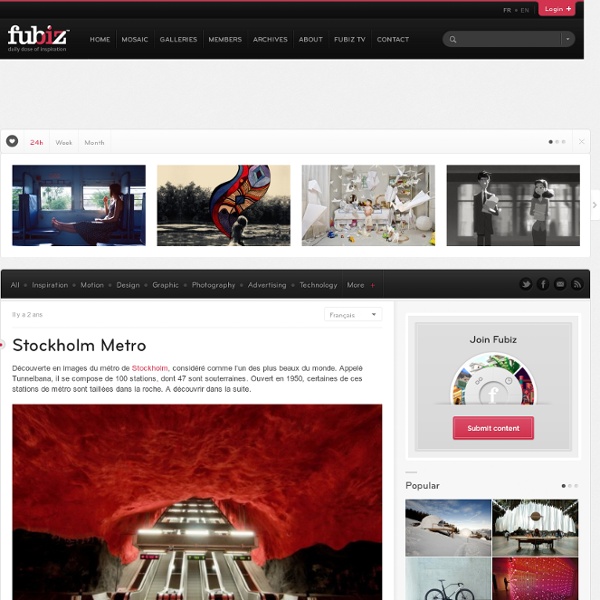 Street Art Current Issue On sale now at newsstands or on screen May 2014 - Issue #160 All year long, Juxtapoz is celebrating its 20th Anniversary by showcasing the pivotal figures in contemporary art over the past two decades. Some artists are blue chip, some are underground heroes, others are behind-the-scenes legends. Old Garage turned Mini Dream Home! Hello there! It’s been a busy week with a trip to Seattle for the Picasso exhibition and a drive out to the coast but I knew I had to share this amazing remodel with you before the week came to a close. Everyone loves good makeovers and the ones involving tiny spaces, creative design and ingenious solutions are my all time favorites! Check out how Seattle artist, designer and welder, Michelle de la Vega, created this beautiful little 250 sq. ft. haven…

106 of the most beloved Street Art Photos – Year 2010 More info. More info. More Banksy on Street Art Utopia. More info. Miami Beach Parking Garage by Zaha Hadid Zaha Hadid has become the latest in a string of architects to design a car park for Miami Beach. The car park was commissioned following the popularity of other completed Miami garages by architects including Frank Gehry, Enrique Norton and Herzog & de Meuron, whose concrete and glass structure was featured on Dezeen last year. The spiralling structure will be located in the Collins Park area in the northeast of South Beach. Anyone interested in car park design can see a few more here.

A former Cement Factory is now the workspace and residence of Ricardo Bofill Image Courtesy of Ricardo Bofill Architect: Ricardo BofillProgram: Architectural offices /archives /model laboratory /exhibition space /Bofill's-apartment /guest rooms /gardensLocation: Barcelona, SpainTotal floor area: 3,100 square meters and gardensHouse area: 500 square metersDate Completed: 1975 There is nothing as good as an aged bottle of wine; and in this case the aged bottle of wine is a project which was completed in 1975, but is still worth mentioning! First and foremost we would like to thank our friend and founder of Room Service design store in Greece, Katerina Xynogala for providing us with the necessary information regarding The Cement Factory, which is featured in the latest Room Service catalogue. The Cement Factory was discovered in 1973, it was an abandoned cement factory and partially in ruins, comprised of over 30 silos, underground galleries and huge engine rooms; Ricardo Bofill bought it and began renovation works. sources:

Jean Simmons and Marlon BrandoDeborah Ke Ingrid Bergman Jean Simmons and Marlon Brando Deborah Kerr Clark Gable, Cary Grant, Bob Hope and David Niven Why Skateboarding Matters to Architecture Every June 21st since 2003, Go Skateboarding Day has rallied skateboarders around the globe – in skateparks and public plazas, downtown nooks and parking lots – to grind, ollie, and kickflip it with the best of them. If I didn’t lose you at “ollie,” you’re probably wondering: what the heck does this have to do with architecture? Well, I could talk about the architectural challenge that a skate park, as an interactive public space with specific topological requisites and social implications, offers architects. I could show you some cool testaments to the fact, such as the Architecture for Humanity-sponsored projects in Afghanistan and Manhattan, opening today.

9X9 Experimental House / Studio Archiholic Architects: Studio Archiholic Location: Gyeonggi-do, South Korea Architect In Charge: Younghan Chung Design Team: Boram Kim Area: 93 sqm Year: 2013 Photographs: Kim Jaekyeong Structural Engineer : Tisec Eng Construction: Seungwhan Ryu From the architect. Long ago, in his Building, Dwelling, Thinking; Martin Heidegger used a few buildings to discuss their relationships with dwelling. “These buildings house man. He inhabits them and yet does not dwell in them, when to dwell means merely that we take shelter in them.

Skelewags - Urban Art (by @baekdal) #design Written by Thomas Baekdal | Thursday, August 30, 2007 This cartoon concept by "Chewie" is great - mixing real world environments with cartoon characters. The style with skull like cartoon figures are not that special, but the overall style is. "Chewie" has been very quiet about what this project is really about. I guess we will just have to wait and see. NESTREST Doesn't that picture look so peaceful and inviting? I think I'm in love. That dangling, serene little pod is a NESTREST, designed by Paris' Daniel Pouzet and Fred Frety. It's described as an over-sized bird's nest that's perfect for relaxation, meditation and open-air conversations. Awesome Conceptual Photography Awesome Conceptual Photograph - Conceptual photography as a part of conceptual art is a photography genre in which the artist makes a photograph of a concept or idea. Usually the conception of the idea precedes the realization of the photography. This kind of photography often involves use of computer editing to achieve the desired effects , but many artists work without the computer. They “ put in place ” the things and the beings that will be the subject of the final photograph , and the placement of those things and beings “build” the concept, the idea, and the final outcome.