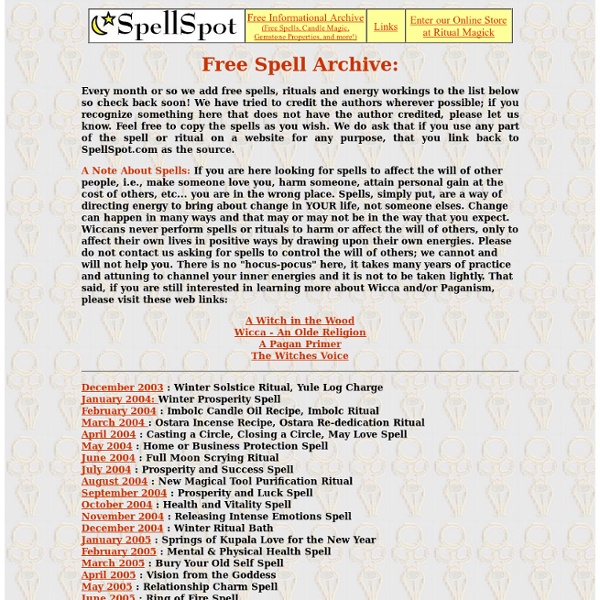 Free Spell Archive: Every month or so we add free spells, rituals and energy workings to the list below so check back soon! We have tried to credit the authors wherever possible; if you recognize something here that does not have the author credited, please let us know. Feel free to copy the spells as you wish. We do ask that if you use any part of the spell or ritual on a website for any purpose, that you link back to SpellSpot.com as the source. A Note About Spells: If you are here looking for spells to affect the will of other people, i.e., make someone love you, harm someone, attain personal gain at the cost of others, etc... you are in the wrong place. A Witch in the Wood Wicca - An Olde Religion A Pagan Primer The Witches Voice December 2003 : ( back to top ) Winter Solstice Spell - Perform on the night of Winter Solstice Gather your supplies: Small Amount of Hollyberry Oil Small Amount of Mistletoe Herb Clean, small piece of white paper (parchment if you have it) Red Candle

Goddess: Prayers, Invocations, Songs, Mantras, Chants, Rituals Quotations Links Bibliography Months and Seasons Tantra Cloud Hands Blog Shakti Devi of Tantra Nature Spirits One Old Druid's Final Journey Nature Spirituality Rituals Quotations Speaking to the Goddess:Prayers, Invocations, Songs, Mantras, Chants, Rituals Casting a Circle The Purposes of a Circle A sacred circle has several purposes, the most significant of which is to define an area where formal ritual work can be performed. A circle is a place in which the rules and conditions are different to that of the everyday world. A circle is not a barrier, but a doorway to another world. To contain any magickal energy raised and to prevent its dissipation until it has been used up is another purpose of the circle.

witch By Doreen Valiente Hear now the words of the witches, The secrets we hid in the night, When dark was our destiny’s pathway, That now we bring forth into the light. Mysterious water and fire, The earth and the wide-ranging air. By hidden quintessence we know them, And will and keep silent and dare. The birth and rebirth of all nature, The passing of winter and spring, We share with the life universal, Rejoice in the magickal ring. Behind the Spells: Magic Aura / Kobold Press December 16, 2008 / Bret Boyd Behind the Spells: Magic Aura is the second in a series of releases produced for Kobold Quarterly by Tricky Owlbear Publishing, Inc. For those unfamiliar with the series, “Behind the Spells” provides a historical background, secret effects, and related material to one of the classic spells of the world’s most famous fantasy roleplaying game.

Chants, Blessings, Prayers and Charms A Spell to Cast Away Darkness Belisama Fire 2001 In the center of the darkest storm, The Sabbats of Wicca Learn Wicca / Wicca 101 / Faerie Tradition Because witches honor nature, they have eight festivals, or Sabbats, that mark the year as it turns through its seasons. The following is basic information about these Sabbats, and includes both standard Wiccan information as well as my personal Sabbat lore and experiences, in other words, what I perceive the Sabbats to be. Freemasonry Freemasonry is a fraternal organisation that traces its origins to the local fraternities of stonemasons, which from the end of the fourteenth century regulated the qualifications of masons and their interaction with authorities and clients. The degrees of freemasonry, its gradal system, retain the three grades of medieval craft guilds, those of Apprentice, journeyman or fellow (now called Fellowcraft), and Master Mason. These are the degrees offered by craft, or blue lodge Freemasonry. There are additional degrees, which vary with locality and jurisdiction, and are now administered by different bodies than the craft degrees. The basic, local organisational unit of Freemasonry is the lodge. The lodges are usually supervised and governed at the regional level (usually coterminous with either a state, province, or national border) by a Grand Lodge or Grand Orient.

The meaning of the blank rune The Blank Rune Also called Wyrd Letter: none Old Norse name: none Flower: purple iris Gem: opal (see below) Number: unknown period of time As I mentioned in the introduction to this section, the use of the Blank Rune in a rune set is the subject of much debate. It is said, and I am willing to agree, that ancient rune masters did not use the Blank Rune.