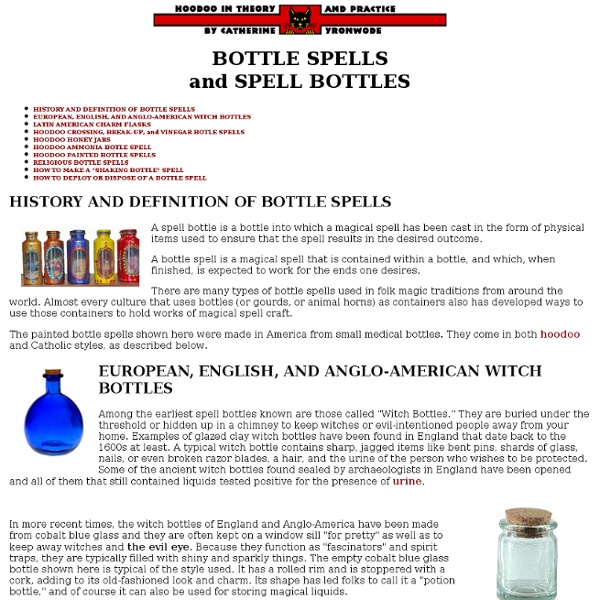 A spell bottle is a bottle into which a magical spell has been cast in the form of physical items used to ensure that the spell results in the desired outcome. A bottle spell is a magical spell that is contained within a bottle, and which, when finished, is expected to work for the ends one desires. There are many types of bottle spells used in folk magic traditions from around the world. Almost every culture that uses bottles (or gourds, or animal horns) as containers also has developed ways to use those containers to hold works of magical spell craft. The painted bottle spells shown here were made in America from small medical bottles. They come in both hoodoo and Catholic styles, as described below. Among the earliest spell bottles known are those called "Witch Bottles." In more recent times, the witch bottles of England and Anglo-America have been made from cobalt blue glass and they are often kept on a window sill "for pretty" as well as to keep away witches and the evil eye. Related:  Wiccan/Pagan • Wicca

The Informed Pagan | promoting responsibility and integrity within the pagan community, through knowledge and awareness. Dispelling Myths About Wicca and Paganism There are many misconceptions out there about Pagans and Paganism as well as Wicca and Wiccans. For some reason all of these words have negative connotations for many and are often associated with evil, particularly by Christians and Christianity. People do not seem to understand what it means to be Wiccan or Pagan. Perhaps by dispelling the myths we can begin to build tolerance and peace between faiths. Wicca is the same thing as Paganism. Wicca is one of the oldest religions. Wicca is witchcraft. Wiccans worship nature. Pagans are all polytheistic. Wiccans and Pagans are Satanic and evil. Wiccans and Pagans believe in human and animal sacrifice. Wiccans are all vegetarian. Pagans all share the same opinion on political issues and morality. Wicca comes from the word wicked. Wiccans all worship nude or dressed in black. Pagans perform sexual rituals involving orgies and the deflowering of virgins. The pentagram and pentacle, a five-pointed star in a circle, are evil symbols of Satan.

Blessed Litha!!!!!!!! Mystickal Realms Wishes all Members, Staff and Friends who celebrate the Sabbats A Blessed and Happy Litha! History of Litha (MidSummer) Also known as Summer Solstice, Litha, Alban Hefin, Sun Blessing, Gathering Day, Feill-Sheathain, Whit Sunday, Whitsuntide, Vestalia, Thing-tide, St. John's Day In addition to the four great festivals of the Pagan Celtic year, there are four lesser holidays as well: the two solstices, and the two equinoxes. In folklore, these are referred to as the four 'quarter-days' of the year, and modern Witches call them the four 'Lesser Sabbats', or the four 'Low Holidays'. Litha is usually celebrated on June 21st, but varies somewhat from the 20th to the 23rd, dependant upon the Earth's rotation around the Sun. Humanity has been celebrating Litha and the triumph of light since ancient times. Those who celebrated Litha did so wearing garlands or crowns of flowers, and of course, their millinery always included the yellow blossoms of St. Correspondences

Herbs & Herbal Uses Herbs in medicine, cooking, and magic. Find charts, planting tips, and other uses for these valuable plants below. Imagine....awakening in the morning and stepping outside to a lush and fragrant paradise....which exists to satisfy your own culinary, medicinal, and even spiritual needs..... Welcome to Herb Gardening! What is an herb? The loose definition of herb is any plant that is used for its culinary, medicinal, or fragrant properties. Please do explore the links to the left for a comprehensive index of herbs and their uses, and the links below for some creative ways to use them in your own life. Culinary Chart Common Foods and Complementary Herbs Making Gourmet Herbal Vinegars Making Gourmet Herbal Oils & Butters In gardening, herbs are an important part of what is known as "Companion Planting." Companion Planting As always with gardening, esthetics are extremely important. List of Annual Herbs List of Biennial Herbs List of Perennial Herbs Landscaping with Herbs Print Your Own Seed Packets

Neopaganism, Paganism, Neo-Paganism Google + Neo-Paganism (also spelled Neopaganism and also known as Paganism) is a religion that emphasizes ancient pagan religious traditions and reverence for nature. This religion takes a variety of forms known as "paths," which range from Wicca, which focuses on spells and goddess worship, to Hellenic Polytheism, which seeks to revive Greek paganism in an academically accurate form. While this belief system was more commonplace in the ancient world, it has experienced a resurrgence in parts of the modern world, mostly in the West. (See Wicca) When it comes to Neo Paganism and Wicca, many people have questions like: What do Wiccans believe in God or gods? The table of contents below will direct you to various topics on Neo Paganism and Wicca, from their beliefs to comparison charts to their holidays and more.

What is Wicca, Witchcraft and Paganism? The article below describes how Wicca draws from the Old Traditions of Witchcraft. While this is true, we would simply like to clarify that Witchcraft and Wicca, while simular in many respects, are not the same. One can be a Witch, without being a Wiccan, just as a person can be a Christian, without being a Baptist. Wicca is a recognized religion, while Witchcraft itself is not considered a religion. Thus, Wicca might best be described as a modern religion, based on ancient Witchcraft traditions. Contrary to what those who choose to persecute or lie about us wish to believe, Wicca is a very peaceful, harmonious and balanced way of life which promotes oneness with the divine and all which exists. Wicca is a deep appreciation and awe in watching the sunrise or sunset, the forest in the light of a glowing moon, a meadow enchanted by the first light of day. For the past several hundred years, the image of the Witch has been mistakenly associated with evil, heathenism, and unrighteousness.

Spells - Purification Spell to break a curse - Breaking a Hex or Curse This is a "heavy-duty" purification spell. On the night after the full moon and just before bed, light 13 candles, preferably white. Fill the tub up with hot water (as hot as you can stand to sit in). Add 1 cup sea salt, 1 tablespoon sage, 1 tablespoon lavender and 1 tablespoon chamomile. Turn off the water and let the bath steep in the herbs. What was done was done Be it now undone By the light of the full moon's wane Cleanse my soul of taint and stain Let now my hurtful spell reverse And lift from me this vicious curse As I enter now this sacred space Return my spirit to it's grace Enter the bath and let the water cleanse away the effects of the curse. Accept my apologies for what was done Disperse my spell with the morning's sun Remain in the bath until the water cools. Free Spells

The White Goddess - Pagan Portal Shekinah - Wicca Wicca is a religion that has roots going back to the dawn of man. The late Dr. Margaret Murry traced Witchcraft's origins to Paleolithic times, 25,000 years ago. Because the first humans depended so much on the animals and plants around them for life, animism developed to be what was the first known religion. Animism is ascribing to each natural phenomena a spirit to reside over it. Wicca is a joyous religion springing from our kinship with nature. Wicca is a spiritual path originating in Britain which recognizes both a feminine and masculine element to the divine. Aside from the Wiccan Rede and the "three-fold law", Wiccans do not have to subscribe to a fixed ideology so beliefs vary, however the common theme is that Wiccans gain a connection with the divine spirit of mother nature through the celebration of her cycles through the Wicca calender. According to most versions of the three-fold law, whatever one does comes back to one thrice-multiplied, in amplified repercussion. Runes