Magical Wood Properties and the Magical Properties of Wood by DragonOak 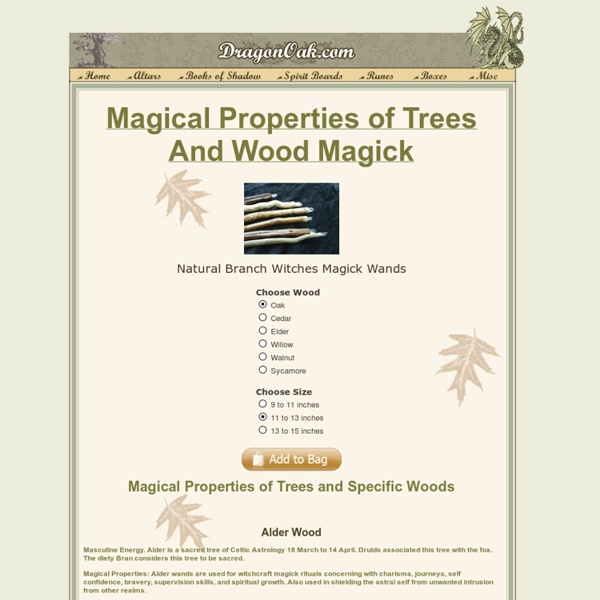 Feminine energy. Elder is a sacred tree of Celtic Astrology 25 November to 23 December. The Elder is also said to be the tree used in the crucifixion of Christ. Associated with the Celt Goddess Cailleach Beara and the Raven. Some have considered this tree to be unlucky due to its association with the crucifixion, or it may one of those nasty rumors started by the church in order to combat belief systems outside their on scope of a limited belief system. Magical Properties: Elder wands are most often used in Faerie Magic, banishment, magical arts, protection from evil, imagination, change, and healing. Feminine energy. Magical Properties: Use of the Elm wands is strong in magic used concerning endurance, fertility, horticulture, passage thru death and phases of life, rebirth, and invocation of the Goddess. by DragonOak| Masculine energy. by DragonOak| Feminine energy. Magical Properties: Artistic ability, magical knowledge, and optimism are provided by the enchanting use of Hazel.

Chants, Blessings, Prayers and Charms A Spell to Cast Away Darkness Belisama Fire 2001 In the center of the darkest storm, Is a brilliant rainbow, bright and warm. Look past the darkness that you see, There's more than what you think might be. There now is freedom, so you can find, The path to stimulate your mind. So don't despair, let hope shine bright, The sun will rise, just past the night. A Spell for Healing May the light that shines from deep inside, Flow ever out, and never hide. May the shining light within my soul, Heal me now, and make me whole. May the light that shines so very bright, Help heal ________, on this night. May the shining light within my core, Bring peace and love, forever more. A Happy Positive Day Now close your eyes and visualize the day you want to have, image who is there, what you are wearing, the place, surroundings, the atmosphere, what the weather is like and other things that you would like to happen. Hold this image for as long as you can, then repeat the following 3 times: "God and Goddess hear my plea,

Earth Mysteries: Stonehenge and the Druids, Salisbury Plain, Wiltshire - Earth Mysteries Stonehenge and the Druids, Salisbury Plain, Wiltshire After centuries of neglect in the wake of first Roman and then Christian suppression, the Druids were rediscovered during the Renaissance when the revival of interest in ancient Greek and Latin writers brought attention to the works of Pliny, Tacitus, and Julius Caesar and their descriptions of the Celtic world. First in France in the sixteenth century, and then in England, the ancient Celts (or Gauls as they were known in France) and Druids were claimed as historical ancestors. By the seventeenth century, a new romantic image of Druids began to emerge in French and English literature. In England as early as 1624 the Celtic warrior queen Boudicca is credited by Edmond Bolton with building Stonehenge as her monument. Druids celebrating the summer solstice at Stonehenge Winston Churchill (center) hosts the Ancient Order of Druids at Blenheim Palace on 15 August, 1908

Witchy Thoughts: Fluffy Bunnies? A new trend within the Pagan and Wiccan communities - especially on the Internet - is to bash so-called "fluffy bunnies", typically in the most rude and offensive terms possible. "Fluffy bunnies" are usually defined as those who fit one of the following criteria: - they persist in believing inaccurate information about Wicca; - they focus on the "light" side of Wicca to the exclusion of the "dark" side; - they push their beliefs on others and/or claim persecution constantly; - they practice in an ostentatious, pretentious manner (such as calling oneself "Lord"/ "Lady" or wearing eighteen pentacles at once), usually because they are into Wicca for the shock value. I agree with many of the criticisms voiced by these folks - for example, dissemination of inacurate information, a "victim" mentality, and pretentiousness are problems in our community. 1. 3. 4. Now, far be it from me to promote a victim mentality. 5. Shock tactics do get attention.

Dream Moods A-Z Dream Dictionary Symbols are the language of dreams. A symbol can invoke a feeling or an idea and often has a much more profound and deeper meaning than any one word can convey. At the same time, these symbols can leave you confused and wondering what that dream was all about. Acquiring the ability to interpret your dreams is a powerful tool. In analyzing your dreams, you can learn about your deep secrets and hidden feelings. Remember that no one is a better expert at interpreting your dreams than yourself. To guide you with your dreams interpretations, we have interpreted over 5900 keywords and symbols and over 20,000 different meanings in our ever expanding dream dictionary. Every detail, even the most minute element in your dream is important and must be considered when analyzing your dreams.

Witchcraft World - Witchcraft Spells Wiccan Spells Spells are used in witchcraft to channel the power of the Wiccan God and Goddess to initiate positive change and for resolution of problems. It is important to know what phase the moon is in while practicing spells and witchcraft. For example, it is best to do spells of a banishing or destructive nature in the waning of the moon, when it is dark and the new moon is about to wane. Constructive spells Spells of a constructive nature should be performed during the waxing of the moon, when the moon is full and bright. Spells Resources Purchase your Simple Spell Casting E-Kit today! Click Here! Consecration/Purification in Spells Consecration is defined by the dictionary as to “dedicate formally to a religious or divine purpose.” Three Red Leaves Spell This spell is used to protect the mind against things such as nightmares, negative thoughts and “invasions of evil”. Then extinguish the candle, and wrap the leaves in a white cloth or pouch.

title goes here Obsidian I apologise if the title of this essay may be a little misleading. I am not making a direct observation of morons in the Craft; in fact, some of the examples I mention below may even be anything more substantial than broad generalizations. The Obsidian Mirror has existed now for just about forty-five weeks. As you may already know, A.J. and his retinue have declared war on $ilver Ravenwolf. I used to think that Ravenwolf was a complete fucking moron. However, there are many who want to be like her. Another celebrity idiot I'd like to point out and make fun of is Fiona Horne, Australian whore d'oeuvres, whom after failing miserably at being a Gwen Stefani clone musician got into Playboy (and has hence tried to silence anyone who publishes any of her nude photos), and has actually become mildly successful at being a Neopagan author. Now that I'm done bitching about people, I'm going to get to the actual message of this essay. It's a way to control you. Back to the Main Page

Beth's Pagan Stuff Welcome to my pagan home on the Web! This page includes my own resources (marked with a * ) as well as links to other people's resources.About Paganism & Witchcraft:Witchy Thoughts:Music and Fun:Gods/ Goddesses/ Deity/ the Divine:*Virtual Altar to Hekate*My thoughts on Pagans and Theology*My Queer Pagan Page - young but growing...*Is Biology Destiny? Today's Moon Phase (Thanks to the U.S. Questions, comments, suggestions, etc. You're welcome to link to my site if you like. Beth's Pagan Stuff: Online since 1997 Beth's World of Wonders