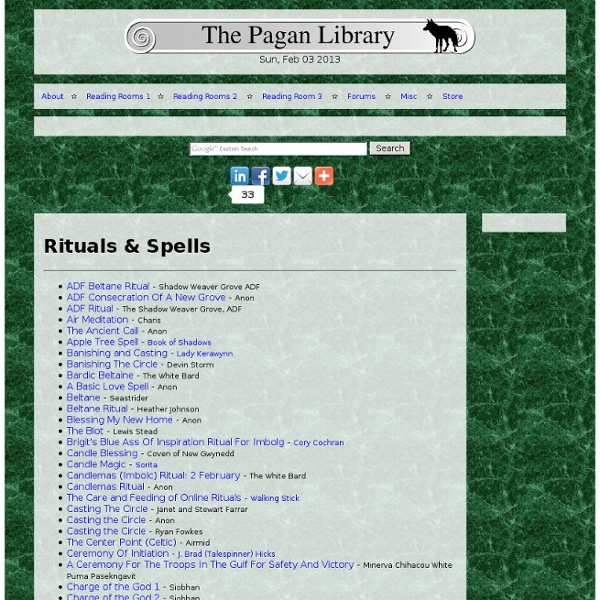 How To Read the Runes How to Read the Runes There are as many different ways to read the runes as there are ways to cast and read any divinatory system. Any of the books you can get on the market will provide you with several different ways to read runes, including complicated, multirune castings. But here we'll start with three easy castings that will allow you to begin working the stones immediately and getting used to their energies and how they operate. First, a word about casting methods. It's not necessary to come up with a huge elaborate ritual that includes casting a circle, calling quarters, invoking deity, etc., every time you want to do a reading. Seeing the Light © By Gary Vey Seeing the light. Until quite recently, I thought that the term "enlightenment" was a metaphor. But I met an individual who suggested that the word accurately describes the sensation when one remembers that they are something other than their human body.

Tarot Birth Cards Over the next year I am going to be writing about Tarot Birth Cards, what they mean and how we can work with them. I use the system of Tarot Birth Cards developed by Ruth Ann and Wald Amberstone of the Tarot School (www.tarotschool.com). Using the Seeker’s birth data (month, day and year), pairs of birth cards are defined. (For more information, and to calculate your own Birth Cards, go to Please note: I have a book being published by Schiffer Books in fall of 2011 – , “Keys To Empowerment”, incorporating images from Karyn’s Easton’s “Tarot Lovers Tarot”. This was to have been a joint project (book and deck published together), but the decision was made to publish both separately, which I find very exciting!

Brigid's Cross At Imbolg, the Maiden aspect of the Goddess might be represented in a great variety of ways -- by a simple ear of dried corn, a figure made of grain at Lughnasadh, or straws or wheat braided into an intricate design. One representation of the Goddess is Brigid's Cross. Although the original design may well have been made from rushes, wheat versions have been recreated for centuries. Birthday Numerology How to Use Birthday Numerology I have included this brief guide on birthday numerology for the purpose of better understanding how numbers are symbols, and how these symbols play a part in our lives. As mentioned on the Spiritual Meaning of Numbers page, every number has a certain power that expresses it's connection to the universe. Numbers have relationships with all things in nature, thus making them supremely powerful symbolic expressions. By reducing an important date (such as our birthday) into one number, we can then refer to the symbolism of that number and then gain knowledge about various aspects of ourselves and our lives. Birthday numerology is used to reduce your birth date to a vibratory number by adding the day of the month, the number of the month and all the number that make up the year in the date you are wanting a number symbol for.

Wiccan History Anon Wicca is a relatively modern attempt (approximately 50 years old) at reviving and reconstructing the old pre-Christian religions of Europe. In a mythopoetic sense it is many centuries old. However, the Witch of 200 years ago would not recognize what is called "witchcraft" today. Science of the Heart - Head-Heart Interactions Traditionally, the study of communication pathways between the "head" and heart has been approached from a rather one-sided perspective, with scientists focusing primarily on the heart’s responses to the brain’s commands. However, we have now learned that communication between the heart and brain is actually a dynamic, ongoing, two-way dialogue, with each organ continuously influencing the other’s function. Research has shown that the heart communicates to the brain in four major ways: neurologically (through the transmission of nerve impulses), biochemically (via hormones and neurotransmitters), biophysically (through pressure waves) and energetically (through electromagnetic field interactions). Communication along all these conduits significantly affects the brain’s activity.

Astrology Insights Current Transits As the planets of our solar system orbit around the Sun, they move into mathematical relationships with one another. These relationships are called "transits." Transits operate like a pen highlighting words on a page - they draw our attention to a particular area. Hold an Imbolc Candle Ritual (for Solitaries) Hundreds of years ago, when our ancestors relied upon the sun as their only source of light, the end of winter was met with much celebration. Although it is still cold in February, often the sun shines brightly above us, and the skies are often crisp and clear. As a festival of light, Imbolc came to be called Candlemas. On this evening, when the sun has set once more, call it back by lighting the seven candles of this ritual. ** Note: although this ceremony is written for one, it can easily be adapted for a small group. First, set up your altar in a way that makes you happy, and brings to mind the themes of Imbolc.

The Key of Hell: An Enlightenment Sorcery Manual Cyprianus was, by all accounts, a shady character. In her book Remedies and Rituals: Folk Medicine in Norway and the New Land, Kathleen Stokker writes that medieval Scandinavians spun tales of a Dane named Cyprianus who was so evil that Satan cast him out of hell: "This act so enraged Cyprianus that he dedicated himself to writing the nine Books of the Black Arts that underlie all subsequent Scandinavian black books.” Bizarrely, another tradition maintained that the true Cyprianus was “a ravishingly beautiful, irrestistibly seductive, prodigiously knowledgeable, pious Mexican nun.” And yet another tradition traces the name back to St. Cyprian of Antioch, a powerful Greek wizard who was famed as a demon-summoner before converting to Christianity.

Wiccan Spells That Work! 4.9 out of 5 based on 29 user reviews. (Click on a Spell to see its reviews) The power of Wicca is in the very earth beneath your feet. The vital forces of nature are ever present, and can be used to great positive effect in your life. The life force of the world cannot be resisted.