9 crowdfunding websites to help you change the world. 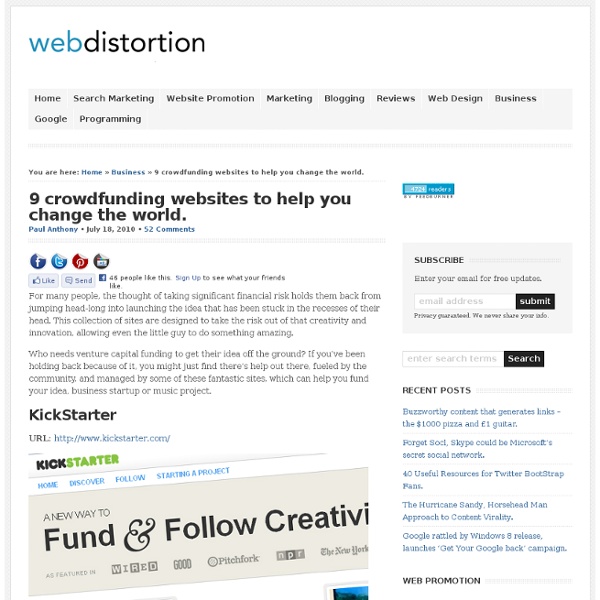 For many people, the thought of taking significant financial risk holds them back from jumping head-long into launching the idea that has been stuck in the recesses of their head. This collection of sites are designed to take the risk out of that creativity and innovation, allowing even the little guy to do something amazing. Who needs venture capital funding to get their idea off the ground? If you’ve been holding back because of it, you might just find there’s help out there, fueled by the community, and managed by some of these fantastic sites, which can help you fund your idea, business startup or music project. KickStarter URL: KickStarter has received quite a bit of publicity recently for its efforts. As far as the rules for funding goes, KickStarter keeps things simple. RocketHub URL: Another very similar site to KickStarter is RocketHub. Edit. Quirky URL: Quirky offers product designers and inventors a shot at getting their product to market. Fundbreak URL: CatWalkGenius URL: URL: IndieGoGo

Reasons why the social graph deserves to die If you’ve ever gotten a little creeped out by the way social networks have invaded our lives, then you aren’t alone. There are a lot of people who enjoy using the social web, but struggle with it too. Unfortunately, most of the rhetoric about this part of the web is still pretty uncomplicated, broadly split between those who gleefully champion the new openness and those who deride it as meaningless or destructive. That leaves many of us who have more complicated feelings stranded in the middle. Good news, then, for this silent majority: perhaps we have a new manifesto in The Social Graph is Neither.

Overtone - Beyond Social Media Monitoring Scalable to growth. Adaptable to change. Leveraging SOA and your existing technology The KANA Enterprise platform leverages your existing technology investments by integrating with your enterprise data, applications and messaging systems. The platform is built on service-oriented architecture standards and designed for effective customer experience management. Qu'est-ce que Yoyomolo ?  - Yoyomolo YoyomoloTM What? Based on the ODE platform, used in the past decade by many important foundations, YoyomoloTM is a web and mobile service allowing people, groups and even organizations to initiate and participate in fundraising activities.

KissKissBankBank Social Media Monitoring and Analysis with SM2 from Techrigy (Alterian SM2) Do you know the process your customers take to buy and connect with you? Their journey is often filled with many steps, stops and starts. What you do to help them along the way makes all the difference in gaining a competitive foothold. New Montreal initiative “CrowdFund Night” wraps up successfully Montreal, Monday 3rd Dec 2012 – Last Monday, November 26th 2012, SeedingFactory held the first community event dedicated entirely to crowdfunding called “CrowdFund Night”. The event was held at The Notman House, known as the home of the web in Montreal, and brought together more than 60 entrepreneurs, artists and curious guests for an evening of discovery and education on the art of crowdfunding. “Crowdfunding can be used by anyone and everyone to kickstart a project, and that’s what we want to communicate with this event”, says SeedingFactory co-founder Heri Ratotomalala. “It’s a practice that funds thousands of projects across the world, and we want to make sure that the Montreal community is not missing out” adds other co-founder Bruno Rakotozafy. Some of the comments received were: “It was a great opportunity to network with passionate people and hear about their projects, all the while learning the ins and outs of crowdfunding.

48 Free Social Media Monitoring Tools Go to the updated version of this post:54 Free Social Media Monitoring Tools [Update 2012] If you want to know what’s happening in the social web you need monitoring tools. Before you get out your credit card and start to spend money try out some of the free social media monitoring services. This way you get a taste of what is available and if you need paid services. I have collected 48 free social media monitoring tools. In the Group A are the services that I use regularly or seem interesting to check out immediately.