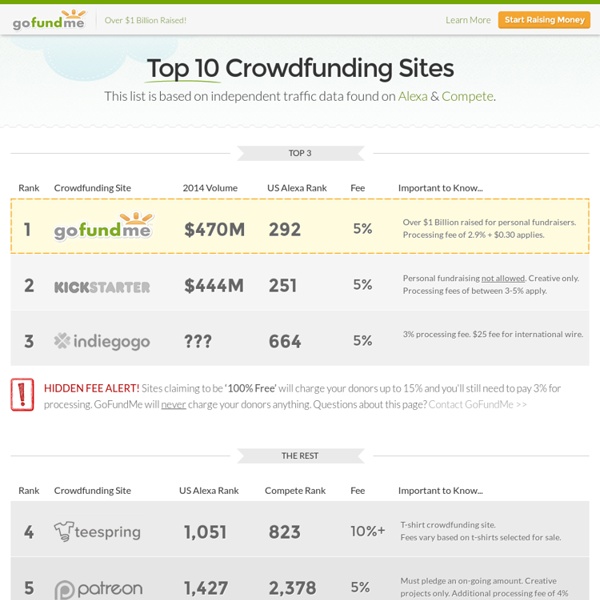 Top 50 Open Source Companies: Where Are They Now? glasses When The VAR Guy launched his website in January 2008, our resident blogger kept a super close eye on open source channel partner programs. At one point, The VAR Guy published the Open Source 50 -- tracking how the top open source companies were working with VARs and IT service providers. So whatever happened to each of the 50 companies in that annual list? Common Misconceptions about Crowdfunding Understanding how crowdfunding works is key to running or backing successful crowdfunding campaigns. In many cases in life, what you don't know (or understand) can hurt you and crowdfunding is no different. So, rid yourself of your misconceptions and get ready to run a powerful -- and successful -- crowdfunding campaign. Misconception #1: Ease of crowdfunding = easy money This first misconception people have of crowdfunding is probably the most dangerous.

The Gust Blog - Thoughts on startups by investors who fund them & entrepreneurs who run them. The two sites you mentioned are both secondary listing services, for later stage companies. For a new angel investor, by far the best thing to do is to join a local angel investor group that belongs to the Angel Capital Association. There are hundreds of them, with at least one in every state. Major metropolitan areas typically have more than one. Some groups specialize, investing primarily in life sciences or tech companies or women-led ventures or other areas. Some are wide open, investing in everything from real estate to films.

Is Social Media Driving the Economy? - Richard Florida - Technology Social media is redefining the landscape of everything we do from the way we connect to family and friends, how brands and celebrities capture attention, to the way business and journalism function. Hundreds of millions of people across the world use social networks like Facebook, Twitter, and LinkedIn. If any technology promised to shatter the constraint of geography, overcome distance, and flatten the world, social media would be it. But a quick look at the map below, from the NetProspex 2010 Social Business Report, shows this is not the case at all, certainly not for the United States. The map shows the 50 leading social media cities in the United States.

Picking a Title for Your Crowdfunding Campaign Updated April 26, 2015. Running a successful crowdfunding campaign takes a certain amount of planning, skill, and well, luck. For those interested, please check out my expert guide to running a successful crowdfunding campaign to see how experts recommend approaching crowdfunding to win. But taking a step back, I thought it could be instructive to look at the finer parts of the crowdfunding process...like picking a title for your campaign. Angel Resource Institute Topics: Angel Research, Angel Groups, Angel Market Data, Valuation Summary: The 2012 Halo Report is a collaborative project of Angel Resource Institute, Silicon Valley Bank, and CB Insights. The Halo Report provides on-going trends of angel group activities in US companies. ARI (n.d.). 2012haloreportinfographic [Article].

Celebrities In Social Media: What Online Marketing Means For Hollywood Column: Social media has had a tremendous impact on movie and television marketing, increasing awareness and visibility for a TV show or movie across the globe in a click — a lot clicks — of a button. Some of the best social media teams right now on TV are the two Jimmys — late-night talk hosts Jimmy Fallon and Jimmy Kimmel. How to Create a Knockout Crowdfunding Video Updated April 28, 2015. So, you've decided to launch a crowdfunding campaign. That's great news. How Funding Works - Splitting The Equity With Investors - Infographic A hypothetical startup will get about $15,000 from family and friends, about $200,000 from an angel investor three months later, and about $2 Million from a VC another six months later. If all goes well. See how funding works in this infographic: First, let’s figure out why we are talking about funding as something you need to do.