Title III Crowdfunding Became Legal on May 16: What It Does & What’s Still Lacking - Crowdfund Insider. Monday, May 16, 2016 is the first day that ordinary people—not just the super rich—will be able to invest in the next Uber or Snapchat. 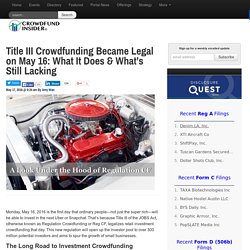 That’s because Title III of the JOBS Act, otherwise known as Regulation Crowdfunding or Reg CF, legalizes retail investment crowdfunding that day. This new regulation will open up the investor pool to over 300 million potential investors and aims to spur the growth of small businesses. The Long Road to Investment Crowdfunding In April 2012, President Barack Obama signed into law the Jumpstart Our Business Startups Act, or JOBS Act. The JOBS Act was so called because it aimed to facilitate access to capital for startups and small businesses, give more people the ability to participate in investment opportunities, and ultimately, create more jobs and stimulate economic growth.

For the first time, Title III will allow issuers to raise funds online from ordinary people for investment purposes. Going Beyond Kickstarter or GoFundMe Campaigns. 15 Hacks to Raise the Most Money for Your Indiegogo Campaign. Indiegogo is no longer just for filmmakers. 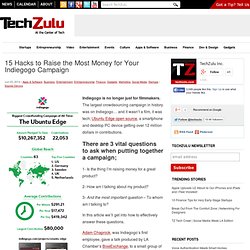 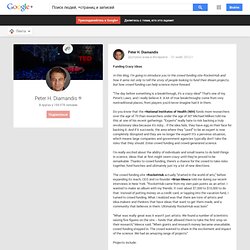 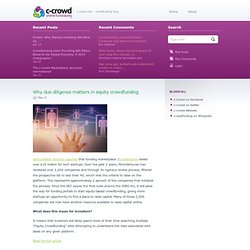 Over the past 2 years, MicroVentures has reviewed over 2,000 companies and through its rigorous review process, filtered the prospective list to less than 40, which met the criteria to raise on the platform. This represents approximately 2 percent of the companies that initiated the process. CMW Crowdfunding Panel. Never send the B team. 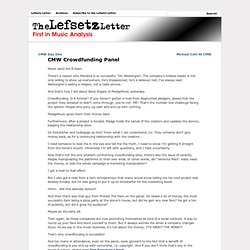 There’s a reason why Pandora is so successful. Tim Westergren. The company’s tireless leader is not only willing to show up everywhere, he’s impassioned, he’s a believer, hell, I’ve always said Westergren’s selling a religion, not a radio service. And that’s how I felt about Benji Rogers of PledgeMusic yesterday. Commentary: It’s time for our own crowdfunding law. As you are probably well aware by now, Congress passed a federal crowdfunding law. 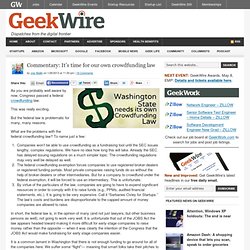 This was really exciting. But the federal law is problematic for many, many reasons. Crowdfunding More Marketing Than Fundraising: Opinion - US Business News. 1. 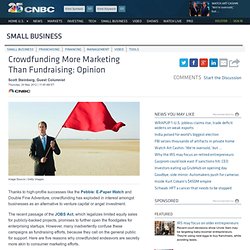 You have to give to get in return. If you simply ask for contributions, and offer nothing of value in exchange, you’ll quickly discover why crowdfunding isn’t like running a charity fundraiser. Backers expect meaningful returns in exchange for contributions — and that means offering compelling rewards. Whether providing preorders at a fraction of retail prices, exclusive merchandize, or singular experiences (e.g. a cameo in your next creation or executive producer credits), meaningful incentives must be provided. End Online Panhandling Forever! You're absolutely right about how hard it is to get any kind of funding, even under the BEST circumstances. 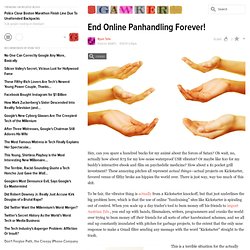 I'm a smart guy, and I have some great ideas. But I suffer from agoraphobia and acute social phobia and am living on disability. After bills and food, I literally have $30 left every month. Raising capital online: The new thundering herd. Kickstarter vs NEA with Real Numbers. Kickstarter vs NEA with Real Numbers Feb 27, 2012 Clay Johnson Kickstarter by the Numbers Yancey posted a response to my post about the NEA and Kickstarter, and in it he states my numbers are inaccurate. 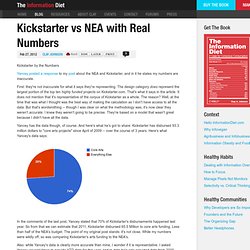 First: they're not inaccurate for what it says they're representing. The design category does represent the largest portion of the top ten highly funded projects on Kickstarter.com. Kickstarter's Sting In The Tail: Tax. Blog Archive The crowdfunding bubble of 2013. When President Obama signed the Jumpstart Our Business Startups (JOBS) Act on April 5th, the era of crowdfunding began as individual investors everywhere were promised an opportunity to gain access to venture investments previously limited to institutions, funds, and so-called qualified investors. 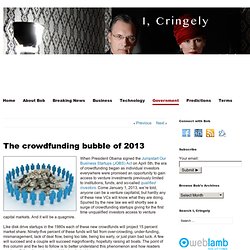 Come January 1, 2013, we’re told, anyone can be a venture capitalist, but hardly any of these new VCs will know what they are doing. Spurred by the new law we will shortly see a surge of crowdfunding startups giving for the first time unqualified investors access to venture capital markets. Crowdfunding offers startups a chance at financing their ideas from the mainstream, but what’s the catch? — Capitalist Exploits. 3 Flares Twitter 0 Facebook 3 Filament.io Made with Flare More Info 3 Flares × I wrote a piece on crowdfunding back in November, right after congress overwhelmingly passed The Entrepreneur Access to Capital Act. Well, on April 5th President Obama signed into law the Jumpstart Our Business Startups Act (aka the JOBS Act). This pretty much cements crowdfunding as an alternative to traditional capital raising channels.

That being said, the SEC will have 270 days to review the ACT and set its own rules for investors and issuers looking to become involved in this new area of capital raising. Is CrowdFunding A Boon, Or A Disaster? Crowdfunding: The Train to the Future Is Leaving—Get on Board. A social history of crowdfunding. Many refer to crowdfunding as a “new phenomenon” (or – at worst – the “new bubble”). However, it is not as new as we may think; as a concept, it has been around for some centuries already.

If it makes the mass. Developments in Crowd-funding. There’s a glimmer of hope that Congress and the Administration might be able to agree on one piece of legislation this year—the JOBS Act introduced in the House last week by Majority Leader Eric Cantor—that could do something significant for startups, and in turn the broader economy. This legislation combines a number of proposals that would change various SEC rules so as to lower the costs of raising capital by new businesses. Most of these have already separately passed the House by large bipartisan majorities.

The Obama Administration also has endorsed most of the ideas in the bill, and reportedly is willing to work with Cantor and like-minded (on this issue) Democrats in the House to get the bill passed. Crowd Funding - "Share Savings" for startups? Many Kickstarter-Funded Films Played at the Sundance Film Festival. Will Crowdfunding Drive a New Wave of Startup Investing?

Crowdfunding Promises New Opportunities for Entrepreneurs and Emerging Companies- The Law Firm of Faegre Baker Daniels. The DeanBeat: Crowd-funding gives hope to mid-size game developers. Crowdfunding Nation: The Rise and Evolution of Collaborative Funding. When Kickstarter was launched in 2009, it seemed like a unlikely proposition: fund your passion projects with money donated by eager supporters? Crowdfunding Bill Stuck in the Senate. A Proposal to Allow Small Private Companies to Get Investors Online. Crowdfunding Set to Explode with Passage of Entrepreneur Access to Capital Act. Crowdfund in 30 Seconds: The New Wave “Elevator Pitch” I'm with the Band. Crowd Funding: an alternative financing? - Blog - Reporter - Journalism & New Media.