The State of Massachusetts vs. Regulation A+: State Regulators Take the SEC to Court. On the eve of the 2015 Memorial Day weekend, Massachusetts Secretary of State William Galvin set the stage for what I expect will be the final chapter in the continuing saga of what has popularly been referred to as Regulation A+, a newly created avenue of capital formation for small and emerging businesses created by the JOBS Act of 2012. 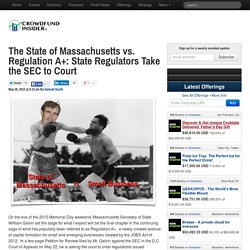 In a two page Petition for Review filed by Mr. Galvin against the SEC in the D.C. Court of Appeals on May 22, he is asking the court to undo regulations issued unanimously by the Commissioners of the SEC on March 25, 2015, currently scheduled to go into effect on June 19, 2015. Though Galvin’s detailed brief is not due to be filed with the court until June 22, You see, according to Massachusetts’ ranking securities regulator, undoubtedly a stalking horse for the North American Securities Administrators Association (NASAA), it is not sufficient for the SEC’s highly trained staff to review the disclosures in a Regulation A+ offering. Deciphering Crowdfunding For Startups. This article is written by Carlos Espinal, Partner at Seedcamp and was originally published at TheDrawingBoard. 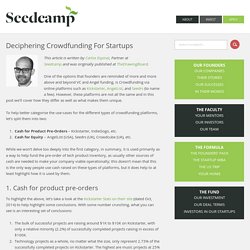 One of the options that founders are reminded of more and more above and beyond VC and Angel funding, is Crowdfunding via online platforms such as Kickstarter, AngelList, and Seedrs (to name a few). However, these platforms are not all the same and in this post we’ll cover how they differ as well as what makes them unique. To help better categorise the use-cases for the different types of crowdfunding platforms, let’s split them into two:

State Crowdfunding: What's the Big Deal? - Joe Wallin. Several times in the past few weeks I’ve been asked the following question: “What is the big deal about state crowdfunding laws?” 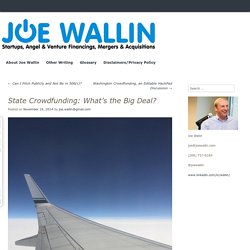 And this question is then followed by variants of: “Weren’t people doing this already?” For those of us who have been working on making state crowdfunding a reality, it is easy to forget that most people don’t know the legal lay of the land. Most people don’t understand the significance or the meaning of what we are trying to do. Welcome to Forbes. The biggest Kickstarter ever failed the first time around. 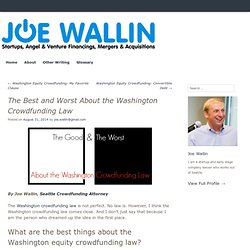 No law is. However, I think the Washington crowdfunding law comes close. And I don’t just say that because I am the person who dreamed up the idea in the first place. Every Entrepreneur Should Know These 3 Essentials About Crowdfunding. Over the last few years, a myriad of online platforms for lending money, funding projects and sourcing information have popped up across the Internet. 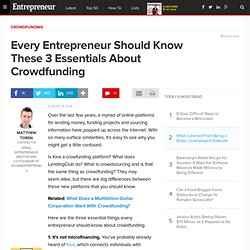 With so many surface similarities, it’s easy to see why you might get a little confused. Is Kiva a crowfunding platform? What does LendingClub do? What is crowdsourcing and is that the same thing as crowdfunding? Business News & Strategy For Entrepreneurs. Venture Capitalists Search Crowdfunding Sites for Opportunities. When crowdfunding sites like Kickstarter and Indiegogo began taking off, some thought they would make venture capitalists obsolete. 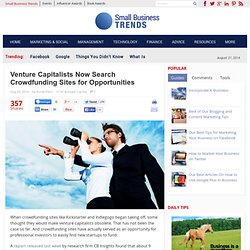 That has not been the case so far. And crowdfunding sites have actually served as an opportunity for professional investors to easily find new startups to fund. A report released last week by research firm CB Insights found that about 9 percent of the 443 hardware projects that have reached the $100,000 threshold on crowdfunding platforms have also raised venture capital. It’s easy to see why this trend has been beneficial for venture capitalists. Thousands of projects and startups looking for funding are all gathered neatly into categories that users can browse through easily. Peter Moran, a partner at venture firm DCM spoke about gauging interest through crowdfunding platforms with Bloomberg Businessweek: “We consider that an extremely helpful data point about whether the public wants a device.” Searching Photo via Shutterstock. Why VCs Love CrowdFunding? By, Steven A. 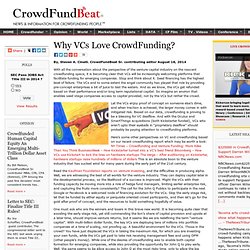 Cinelli. CrowdFundBeat Sr. contributing editor August 18, 2014 With all the conversation about the perspective of the venture capital industry on the nascent crowdfunding space, it is becoming clear that VCs will be increasingly welcoming platforms that facilitate funding for emerging companies. Stop and think about it.

Seed financing has the highest level of failure. Let the VCs enjoy proof of concept on someone else’s dime, and when traction is achieved, the larger money comes in with mitigated risk. Read the Kaufman Foundation reports on venture investing, and the difficulties in producing alpha. Learning CrowdFunding. Kickstarter Successes Pivot From Crowdfunding to Venture Capital. It turns out that people who are good at raising money through crowdfunding campaigns are also pretty good at raising money from venture capitalists. 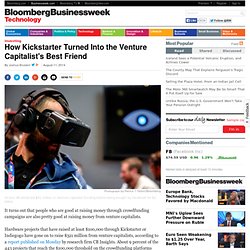 Hardware projects that have raised at least $100,000 through Kickstarter or Indiegogo have gone on to raise $321 million from venture capitalists, according to a report published on Monday by research firm CB Insights. About 9 percent of the 443 projects that reach the $100,000 threshold on the crowdfunding platforms have raised venture capital, too. When crowdfunding took off, some people believed the idea could pose a threat to venture capital as the prevailing way for technology startups to raise money.

Predictably, professional investors quickly found a way to co-opt the trend. Venture capitalists are smart enough to browse the projects on Kickstarter and conclude that the really popular ideas might turn out to be good businesses. Why didn’t crowdfunding, with its more favorable terms, become the alternative to venture capital? 5 mistakes that kill crowdfunding campaigns. Many crowdfunders put so much time into creating campaign materials, like videos, that they neglect to do something crucial: "They forget to ask people for a donation," said Swart. 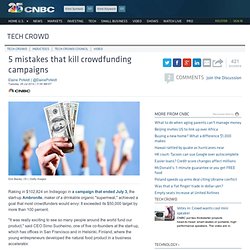 Passing around a virtual hat to collect from friends can feel awkward, so focus on explaining why your project is important and how financial support will help toward that goal. Backing a campaign, said Swart, "is an emotional decision. " Successful crowdfunders tap into people's desire to do philanthropic giving—even if those givers are motivated, in part, by the T-shirt they'll get for supporting you. You don't have to be deadly serious to tap into their emotions or to focus only on building excitement around your monetary goal. "People get too focused on dollars," said Swart.

Take a Step Back. Set a Realistic Goal for Your Crowdfunding Campaign. If I had a dime for every person who didn't understand the concept of setting a realistic crowdfunding goal, I could crowdfund the next Pebble Watch and a second Veronica Mars movie. 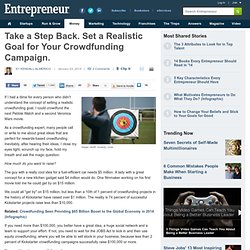 As a crowdfunding expert, many people call or write to me about great ideas that are perfect for rewards-based crowdfunding. Inevitably, after hearing their ideas, I close my eyes tight, scrunch up my face, hold my breath and ask the magic question: How much do you want to raise? The guy with a really cool idea for a fuel-efficient car needs $5 million. Upcoming Workshops. Infographic – Cracking the Crowdfunding Code. Timely and valuable data from Craig Newmark (philanthropist and founder of Craigslist) – on Crowdfunding: Its breadth and some of the nuances of success. Over 28 percent of donors on crowdfunding platforms are repeat donors.Fundraisers who use a video raise 2 times more than those without videos.More than 19M online donations were processed on #GivingTuesday in 2013.Over $9,000 on average is raised on nonprofit campaign crowdfunding pages. The full infographic is below. Crowdfunding Success – are you a Fraud? ” You’re a Fraud and a Con-Artist ! “ No one wants to hear that accusation hurled at them: particularly entrepreneurs and innovators trying to raise money from supporters and investors.

But if you are looking to use crowdfunding – the enormously popular new fundraising method – you may find yourself in for a little more trouble than you bargained for. Crowdfunding – where innovators use the power of social networks to attract thousands of small contributions and investments to fund new entrepreneurial, creative and charitable projects. Upcoming Workshops. Crowdfunding Success – are you a Fraud? Crowdfunding for Non-Profits: What You Need to Know (Part 1) (part 1 of 2) If you’re part of running a non-profit organization, no doubt you’ve heard about Crowdfunding.

More likely, you’ve been deluged with headlines, posts and articles hyping Crowdfunding as “The Next Big Thing” for fundraising. While there is a lot of hype, the reality is that Crowdfunding is indeed one of those truly disruptive phenomena. Only a few years old, online crowdfunding is still in its infancy – yet it reaped over $5 billion last year and is on track to exceed $10 billion in 2014. With the advent of new regulations and technologies, many predict crowdfunding will be a $200-$300 billion industry within a few short years.

Upcoming Workshops. Entblog.cogswell. Crowdfunding – Hands-On & Practical Saturday, March 29th 8:30 a.m. – 12:00 p.m. Cogswell Polytechnical College Crowdfunding is becoming a formidable new way to fund new entrepreneurial projects and companies – particularly for creative projects and innovative design products. Entblog.cogswell. Entblog.cogswell. Crowdfunding Fraud: How Big is the Threat? Crowdfunding is exploding as a new way of attracting funding and financing for individuals, small businesses and entrepreneurs around the world. In 2013 alone the global crowdfunding industry was responsible for between $3 and $5 billion in funding. With the passage of the JOBS Act and the subsequent revision of 80-year-old US securities regulations, crowdfunding has become a formidable new source of funding for a variety of use cases.

Already flush with cash, Alex Gizis looked to the crowdfunding site in search of enthusiastic testers. Gizis’s technology startup, Connectify Inc., raised capital in 2011 from a strategic investor to develop technology that improves wireless Web connections. Gizis then needed to figure out whether anyone would buy a product he had based on the breakthrough.

That’s where crowdfunding came in. “We said, ‘If we can get $50,000 based on videos and nobody even trying the software, we’ll know there is a market of untapped demand,’” he said. Kickstarter and peers such as Indiegogo Inc. are breaking new ground. It’s a twist on what has become an increasingly popular way to raise money for new ideas. Indiegogo, which was started in 2008 to fund independent films, now distributes millions of dollars a week around the world. Crowdfunding Strategy Template. Can Crowdfunding Solve the Startup Capital Gap? - Sramana Mitra. By Sramana Mitra | 1:00 PM July 24, 2013 No matter what industry it’s in or what product it’s selling, the absolute best way for a startup to obtain the capital it needs to grow is to generate revenue and reinvest profits. The hardware revolution will be crowdfunded. Stats.