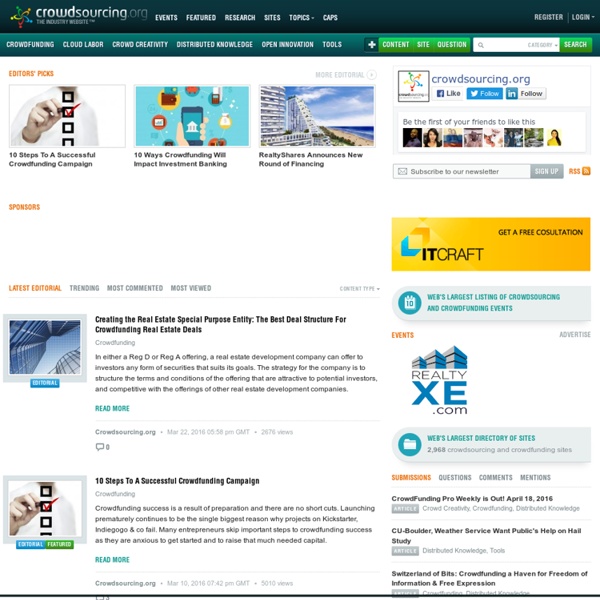 18 Ways to Earn Money From Crowdworking With the rapid rise of crowdsourcing over the last five years since the term was coined by Jeff Howe in Wired, there has been a lot of coverage on how individuals, organizations and businesses can implement the concept into their work. Last year there was a new conference (CrowdConf), a new consortium (Crowdsortium) and a myriad of companies that offered sites, tools and platforms to get more out of the Internet masses. But what about the worker? Since crowdsourcing is making such a visible impact on the way work is done, how can professionals and creatives benefit from the crowdsourcing model? Here are 18 ideas for participating on crowdsourcing sites for perks, prizes, and, yes, even income. 1.

5 Reasons Why Virtual Teams Fail: Online Collaboration « Poor management, communications breakdowns, unsuitable or badly integrated team members, ill-equipped staff, personality clashes — there are many reasons why a virtual team can fail. What can you do to ensure that your team succeeds? Here are five common failings of virtual teams, and ways to avoid them. 1. Real-time weather reports via crowdsourcing and webcams Gain instant and exclusive access to over 5,000 of the most creative ideas, innovations and startups on our database and use our smart filters to take you direct to those that are most relevant to your industry and your needs. Not interested? You can still browse articles published in the last 30 days from our homepage and receive your daily and weekly fix of entrepreneurial ideas through our free newsletters.

Deliv Raises $1 Million To Crowd Source Same-Day Local Delivery For Big Brick And Mortar Retailers More and more shopping is happening online, thanks to the low cost and convenience of having products delivered directly to users. But that is happening at the expense of big national retail chains, which are having a difficult time keeping up with online competition. A new startup called Deliv hopes to provide retailers with a new way to please tech-savvy shoppers by offering same-day local delivery for the same price — or less — than having items shipped.

Top 40 Platforms for Crowdfunding Social Change This post is a guest blog by Josef Davies-Coates and it originally appeared on the P2P Foundation blog. Crowdfunding is a new word for an old idea. The Oxford English dictionary defines it as “the practice of funding a project or venture by raising many small amounts of money from a large number of people, typically via the Internet”. Crowdfunding’s poster child, Kickstarter, launched in April 2009. It wasn’t the first online crowdfunding platform (ArtistShare launched in 2003), but it was the first to become widely known and scale. In just 3 and a half years Kickstarter has helped over 32,000 projects raise a total of over $350 million.

State regulators fight for 'crowdfunding' control As lawmakers prepare to vote on legislation that would make it easier for small businesses to raise capital, state securities regulators are scrambling to have authority over a funding strategy they say can harm investors. At issue is “crowdfunding,” a capital-raising strategy in which investors buy small stakes in ventures through various websites. Regulators say crowdfunding isn’t a major problem yet, but recent legislation aimed at helping small businesses and creating jobs could change that. The possible unintended consequences of the Jumpstarting Our Business Startups Act, or JOBS Act, have state securities regulators fearing they will be powerless to prevent potentially fraudulent offerings. State securities regulators want authority to review the crowdfunding offerings Congress wants to allow, before investors plunk down money.

Can Hobbyists and Hackers Transform Biotechnology? For most of us, managing our health means visiting a doctor. The more serious our concerns, the more specialized a medical expert we seek. Our bodies often feel like foreign and frightening lands, and we are happy to let someone with an MD serve as our tour guide. Tim O'Reilly Speaks about the Crowdsourcing Community Tim O'Reilly is such a wonderful speaker. I met him once at Tools of Change, in New York City. The conversation was very brief but I quickly realized why people gravitate to the man. During this TEDMED talk O’Reilly speaks about the power of communities. He continues to explain that it’s the community that brings people together to build something extraordinary -- and not the application.

Hire creative freelancers. You are a company, a start up, a creative agency. You need a professional of the creative industry for one of your projects. You need to hire a Freelancer for the time of your project. How Fiverr.com is changing the creative economy $5 at a time Fiverr.com co-founder Micha Kaufman The website Fiverr poses two immediate questions for its community of users: What would you do for $5 and what would you pay someone else to do for $5? And with a rapidly growing base of 600,000 service gigs, the answers to both appear nearly limitless. Crowd funding Crowdfunding is the practice of funding a project or venture by raising monetary contributions from a large number of people, typically via the internet.[1] One early-stage equity expert described it as “the practice of raising funds from two or more people over the internet towards a common Service, Project, Product, Investment, Cause, and Experience, or SPPICE.”[2] The crowdfunding model is fueled by three types of actors: the project initiator who proposes the idea and/or project to be funded; individuals or groups who support the idea; and a moderating organization (the "platform") that brings the parties together to launch the idea.[3] In 2013, the crowdfunding industry grew to be over $5.1 billion worldwide.[4]

IU Helping Create Research Network April 20, 2011 News Release ARLINGTON, Va. -- Internet2, Indiana University and the Clean Slate Program at Stanford University today announced the Network Development and Deployment Initiative (NDDI), a partnership to create a new network platform and complementary software, which together will support global scientific research in a revolutionary new way. Through substantial investments by each of the partners, the NDDI will yield a new Internet2 service called the Open Science, Scholarship and Services Exchange (OS3E).

Crowdsourcing and Crowdfunding Explained - The Productive Will Rule the World The smart folks at Crowdsourcing.org have produced a short animated film narrated by Founder, Carl Esposti that describes the four different ways Crowdsourcing works and the five different categories of things you can do with crowdsourcing. It’s an enjoyable overview that starts in the 1700’s. Enjoy…