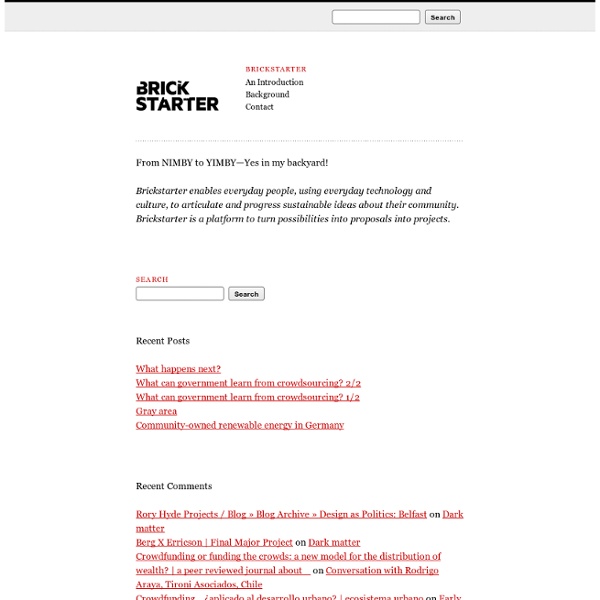 Eyes on the Solar System Explore theSolar System Start exploring our Solar System like never before with the Launch button, or jump into a module about a mission or spaceflight technology. Travel with Voyager at the edge of our solar system, land on Mars with Curiosity, learn about the power systems behind Curiosity, Voyager and other missions or fly with Juno to the giant planet Jupiter. Watch the intro to get started and the video tutorials to become an expert at using "Eyes..."

A Collective Memory of Childhood Launch event on 28 July 2012, 2-5pm, at Furtherfield Gallery Then open 9am - 7pm daily Artist and composer Michael Szpakowski has worked with local children and their families to create a generative sound sculpture that invokes the collective memory of childhood, drawing on the memories of Haringey residents from all over the world. Through a series of celebratory events at Coleridge Primary School and Furtherfield Gallery, Michael gathered field recordings of children’s' rhymes: playground, skipping, clapping and those of other games from three generations of local residents, in every language that is spoken locally. The resulting immersive soundscape, with fragments of children’s rhymes spoken by many generations changes constantly and kaleidoscopically, draws on the texts and music in endless variations will be audible during opening hours in the area around the gallery and spill over into the adventure playground from July to September 2012. About the Artist This project is supported by

Edency, crowdsourcing éditorial Online Dictionary WHO project description (2009) | New Media Concepts for the Third Sector 2009 Teachers and coordinators: Teemu Leinonen, Mari Tikkanen ( ) and visitors Description: Social media tools and services are revolutionizing how we communicate and work together. The private sector has already begun adopting these new ideas and techniques, however, the same transformation has yet to take place among the international development sector, particularly within the United Nations. The possibilities these tools provide for new, better ways for global agencies to collaborate, communicate and work in a field environment are immense, yet they have not been explored. The urgent need for innovative design thinking and creative, yet practical and feasible solutions and services, is great. The study project will last 15 weeks, starting January 1 6 th and ending May 4th in a session presenting the concept and prototypes made. Assessment criteria: Students are expected to attend at least 80% of class meetings and participate actively in the discussion/process.

Tout-electromenager.fr Today's Tomorrow My bag choice for mirror-less cameras, or small DSLR kit (24-70mm and 50mm) has been the Think Tank Retrospective 5 since 2011. Small bag, really comfortable to wear, a big fan. Think Tank recently announced the new Urban Approach series and it got my attention… Will this replace my beloved Retro 5? For my shooting style here’s my take on the two… PROS:-A more refined design… Less things I don’t need/use…. Like the small top flaps and mini interior side pockets of the RETRO 5. CONS:-I’m so use to the RETRO 5 that it feels like a second skin, The URBAN 5 feels little stiff in comparison. PROS:-Soft canvas style fabric-Slightly bigger then the URBAN 5-Great strap-After 4+ years of use it still looks and functions great. CONS:-Some complain about the accessories storage being on the inside but that never really bothered me.

Everyday African Urbanism | Africa Centre Why We Do It Urbanisation can be defined as the rapid and massive growth of, and migration to, large cities. We are currently experiencing the second most important period of urban growth and transition in the history of the world and this process is almost entirely localised within the Global South. Although today 39% of Africa is officially urbanised, this figure hides enormous discrepancies across the continent – certain countries (all of the large African economies) and regions have already reached the 50% mark while others lag far behind. A significant resource of literature dealing with everyday urbanism already exists and holds the potential to establish common ground between the critical perspectives on urbanism from Northern city literatures and contexts with the growing work of scholars in the global South who seek to develop African-based urban theory. How We Do It FOOD SECURITY PILOT The initial manifestation of the Everyday Urbanism project is the Food Security Lab.

Examples Of Myers Briggs Personalities In Stories Whatever one may say about the applicability of the Myers-Briggs indicator in Real Life, it is a valuable tool for stories. So what are some examples of characters that fit these profiles? Remember, since most of these characters are not canonically classified as one of these types, these are highly unofficial and subjective. This list is really made of the best guesses of lots of fans. .

Astounding and Interactive Sidewalk Art Around the World Alternative sidewalk design explores eco-friendly, minimally invasive ways to pave pathways for pedestrians. Artists take the concept in another direction and create a temporary reprieve from the daily grind by offering interactive spaces for play and pondering. Sometimes they’re in the concrete jungle, and other times new spaces are created in unlikely locations, allowing pedestrians to explore the terrain. The sidewalk becomes the art itself. We recently told you about a giant trampoline sidewalk, and it inspired us to search for other impressive and imaginative “sidewalk” art. See what happens when quiet footpaths, bridge walkways, city streets, and other places people tread are made over. Photo via inhabitat We mentioned the 170-foot trampoline walkway by Estonian firm Salto Architects in our Most Imaginative Design of 2012 roundup. Photo via Colossal Artist Bored created this larger-than-life Monopoly game in Chicago’s Logan Square neighborhood. Photo via Trendhunter

OpenBitTorrent - An open tracker project The Good, the Bad, and the Empty Video: Center for Urban Pedagogy Why are there so many empty lots in our neighborhood? This is the deceptively simple question posed by students at Walt Whitman Middle School in the Flatbush section of Brooklyn, and it propels The Good, the Bad, and the Empty, the latest video exploration created by the Center for Urban Pedagogy Working in partnership with the Brooklyn College Community Partnership, CUP teaching artist Douglas Paulson and the Walt Whitman students deploy a variety of story-telling techniques — from sock puppets to site videography — to tally up and analyze the empty lots in the neighborhood. The students interview local landowners, city officials, an environmental consultant, an advocate for the homeless, and a high school administrator, among others, and learn some of the non-intuitive rules of urban real estate (e.g., why it's often more profitable to leave a lot vacant and trashy than to construct something useful and attractive). — Nancy Levinson

PublicBitTorrent - An open tracker project How might we inspire and enable communities to take more initiative in making their local environments better? - Concepting - Wingpost- UPDATED A low tech solution that enables flat inhabitants to connect with each other sharing their knowledge, skills & time. Together with a team at the openIDEO Jamming session in Singapore, we came up with this low tech concept for 'wingpost'. We recognize that within a flat there is a lot of knowledge and skills & even time that can be shared. Elderly have time during the day for example for watching over kids while they need help for example with heavy groceries. We want to enable dates between inhabitants of the flats in order for them to get to know each other and establish relations in which both neighbors can help each other. Because the flat has both elderly people & younger people living there we thought of a 'wing man service' that appeals to them both. Therefore we created "Wingpost". We decided to make the concept simpler & tested a prototype in Singapore, Jurong. From the agency people get stickers that fit the size of their letterbox. Starting Wingpost Testing: Some comments we got: