Fund Science and Explore the World with Renowned Researchers - Petridish.org 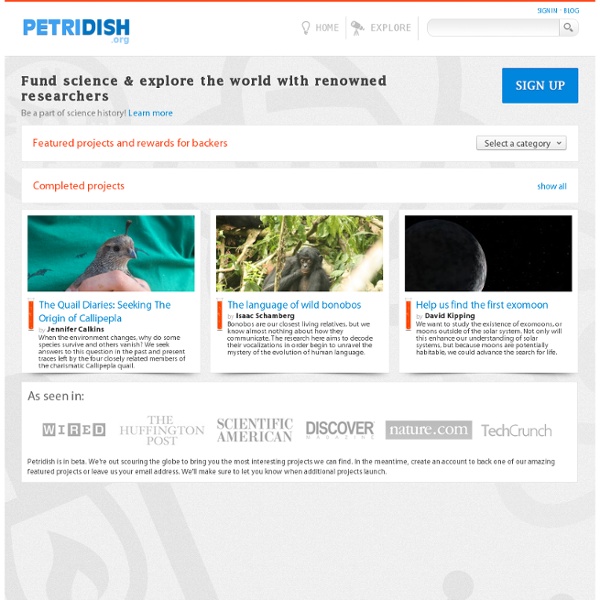 Petridish lets you fund promising research projects and join first hand in new discoveries. World famous researchers post projects and expeditions that need your help to get off the ground.Each project has a minimum threshold it must hit in pledges, or it will not be funded. Backers in successful projects join the team and get insider rewards such as: Early access to news about progress and findings, souvenirs from the field, acknowledgements in journals, naming rights for new discoveries, or the ability to join an expedition in person. Join forces with renowned researchers! Still want to know more? Read our about page .

Wall of Silence - Women's Aid This November Avon UK and GLAMOUR magazine teamed up to launch the Wall Of Silence, a campaign created by GLAMOUR reader Charli Bailey who took up the magazine's challenge to its readers to create a campaign for Women's Aid and Refuge. The Wall Of Silence is made up of real people who have posted "shhh" selfies tagged #wallofsilence on Instagram, Twitter, Facebook or uploaded them directly to the site. It has also been supported by some of Women's Aid's celebrity supporters, including Ambassadors Jahmene Douglas and Charlie Webster (below).

The triumph of fake open access It’s been a heady day for “open access”. A petition urging the Obama administration to extend the NIH’s public access policy to other government agencies blew past the halfway point in its goal to gather 25,000 signatures. And the faculty senate at UCSF voted to approve an “open access” policy that would “require” its faculty to make all of their papers freely available. Both of these are important steps in the long-running push for open access. But amidst the giddy triumphalism surrounding these events on blogs and twitter, an important point is being ignored: neither of these are really “open access” policies, and treating them as if they are trivializes their shortcomings in critical areas and risks people declaring premature victory when there is no much more left to be done. I’ll start with the White House petition.

Top 40 Platforms for Crowdfunding Social Change This post is a guest blog by Josef Davies-Coates and it originally appeared on the P2P Foundation blog. Crowdfunding is a new word for an old idea. The Oxford English dictionary defines it as “the practice of funding a project or venture by raising many small amounts of money from a large number of people, typically via the Internet”. Click To Give @ The Rainforest Site Hokey Smoke, A Flying Squirrel! The amazing flying squirrel doesn't need wings to soar. This aerodynamic rodent has flexible membranes connecting its front and hind legs that let it glide through the air with ease. The Mule Deer Whisperer Biologist Joe Hutto spent seven years bonding with a herd of mule deer, and now they consider him part of the family. During his research, Hutto noted the incredible intelligence and curiosity of the mule deer, and their mysterious ability to recognize meaning from language.

The real process of science The process of science, as represented here, is the opposite of "cookbook" (to see the full complexity of the process, roll your mouse over each element). In contrast to the linear steps of the simplified scientific method, this process is non-linear: The process of science is iterative.Science circles back on itself so that useful ideas are built upon and used to learn even more about the natural world. This often means that successive investigations of a topic lead back to the same question, but at deeper and deeper levels. Let's begin with the basic question of how biological inheritance works. In the mid-1800s, Gregor Mendel showed that inheritance is particulate — that information is passed along in discrete packets that cannot be diluted.

How Fiverr.com is changing the creative economy $5 at a time Fiverr.com co-founder Micha Kaufman The website Fiverr poses two immediate questions for its community of users: What would you do for $5 and what would you pay someone else to do for $5? And with a rapidly growing base of 600,000 service gigs, the answers to both appear nearly limitless. "When we looked at what was out there, we realized that there were options for people that were willing to work for as little as one cent," Fiverr co-founder Micha Kaufman told Yahoo News in a phone interview from Israel. Learning to Give - Teachers Moments of Service Lesson Plans Themed teaching resources to support calendar events. Includes lesson plans, toolkits, project ideas, and more. Toolkits Guides designed for service coaches to support teachers and volunteers with resources, ideas, tips, and stories. Webinars

The 4 fatal flaws of failed Kickstarter campaigns Crowdfunding is having monumental impacts upon all across all areas of entrepreneurship. Founders who would once require tens if not hundreds of thousands of dollars in seed rounds or bank financing are skipping altogether the cumbersome and costly route of equity and debt based funding and instead coming to Kickstarter. This is changing the face of business as we know it. With just Kickstarter campaigns raising over $112 million in the first quarter of 2014 and $144 million in the second quarter; it’s clear crowdfunding is becoming a prolific player in the power struggle for startup growth.

iparticipate.org 3 Internet of Things Security Nuances You May Not Have Considered Over the past 18 months, I’ve been in a variety of situations where I had the opportunity to discuss the Internet of Things (IoT) with various industry professionals, developers and journalists. It intrigued me to realize that many of my viewpoints often differed from others discussing the topic in articles or event presentations. With that in mind, I wanted to share three topics that I find are discussed less frequently. Regardless, these topics should be an important aspect of the conversations we need to be having on this rapidly growing subject. 1. Crowd funding and IoT Go Hand-in-Hand

Crowdfunding rare disease research – one family at a time If one of your loved ones was sick, what would you be willing to do to help? For millions of Americans in the US, even though they would give up anything and everything, there is no way for them to help. For many rare diseases, because they are so rare, there are no therapies or even diagnostics. What is needed is research. Pubslush Is Like Kickstarter for Authors Name: Pubslush Big Idea: Pubslush is injecting Kickstarter-esque crowdfunding into the publishing process. Why It's Working: Traditional publishing has a lot of overhead costs and bureaucracy that make it hard for potentially popular books to get published; with it's pledging model, Pubslush guarantees an audience before putting ink to paper.

MDMA The Movie Watch our First Short Film on MDMA Therapy A Dangerous Party Drug? Despite the drug war, the recreational use of MDMA has spread around the globe, and its use is only rising. Unfortunately, so are “ecstasy-related” fatalities. Hacking Kickstarter: How to Raise $100,000 in 10 Days (Includes Successful Templates, E-mails, etc.) Mike Del Ponte co-founded Soma, which raised more than $100,000 on Kickstarter using virtual assistants and free apps. I first met Mike Del Ponte two years ago when he was running marketing at BranchOut, a startup I advise. Before joining BranchOut, Mike had explored a variety of career paths, including preparing for the priesthood at Yale Divinity School and serving as a peacemaker in the West Bank. Earlier this year, Mike came to me with a new product idea called Soma.