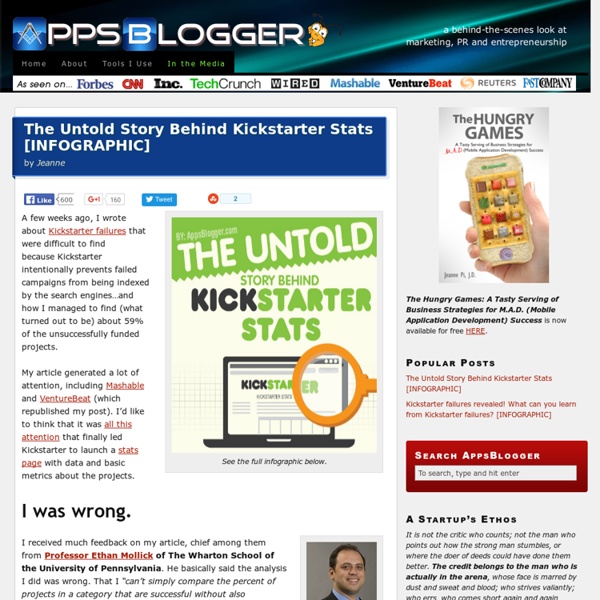 See the full infographic below. A few weeks ago, I wrote about Kickstarter failures that were difficult to find because Kickstarter intentionally prevents failed campaigns from being indexed by the search engines…and how I managed to find (what turned out to be) about 59% of the unsuccessfully funded projects. My article generated a lot of attention, including Mashable and VentureBeat (which republished my post). I’d like to think that it was all this attention that finally led Kickstarter to launch a stats page with data and basic metrics about the projects. I was wrong. Prof. I received much feedback on my article, chief among them from Professor Ethan Mollick of The Wharton School of the University of Pennsylvania. Also, some people objected to my use of the term “failure” on projects that did not get fully funded. Give us some real insights! I heard you loud and clear, so I got in touch with Prof. And don’t think that crowdfunding is a passing fad, either. Getting it right this time.

Kickstartup — Successful fundraising with Kickstarter & the (re)making of Art Space Tokyo It starts with a book. Art Space Tokyo is a book best described as a guide to some of the hidden galleries and museums in the city. Editor and co-author Ashley Rawlings and I put the book together in 2008. The book is important to us because we put so much work into its production. When writing Book in the Age of the iPad,[2] I was largely thinking about Art Space Tokyo. I spent a good chunk of 2009 thinking about the convergence of digital and analog in the publishing world, and this year (2010) I began to speak publicly and publish articles on the subject. In the spring of 2010, a few stars aligned and I was able to buy back the publishing rights to Art Space Tokyo. Once I had obtained the publishing rights, the only question was: How do we fund this? I wanted to use Kickstarter the moment I heard about it back in mid-2009. Kickstarter.com is a fundraising website. Backers simply can't lose — if you can’t complete the project, they don’t pay. Silkscreening The slippers are mine. Twitter

Trends in Pricing and Duration » The Kickstarter Blog A couple of weeks ago we linked to Craig Mod’s gorgeous and thorough breakdown of his Kickstarter project Art Space Tokyo. In the post Craig sampled other popular projects on Kickstarter, and explained how their choices and outcomes affected the way he constructed his project. Craig also offers some advice on optimal pricing and project length to future project creators. We were intrigued and impressed by Craig’s research and conclusions, and we’ve now compiled data from our entire database to see how it holds up. Let’s dig in. Reward Popularity and Power In sampling the Top 20 grossing successful projects, Craig observed that $50 rewards appeared to dominate — accounting for almost 25% of all revenue to the projects he sampled. But pledges aren’t just about dollars raised. The lower priced levels are also significant. In his report, Craig argues that lower tiers are “statistically insignificant” and that creators should avoid them. The Trough Project Duration Choice and Success Thanks!

DIY Filmmaking Sucks: Secrets of successful IndieGoGo and Kickstarter crowdfunding At Sundance this year, the DIY distribution guru Peter Broderick hosted a fast-paced overview of successful crowdfunded projects, sponsored by IndieGoGo. For anyone interested in trying to raise funds in small denominations (i.e. crowdfunding), it was a rapid-fire boot camp of best-practices. Currently, the two most popular crowdfunding platforms for indie films are IndieGoGo and Kickstarter. Your video makes all the difference -- make it personal and high-quality.Whether you use IndieGoGo, Kickstarter or your own website, you should produce a video to introduce people to your project and ask for donations. The key to your success is to make it personal. Don't recreate the wheel: steal ideas that workWhen you're building your crowdfunding campaign, don't do it in a bubble. Look through IndieGoGo and Kickstarter at the other projects listed -- particularly the successful ones with lots of donors. Generally, only people you know (particularly family and close friends) will donate cash.

The Ultimate Crowdfunding TO-DO list: BEFORE YOU LAUNCH | Nathaniel Hansen - Filmmaker 7 Things to Consider BEFORE you Launch your Kickstarter Project I get A LOT of requests to help with kickstarter campaigns. Through trial and error on over a dozen kickstarter projects, hours of lectures at Emerson College, and countless meet ups, phone calls and emails with artists and innovators, I’ve refined a “best practices” list that I share when I decide to get involved with a project. Disclaimer:This list is not definitive. Story is everything. This also leads into one of the most important visual components of your story, in that you ABSOLUTELY MUST HAVE A PITCH VIDEO (and a trailer of your film doesn’t count). a. b. c. The Elders The Price Freaker The Last Cause We really do. This list should include the names and emails of those in your circle that care about you. List building is like brainstorming and you can make many associations based off one name that leads to others. a. b. c. 4. If you don’t like writing, you’d better start. There are several things you need to write. a.

What successful Kickstarter campaigns have in common Kickstarter’s unfortunate and inaccurate reputation of being a place where dreams get magically funded has been wholly corrected by recent media coverage. It has become overly apparent that running a Kickstarter campaign is not easy; it takes a lot of work around promoting and leveraging your networks, exercising every connection you have to drive traffic to your Kickstarter page. Lucky breaks are few and far between. As we have come to understand that the difference between a success and failure are primarily around the creator’s network and promotional efforts and having a video, there hasn’t been a lot of information about what quantitative and tangible aspects of a project help it to succeed or fail. I set out to answer some of the most pressing questions on creators’ minds. Q: I’ve heard that 30 days is the best campaign length. A: Turns out, absolutely not. 29 to 41 days is the sweet spot for all projects, regardless of the size of the goal. A: Yes, even more so than above.

The hidden cost of Kickstarter success “Crowdfunding isn’t a magic bullet,” Amanda Palmer once told the Daily Dot in regards to her blockbuster $1.1 million Kickstarter campaign. “You can’t crowdfund without a crowd, and you can’t start a project from scratch and get people interested in it. You need to have some degree of reach and some small starting point. Since launching in 2009, Kickstarter has gone from a last-ditch resort to the method of choice for artists looking to fund their next creative endeavor. There are, however, unexpected side effects to Kickstarter success—complications that can hinder artists and strain, instead of strengthen, the bond between creators and their fans. In the fall of 2010, Fastball guitarist Miles Zuniga turned to Kickstarter to help jump start his solo career. “It was my first time doing a Kickstarter project, so taxes were the furthest thing from my mind,” Zuniga recalled. “I remember saying, ‘But… but… it’s going towards making a record, and I’m not going to see any of the money!

Crowdfunding News and Tips 21 places to promote your kickstarter campaign Want to get more traffic? Need help with your campaign? I’ve received a lot of emails, DMs, and facebook messages asking for help with campaign promotion. When I receive a personal email and I can tell the person either has read my content or has at least taken a second to look at CrowdCrux, I am more likely to respond positively. That being said, here are 21 places to promote your crowdfunding campaign. After you’ve finished with this list, check out my new article, Who’s in the Crowdfunding Community for a huge list of supporters, service providers, bloggers, and more that are interested in crowdfunding. Note: These are crowdfunding industry centric sites. Industry Websites Crowd Funding Forum is a great crowdfunding industry site where you can also engage in a discussion with other project creators, track news trends, the hottest projects of the week, and also learn about equity crowdfunding. Google+ Groups 5. 6. “A Community where we Like, Share and Support Kickstarter Campaigns” 7. 8.