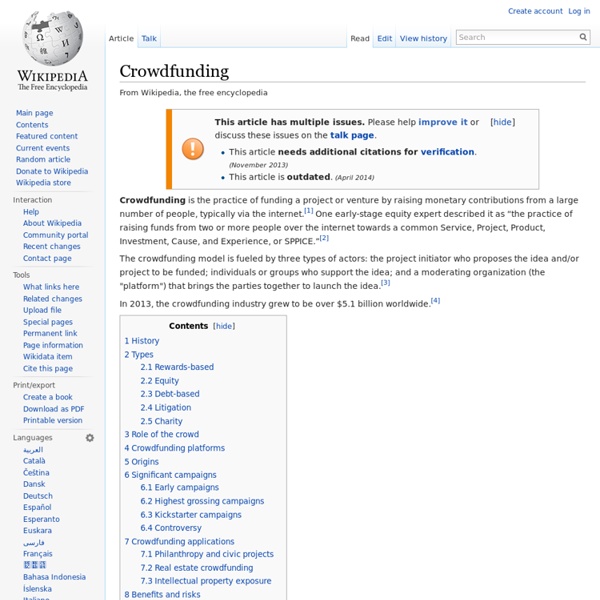 Crowdfunding is the practice of funding a project or venture by raising monetary contributions from a large number of people, typically via the internet.[1] One early-stage equity expert described it as “the practice of raising funds from two or more people over the internet towards a common Service, Project, Product, Investment, Cause, and Experience, or SPPICE.”[2] The crowdfunding model is fueled by three types of actors: the project initiator who proposes the idea and/or project to be funded; individuals or groups who support the idea; and a moderating organization (the "platform") that brings the parties together to launch the idea.[3] In 2013, the crowdfunding industry grew to be over $5.1 billion worldwide.[4] History[edit] Types[edit] The Crowdfunding Centre's May 2014 report identified the existence of two primary types of crowdfunding: Rewards-based[edit] Equity[edit] Debt-based[edit] Litigation[edit] Charity[edit] Role of the crowd[edit] Crowdfunding platforms[edit] Origins[edit] Press

Related:  Jobs of the future and Automation • Global-scale funding/finance

Seed money Seed money, sometimes known as seed funding, is a form of securities offering in which an investor purchases part of a business. The term seed suggests that this is a very early investment, meant to support the business until it can generate cash of its own, or until it is ready for further investments. Seed money options include friends and family funding, angel funding, and crowdfunding.[1] Usage[edit] Startup Financing Cycle Seed money can be used to pay for preliminary operations such as market research and product development. State regulators fight for 'crowdfunding' control As lawmakers prepare to vote on legislation that would make it easier for small businesses to raise capital, state securities regulators are scrambling to have authority over a funding strategy they say can harm investors. At issue is “crowdfunding,” a capital-raising strategy in which investors buy small stakes in ventures through various websites. Regulators say crowdfunding isn’t a major problem yet, but recent legislation aimed at helping small businesses and creating jobs could change that.

Keyline Swales - a Geoff Lawton/Darren Doherty Hybrid Permaculture Research Institute A swale on Zaytuna Farm – © Craig Mackintosh (Remaining images below © Cam Wilson.) Geoff Lawton and Darren Doherty are the two highest profile people in Australian Permaculture when it comes to broadacre water harvesting earthworks. They’ve both had success in some very tough environments, and yet it’s interesting that their styles are quite different, particularly when it comes to infiltration strategies. This article is a short comparison of their approaches, along with an idea I had recently for amalgamating the benefits of each. To help illustrate, I’ve put a set of boundaries on a section of a topographic map (figure 1.1). Figure 1.1 – Base Map

Kickstarter Kickstarter is a crowdfunding platform.[2] The company’s stated mission is to help bring creative projects to life.[3] Kickstarter claims it has received over $1 billion in pledges from 5.7 million donors to fund 135,000 projects, such as films, music, stage shows, comics, journalism, video games, and food-related projects.[4] People who back Kickstarter projects are offered tangible rewards and special experiences in exchange for their pledges.[5] This model traces its roots to subscription model of arts patronage, where artists would go directly to their audiences to fund their work.[6] History[edit] Andy Baio served as the site's CTO until November 2010, when he joined Expert Labs.[13] Lance Ivy has been Lead Developer since the website launched.[14] On February 14, 2013, Kickstarter released an iOS app called Kickstarter for the iPhone.[15] The app is aimed at users who create and back projects and is the first time Kickstarter has had an official mobile presence.[16]

The Myth of a Superhuman AI I’ve heard that in the future computerized AIs will become so much smarter than us that they will take all our jobs and resources, and humans will go extinct. Is this true? That’s the most common question I get whenever I give a talk about AI. The questioners are earnest; their worry stems in part from some experts who are asking themselves the same thing. Angel investor - Wikipedia An angel investor or angel (also known as a business angel, informal investor, angel funder, private investor, or seed investor) is an affluent individual who provides capital for a business start-up, usually in exchange for convertible debt or ownership equity. A small but increasing number of angel investors invest online through equity crowdfunding or organize themselves into angel groups or angel networks to share research and pool their investment capital, as well as to provide advice to their portfolio companies.[1] Etymology and origin[edit] The term "angel" originally comes from Broadway theater, where it was used to describe wealthy individuals who provided money for theatrical productions that would otherwise have had to shut down.

Geltfiend Chanukah Sweaters! by Carin Agiman Geltfiend needs you! It's about time that we had something awesome to wear around the holidays. Chanukah deserves the love---it's been the ugly stepsister for a while. We've put everything we have---hearts, minds, and yes, our tax refund money, into designing Chanukah sweaters that will definitely (1) keep you warm, (2) set you apart from the Christmas sweater-wearin' folk, and (3) make you look good. Damn good. Database Search To the best of our knowledge all the information contained herein is accurate and true. However we cannot guarantee that everyone will react positively to all edible plants or other plant uses. It is commonly known that many people suffer allergic reactions to conventional foods and products.

Frog Design: 3 Things Wile E. Coyote Teaches Us About Creative Intelligence Bruce Nussbaum was right to close the book on Design Thinking. It is time to move on. Business never really got the message. Robots Will Transform Fast Food Visitors to Henn-na, a restaurant outside Nagasaki, Japan, are greeted by a peculiar sight: their food being prepared by a row of humanoid robots that bear a passing resemblance to the Terminator. The “head chef,” incongruously named Andrew, specializes in okonomiyaki, a Japanese pancake. Using his two long arms, he stirs batter in a metal bowl, then pours it onto a hot grill.

Patronage - Wikipedia Patronage is the support, encouragement, privilege, or financial aid that an organization or individual bestows to another. In the history of art, arts patronage refers to the support that kings, popes, and the wealthy have provided to artists such as musicians, painters, and sculptors. It can also refer to the right of bestowing offices or church benefices, the business given to a store by a regular customer, and the guardianship of saints. 18 Ways to Earn Money From Crowdworking With the rapid rise of crowdsourcing over the last five years since the term was coined by Jeff Howe in Wired, there has been a lot of coverage on how individuals, organizations and businesses can implement the concept into their work. Last year there was a new conference (CrowdConf), a new consortium (Crowdsortium) and a myriad of companies that offered sites, tools and platforms to get more out of the Internet masses. But what about the worker? Since crowdsourcing is making such a visible impact on the way work is done, how can professionals and creatives benefit from the crowdsourcing model?