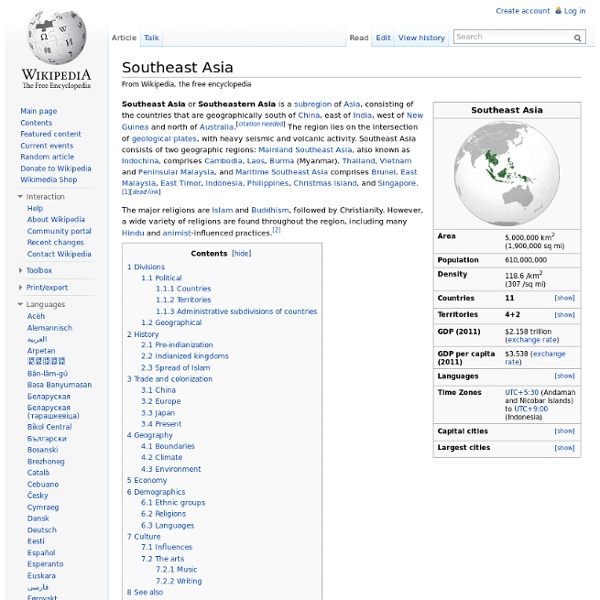 Southeast Asia or Southeastern Asia is a subregion of Asia, consisting of the countries that are geographically south of China, east of India, west of New Guinea and north of Australia.[1] The region lies on the intersection of geological plates, with heavy seismic and volcanic activity. Southeast Asia consists of two geographic regions: The major religions are Islam, Buddhism and Taoism, followed by Christianity. However, a wide variety of religions are found throughout the region, including Hinduism and many animist-influenced practices.[3] Divisions[edit] A constructed map shows the diversity of every culture in Southeast Asia. Political[edit] Countries[edit] Territories[edit] Location of Southeast Asia[8] Administrative subdivisions of countries[edit] Geographical[edit] Southeast Asia is geographically divided into two subregions, namely Mainland Southeast Asia (or Indochina) and Maritime Southeast Asia (or the similarly defined Malay Archipelago) (Indonesian: Nusantara). History[edit]

Cross-Cultural Adaptation COM 372—Theory and Research in Intercultural Communication Updated 11 June 2013 A General Introduction Adaptation: Going Abroad · Many authors have theorized and researched the notion of cross-cultural adaptation, which entails moving from one culture to another culture, usually (but not always) learning the rules, norms, customs, and language of the new culture. o Short-term travelers, such as those on vacations or business trips. o Sojourners, those who travel to a culture for an extended time, but still one with planned limits—that is, a plan to return, such as international students or those on an extended business assignment of (for example), one to three years o Immigrants, those who move to another culture with plans of making that culture their new home · Of course, even immigrants can vary on several dimensions, which become important later, such as: o Social class/support: Often, but not always, social class combines with purpose of immigration. Today’s notes cover two main themes: o

Expanding Your Cultural Intelligence Quiz | RealMagazine – Winter/Spring 2014 Your CQ can be as important as your IQ Few subjects are as massive and complex as culture. Here’s how the American Heritage English Dictionary leads off its definition of the term: “the totality of socially transmitted behavior patterns, arts, beliefs, institutions, and all other products of human work and thought.” The “all other products” qualifier would strain the resources of most anyone’s cultural quotient, or CQ, which global-competence researchers, Linn Van Dyne, Soon Ang and Christine Koh, interpret as an individual’s “capability to function effectively in situations characterized by cultural diversity.” Diversity, of course, at least according to the U.S. education, geographic origin, and skill characteristics.” For the purposes of this quiz, which will begin shortly, culture will be sighted and united by nations. Individualism: This dimension measures the degree of interdependence in a society, distinguishing between self-images based on “I” or “We.” or just let life happen?

Protocol Professionals, Inc. | Chinese Etiquette & Protocol Confucius, China's greatest sage established a system of ethics, morals, hierarchy and behavior, setting the rules for people dealing with other people, and establishing each person's proper place in society. The five major relationships set forth by Confucius: Key concepts in understanding Chinese culture: Guanxi - Throughout much of Chinese history, the fundamental glue that has held society together is the concept of guanxi, relationships between people. Mianzi - Face - Losing face, saving face and giving face is very important and should be taken into consideration at all times. Li - Originally li meant to sacrifice, but today it is translated as the art of being polite and courteous. Keqi - Ke means guest and qi means behavior. Getting to Know Each Other Greetings and Introductions

Richard Lewis Communications - Negotiating across Cultures “In all negotiations of difficulty, a man may not look to sow and reap at once; but must prepare business, and so ripen it by degrees” – Francis Bacon (1561-1626) ‘Of Negotiating’ Negotiation is probably as old as mankind itself and was born out of Homo Sapiens’ early struggles for survival and dominance. During the last century or so, negotiation has become a science, dominated by the Americans. But anyone who has mediated at, for instance, a Japanese-US joint venture knows that the moment intercultural factors enter the equation, the landscape can change utterly. It has always been advisable to understand the cultural factors in international negotiations. In times of financial crisis, people are under psychological stress and there is a tendency to assert our cultural values more powerfully when under pressure. In international negotiation, cultural preparation to understand different worlds is central to successful strategy and tactics. It is dangerous to rely on our intuitions.

Issues in Cross-Cultural Communication CULLISON: There must be witty expressions, though, that don’t make it across the cultural gap. MURAMATSU: Well, take the American saying "It won’t play in Peoria." I’ve heard it used, I know what it means. The other day in Osaka an American businessman, arguing against some Japanese proposals, said "It won’t hold in Washington, and certainly not in Peoria." CULLISON: So what did you do? MURAMATSU: I just disregarded Peoria and paraphrased it as "It won’t be accepted by the people in Washington, government people, Congressmen, and certainly not by the average citizen." But these are the things that spice our conversation, make it interesting, so they shouldn’t be discouraged. CULLISON: Are there any other danger points that you can think of? MURAMATSU: Religion, yes. CULLISON: But there are all kinds of English, as you know. MURAMATSU: Yes. - from

History of Syria The history of the region now known as Syria, and the nations (or pre-national civilizations) previously occupying its territory: Prehistory[edit] The oldest remains found in Syria date from the Palaeolithic era (c.800,000 BC). Archaeologists have demonstrated that civilization in Syria was one of the most ancient on earth. Ancient Syria[edit] Clay tablet from Ebla's archive Ebla was probably conquered by Sargon of Akkad around 2330 BC. When the Middle Assyrian Empire began to deteriorate in the late 11th century BC, Canaanites and Phoenicians, came to the fore and occupied the coast, and Arameans supplanted the Amorites in the interior, as part of the general disruptions and exchanges associated with the Bronze Age Collapse and the Sea Peoples. The city of Antioch was the third largest city in the Roman Empire, after Rome and Alexandria. With the decline of the empire in the west, Syria became part of the East Roman, or Byzantine, Empire in 395. Medieval era[edit] Ottoman era[edit]

International Journal of Intercultural Relations IJIR is dedicated to advancing knowledge and understanding of theory, research and practice in the field of intercultural relations, including, but not limited to, topics such as immigrant acculturation and integration; intergroup relations, and intercultural communication that have implications for social impact. The journal publishes quantitative and qualitative empirical research and reviews of research literature. Both full length papers and brief reports are published with high priority given to manuscripts that join theory and research with applications in the areas of education, health, social welfare and organizational and community development. Benefits to authorsWe also provide many author benefits, such as free PDFs, a liberal copyright policy, special discounts on Elsevier publications and much more. Please see our Guide for Authors for information on article submission. Hide full aims and scope

Navigating the Cultural Minefield When Aaron arrived in Moscow to take charge of the manufacturing plant his Israeli-owned company had just purchased, he expected to settle in quickly. Although he’d grown up in Tel Aviv, his parents were Russian-born, so he knew the culture and spoke the language well. He’d been highly successful managing Israeli teams and had led a large organization in Canada. Yet six months into his new job, he was still struggling to supervise his team in Moscow. Answering such questions isn’t easy, as I’ve learned from 16 years studying the effects of cultural differences on business success. Time and again, I find that even experienced and cosmopolitan managers have faulty expectations about how people from other cultures operate. To help managers like Aaron negotiate this complexity, I have built on the work of many in my field to develop a tool called the Culture Map. The Culture Map The eight scales on the map are based on decades of academic research into culture from multiple perspectives.

businessinsider Managing Global Virtual Teams Overview | INSEAD Making Distance and Diversity your Competitive Advantages How do managers organise globally dispersed teams? How do they build trust when their team members work together but not face to face? These are the key questions that Managing Global Virtual Teams tackles. How you benefit Benefit as one cohesive team: Gain from the unique benefits that global teams can bring to international organisations when designed and managed effectively.Maximise the performance of your global virtual team: Develop the ability to implement strategies that increase collaboration, trust and team effectiveness for optimal performance.Handle diversity issues effectively: Create processes to overcome barriers that typically arise with global teams stemming from language and time differences.Benchmark your individual leadership style: Successfully manage team members from a wide range of cultural backgrounds. Participant Profile

Bavaria State in Germany Bavaria (; German and Bavarian: Bayern [ˈbaɪɐn]), officially the Free State of Bavaria (German and Bavarian: Freistaat Bayern [ˈfʁaɪʃtaːt ˈbaɪɐn]), is a landlocked federal state of Germany, occupying its southeastern corner. With an area of 70,550.19 square kilometres (27,200 sq mi), Bavaria is the largest German state by land area comprising roughly a fifth of the total land area of Germany. With 13 million inhabitants, it is Germany's second-most-populous state after North Rhine-Westphalia. The history of Bavaria includes its earliest settlement by Iron Age Celtic tribes, followed by the conquests of the Roman Empire in the 1st century BC, when the territory was incorporated into the provinces of Raetia and Noricum. The Duchy of Bavaria dates back to the year 555. Modern Bavaria also includes parts of the historical regions of Franconia and Swabia. History[edit] Antiquity[edit] Middle Ages[edit] The Kingdom of Bavaria in 900 Bavaria in the 10th century Flags[edit] [edit]

Symbolism of Hindu Deities Explained By Subhamoy Das Updated November 29, 2016. The Vedic deities symbolize the forces of nature as well as inside human beings. While discussing the symbolic significance of Vedic deities in his The Secret of the Vedas, Rishi Aurobindo says that the gods, goddesses, and demons mentioned in the Vedas represent various cosmic powers, on one hand, and man's virtues and vices on the other. Why Worship Idol? Idol worship and rituals are at the heart of Hinduism have great religious and philosophical significance. Why Worship Different Deities? Unlike the followers of any other religion, Hindus enjoy the freedom of worshipping their personally chosen icon to offer their prayers to the indefinable Brahman. For this, man has to gain the goodwill of different gods who stir up his consciousness accordingly to help him master the different forces of nature. Symbolism of Gods & Goddesses Many deities can be recognized by the symbols associated with them. Vehicles of the Gods