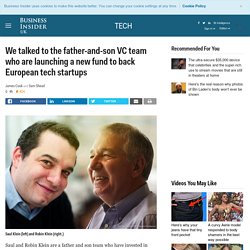 Saul and Robin Klein are a father and son team who have invested in some of Europe's biggest technology startups. Between them they have backed TransferWise, Citymapper, TweetDeck, Graze, Zoopla, Songkick, Chartbeat, MOO and Farfetch. Saul Klein also cofounded LoveFilm and startup accelerator Seedcamp, and was one of Skype's original executives. Now the pair are joining forces for their own venture capital fund: LocalGlobe, which they say will invest in startups at the seed stage across Europe. So far the fund has announced investments in online mortgage advisor Trussle and also Estonian job search app Jobbatical. Business Insider met with the Kleins at LocalGlobe's office in London to talk about Europe's technology potential, whether we're in a tech bubble, overvalued startups, artificial intelligence and Brexit. We began by asking the pair about the current state of European technology: SK: For sure we will. A guide to what it costs to open your own restaurant, cafe or bar?

I’ve been working with food, beverage and hospitality businesses for over 10 years and I’m answering the same questions today that I was back then. 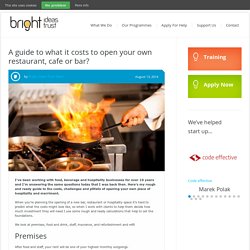 Here’s my rough and ready guide to the costs, challenges and pitfalls of opening your own place of hospitality and merriment. When you’re planning the opening of a new bar, restaurant or hospitality space it’s hard to predict what the costs might look like, so when I work with clients to help them decide how much investment they will need I use some rough and ready calculations that help to set the foundations. We look at premises, food and drink, staff, insurance, and refurbishment and refit Premises After food and staff, your rent will be one of your highest monthly outgoings.

Guide to opening a Restaurant or Cafe. Europa Oil & Gas - Investors. Subscribe Subscribe to Europa's news release list to receive our latest investor press releases and news articles.Register now AIM Rule 26 This information has been disclosed pursuant to Rule 26 of the AIM Rules for Companies. 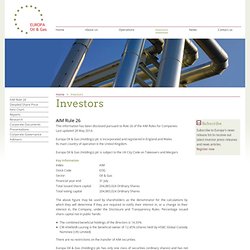 Last updated 28 May 2014. Europa Oil & Gas (Holdings) plc is incorporated and registered in England and Wales Its main country of operation is the United Kingdom. Europa Oil & Gas (Holdings) plc is subject to the UK City Code on Takeovers and Mergers Key Information The above figure may be used by shareholders as the denominator for the calculations by which they will determine if they are required to notify their interest in, or a change to their interest in, the Company, under the Disclosure and Transparency Rules. The combined beneficial holdings of the directors is 14.33%. There are no restrictions on the transfer of AIM securities. Egdon Resources. Cuadrilla Resources. Alkane is a clean tech 'Gas to Power' energy company that uses methane to generate electricity.

Cart - The Fleet Street Letter. Pro.fleetstreetpublications.co.uk/fsl-natgas-tpr123/WFSLQ801/?h=true. Sources: British Geological Society estimate there could be 1,300 trillion cubic feet of shale gas beneath the Blackpool rock in the Bowland Basin – The Guardian, Fracking: energy futures, The discovery of huge reserves of shale gas may signal an energy revolution in Britain – but no one should count on it, 27 June 2013 The UK could be sitting on £1 trillion and £9.5 trillion worth of natural gas – Calculations based on estimates of UK shale reserves (1,300 tcf of gas), and current natural gas prices ($16.46 per 1000 cubic ft of gas) Corin Taylor believes fracking shale gas could create 'a new North Sea' for Britain – Interactive Investor, Is the UK set for a shale gas revolution? 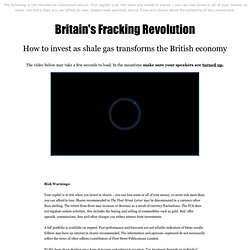