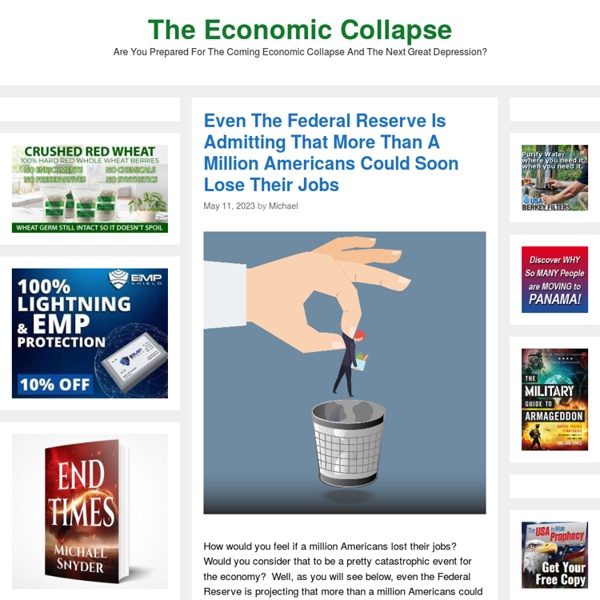 Do you think that the price of food is high now? Just wait. If current trends continue, many of the most common food items that Americans buy will cost more than twice as much by the end of this decade. Global demand for food continues to rise steadily as crippling droughts ravage key agricultural regions all over the planet. You see, it isn't just the multi-year California drought that is affecting food prices. Down in Brazil (one of the leading exporters of food in the world), the drought has gotten so bad that 142 cities were rationing water at one point earlier this year.

Agenda 21 Agenda 21 is Sustainable Development, and was created through the United Nations. It is the blueprint for depopulation and total control, under the banner of saving the environment. It is like the head of a beast that has thousands of tentacles, originating from the United Nations. The 3 primary tools that are used are: About WND, formerly WorldNetDaily, can best be explained by its mission statement: “WND is an independent news company dedicated to uncompromising journalism, seeking truth and justice and revitalizing the role of the free press as a guardian of liberty. We remain faithful to the traditional and central role of a free press in a free society – as a light exposing wrongdoing, corruption and abuse of power. “We also seek to stimulate a free-and-open debate about the great moral and political ideas facing the world and to promote freedom and self-government by encouraging personal virtue and good character.”

Geithner: US has 'huge stake' in Euro crisis WASHINGTON (AFP) - US Treasury Secretary Timothy Geithner said Monday that America had a huge stake in helping Europe find a "more effective strategy" to tackle its financial crisis. Geithner, just back from a trip to Poland in which he reportedly expressed concern of a "catastrophic risk" to markets from the Greek debt crisis, said at the White House that Europe had the will to combat its challenges. "We have a huge stake as a country in helping them deal with those challenges. We have a huge economic stake, financial stake. "So we are working very closely with them and being very supportive and as they try to craft a more effective strategy. "Is there political will there?

US slams Iran at UN atomic agency meet VIENNA (AFP) - The United States took a renewed swipe at Iran Monday, telling the annual gathering of the UN atomic agency Tehran was creeping "still closer" to producing nuclear weapons-grade uranium. "Iran has continued to engage in a longstanding pattern of denial, deceit and evasion," US Energy Secretary Steven Chu told the 151-nation International Atomic Energy Association (IAEA) general conference in Vienna. He said a recent example of Iran's "provocative behaviour" was to begin installing facilities to enrich uranium, which can be used for nuclear power as well as atomic weapons, at an underground facility near Qom.

ANZ bluenotes 15 Feb 2021 Major projects pipeline: cracks appear Catherine Birch | Senior Economist, ANZ Although spending on major projects is expected to rise dramatically over the next few years, pandemic-related uncertainty could slow progress. 10 Feb 2021 Behind the ranks of the fintech revolution Day of Rage Protest Builds on Wall Street (Video) Activist Post 10-6 Things seem to have turned very ugly, as Alexander Higgins reports that Luke Rudkowski and other protesters were beaten with batons and pepper sprayed. The video below is part of a developing story and shows white shirt NYPD beating Occupy Wall Street Protestors behind a barricade with a baton. This is part of a developing story. Get the latest updates on today’s police brutality and see other videos of today’s beatings here. Prescription Drug Deaths Now Outnumber Traffic Fatalities in U.S. Anthony GucciardiActivist Post In 2009, drugs exceeded the amount of traffic-related deaths, killing at least 37,485 people nationwide. According to information provided by the U.S. Centers for Disease Control and Prevention, the very pharmaceuticals that are prescribed to treat life-endangering conditions are now ending lives. The death toll is partially due to an increase in mental illness medication known as psychotropics, which have been criticized by health experts as being oftentimes unnecessarily prescribed.

Yoga is Revolution Dylan HuntActivist Post As the world situation degrades further into oppression, war and wanton environmental destruction, we need as many tools as possible to protect our physical and spiritual health and well-being. Rather than being in poor shape, in a lousy mood and frightened by every uncertainty, one can use the time we have now to strengthen and purify the body, balance the emotions, and sharpen the mind for more effective decision making. Gold is a Good Investment in a Corrupt Matrix, But Self-Sufficiency is Real Wealth Julian RoseActivist Post The great rush to find a safe haven financial investment has led many supposedly savvy citizens to put their money into gold. This has caused the value of the precious metal to soar, reaching over $1,800 per ounce, giving investors a sense of security that their money is safe and likely to hold its value. However, in a world undergoing seismic social, economic, and environmental convulsions that are growing by the day, gold may not prove to be the solution to our future security that many are hoping for. If one stands back from the spinning vortex of speculative financial roulette that preoccupies the world's media and many of her better-off citizens, one will observe that unfortunately gold is inedible (some will say 'fortunately') and is less easy to turn into plough shears than other base metals.

EU Bonds Rollover Debt with a Chinese Bailout “It is an open secret that numerous European banks would not survive having to revalue sovereign debt held on the banking book at market levels.” Deutsche Bank CEO Josef Ackerman SARTRE, Contributing WriterActivist Post The financial press is inundated with the most ominous reports of an EU meltdown. The downturn in economic activity and little growth all comes down to the unsustainability in servicing the debt obligations. Are We Worthy of Freedom? Rick GedeonActivist Post Fact is, you cannot appease tyranny. Once people understand that the thirst of tyrants cannot be quenched, then people will begin to realize and appreciate the severity of their circumstance.

European Commission head calls NATO bombing of Libyans a “moral duty” Madison Ruppert, Contributing WriterActivist Post For weeks the mainstream media has been calling the uprising in Libya a success, despite any support for their position. Despite this false narrative, which included the capture of Tripoli from loyalists long before any such thing could be claimed, NATO is saying that they must continue to destroy what’s left of the Libyan infrastructure through their over-the-top bombing campaign. The NATO operation has resulted in countless civilian deaths in Libya, yet the head of the European Commission, Jose Manuel Barroso, characterized the mission as a “moral duty”. Is it NATO’s “moral duty” to support non-democratically elected, terrorist-linked rebels to the detriment of the people of Libya, even if it means they will die in the process? If you ask Barroso, then yes, it is definitely NATO’s duty.