Habile Technologies. Tim Jones posted on LinkedIn. The meeting that showed me the truth about VCs. Tomer Dean is a serial tech entrepreneur currently based in Tel Aviv. 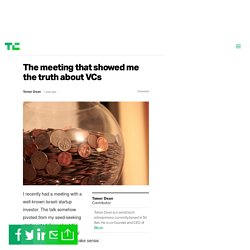 He is co-founder and CEO of Bllush. I recently had a meeting with a well-known Israeli startup investor. The talk somehow pivoted from my seed-seeking startup into talking about the macro view of venture capital and how it doesn’t actually make sense. “Ninety-five percent of VCs aren’t profitable,” he said. It took me a while to understand what this really means. I’ll clarify: Ninety-five percent of VCs aren’t actually returning enough money to justify the risk, fees and illiquidity their investors (LPs) are taking on by investing in their funds. Who’s actually succeeding in making money? Meet the online lenders saving Aussies millions. Blockchain and how it will change everything. Cancer.

Financial & Business Models. Mercialisation Australia grants on hold: Where the $200 million+ has gone. The federal government’s venture capital organisation is on hold, with the Department of Industry announcing applications will not be accepted or processed until after the May 2014 budget. 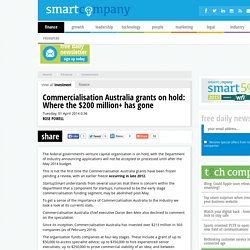 Since its inception, Commercialisation Australia has invested over $213 million in 503 companies (as of February 2014). The organisation funds companies at four key stages. Business Proposal Template - Download Free Forms & Samples for PDF, Word, Excel. Insider traders using smartphone apps like Wickr tough to stop, admits ASIC. Gemtree Wines. Gemtree Wines was established in 1998 as an extension to the Buttery family’s grape growing business, which had supplied grapes to wineries in South Australia’s McLaren Vale district since 1980. 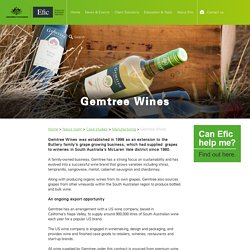 A family-owned business, Gemtree has a strong focus on sustainability and has evolved into a successful wine brand that grows varieties including shiraz, tempranillo, sangiovese, merlot, cabernet sauvignon and chardonnay. Along with producing organic wines from its own grapes, Gemtree also sources grapes from other vineyards within the South Australian region to produce bottled and bulk wine. An ongoing export opportunity Gemtree has an arrangement with a US wine company, based in California’s Napa Valley, to supply around 900,000 litres of South Australian wine each year for a popular US brand. The US wine company is engaged in winemaking, design and packaging, and provides wine and finished case goods to retailers, wineries, restaurants and start-up brands. Gemtree Wines. Holy smokes! Actress Jessica Alba talks about how she built a $1 billion business empire in four years. 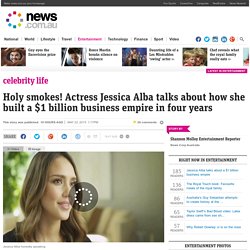 David Koch shares his top five tips David Koch explains how to flick the switch on big electricity bills With online shopping now a part of everyday life here's what you need to know The new Tic Tac Mixers will come in two flavors. The best way to dress for this Spring weather is to layer up with lightweight jackets. Leaner Investec looks to fatten up on property and planes. Daily Cash Report - Strategic CFO. Retail Store Revenue Projection « Plan Projections. The retail store revenue projection template provides a quick and easy method to estimate revenue generated by a retail store business for the next 5 years. 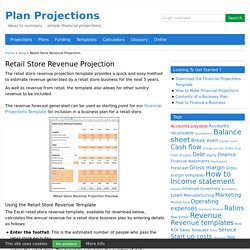 As well as revenue from retail, the template also allows for other sundry revenue to be included. The Mobile Message Platform > Benefits. Sell, Sell, Sell Mobile sales pages that convert Lets face it, who doesn't want to sell more? 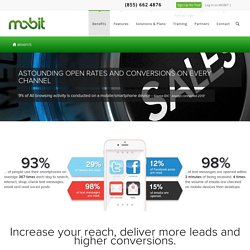 Your MOBIT messages and sales campaigns can reach the widest possible audience, engage, capture their response, which then enables you to close the sale right there and then on their mobile device or nurture them through followup campaigns with mobile messaging, email, and other channels. Quickly and easily promote your sales events and business promotions with our awesome sales pages that convert on the channel most widely read, mobile! Market Trend Signal - does it work? Untitled. Real Estate Crowdfunding - Realty Mogul. Crowdfunding Australia. Australia does drag behind the rest of the world when it comes to crowdfunding but there are some options. 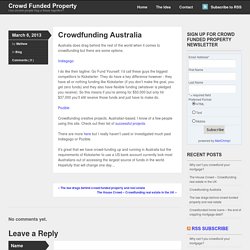 Indiegogo I do like their tagline: Go Fund Yourself. I’d call these guys the biggest competitors to Kickstarter. They do have a key difference however - they have all or nothing funding like Kickstarter (if you don’t make the goal, you get zero funds) and they also have flexible funding (whatever is pledged you receive). So this means if you’re aiming for $50,000 but only hit $37,000 you’ll still receive those funds and just have to make do. Pozible Crowdfunding creative projects. DealMarket - The Global Private Equity Marketplace.