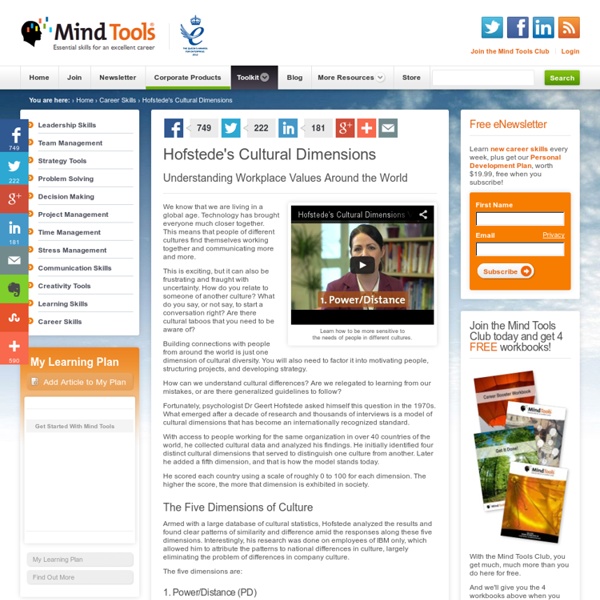 Understanding Workplace Values Around the World Learn how to be more sensitive to the needs of people in different cultures. We know that we are living in a global age. Technology has brought everyone much closer together. This means that people of different cultures find themselves working together and communicating more and more. This is exciting, but it can also be frustrating and fraught with uncertainty. Building connections with people from around the world is just one dimension of cultural diversity. How can we understand cultural differences? Fortunately, psychologist Dr Geert Hofstede asked himself this question in the 1970s. With access to people working for the same organization in over 40 countries of the world, he collected cultural data and analyzed his findings. He scored each country using a scale of roughly 0 to 100 for each dimension. The Five Dimensions of Culture The five dimensions are: 1. 2. 3. 4. 5. Note: Hofstede's analysis is done by country. Key Points

Hofstede's consequences: The impact of his work on consulting and business practices An Executive Commentary by John W. Bing Encountering Hofstede's Work The ocean liner Queen Mary is perhaps an odd place to run into the ideas of Geert Hofstede, but that is where I first encountered them, in March of 1982 at a conference of the Society for Intercultural Training, Education and Research (SIETAR). (The Queen Mary is now, and was then, a floating convention center docked off the coast of Southern California.) Hofstede's cultural dimensions theory Overview[edit] Hofstede's cultural dimensions theory is a framework for cross-cultural communication. Hofstede developed his original model as a result of using factor analysis to examine the results of a world-wide survey of employee values by IBM in the 1960s and 1970s. The theory was one of the first that could be quantified, and could be used to explain observed differences between cultures.

Organisational Culture The research of Geert Hofstede has shown that cultural differences between nations are particularly found at the deepest level, the level of values. In comparison, cultural differences among organisations are principally identified at the level of practices. Practices are more tangible than values. Organisational Culture can be defined as "the collective programming of the mind that distinguishes the members of one organisation from others." The Organisational Cultural model, further developed by Bob Waisfisz in collaboration with Geert Hofstede, consists of six autonomous dimensions (variables) and two semi-autonomous dimensions.

Countries Please select a country in the dropdown menu above to see the values for the 6 dimensions. After a first country has been selected, a second and even a third country can be chosen to be able to see a comparison of their scores. To compare your personal preferences to the scores of a country of your choice, please purchase our cultural survey tool, the Culture Compass™. Please note that culture is defined as the collective mental programming of the human mind which distinguishes one group of people from another. This programming influences patterns of thinking which are reflected in the meaning people attach to various aspects of life and which become crystallised in the institutions of a society. This does not imply that everyone in a given society is programmed in the same way; there are considerable differences between individuals.

Intercultural competence A theoretical construct for cross-cultural competence, language proficiency, and regional expertise. Intercultural competence is the ability to communicate effectively and appropriately with people of other cultures:[1] Appropriately. Valued rules, norms, and expectations of the relationship are not violated significantly.Effectively. National Culture About the research Professor Geert Hofstede conducted one of the most comprehensive studies of how values in the workplace are influenced by culture. He analysed a large database of employee value scores collected within IBM between 1967 and 1973. The data covered more than 70 countries, from which Hofstede first used the 40 countries with the largest groups of respondents and afterwards extended the analysis to 50 countries and 3 regions. Subsequent studies validating the earlier results include such respondent groups as commercial airline pilots and students in 23 countries, civil service managers in 14 counties, 'up-market' consumers in 15 countries and 'elites' in 19 countries. In the 2010 edition of the book Cultures and Organizations: Software of the Mind, scores on the dimensions are listed for 76 countries, partly based on replications and extensions of the IBM study on different international populations and by different scholars.