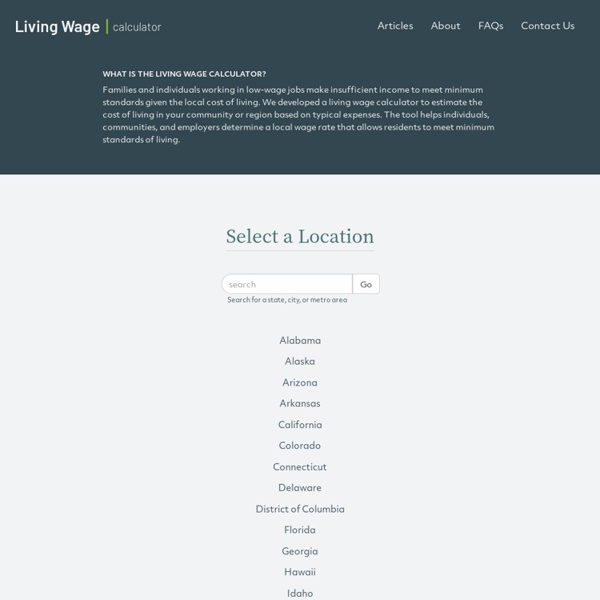 In many American communities, families working in low-wage jobs make insufficient income to live locally given the local cost of living. Recently, in a number of high-cost communities, community organizers and citizens have successfully argued that the prevailing wage offered by the public sector and key businesses should reflect a wage rate required to meet minimum standards of living. Therefore we have developed a living wage calculator to estimate the cost of living in your community or region. The calculator lists typical expenses, the living wage and typical wages for the selected location. Select a Location To get started, enter a location into the search box above, or browse to a location using the list below.

Experts discuss new trend of eating out vs. eating at home It happened this year for the first time ever: Americans spent more money in restaurants and bars than in grocery stores, according to a recent article published by Yahoo! News. In April the U.S. Department of Commerce reported that Americans spent $52.3 billion at restaurants and bars in March, and $49.7 billion in grocery stores. Cheapskate Guide: 50 Tips For Frugal Living Post written by Leo Babauta. Follow me on Twitter. Confession time: I’m a cheapskate. Some would say frugal, which sounds much more positive, but in reality I can be a real cheapskate. I am fairly frugal (though not always), but sometimes I take it too far: I have T-shirts with holes in them, I never buy new clothes, we’re shopping for a new couch because our current one has holes in it, and I ran my current pair of running shoes until the soles fell off.

Does Globalization Lower Wages and Export Jobs? Does Globalization Lower Wagesand Export Jobs? Matthew J. Slaughter and Phillip Swagel ©1997 International Monetary Fund September 1997 PDF File (112k) also available. Use the free Adobe Acrobat Reader to view pdf files. House Approves Derivatives Deregulation Bills That Would Open More Loopholes For Wall Street WASHINGTON -- The U.S. House of Representatives passed a slate of bills Wednesday intended to roll back recent financial reforms and deregulate derivatives, the complex financial products at the heart of the 2008 financial crisis. The legislation aimed at the 2010 overhaul of financial regulation known as Dodd-Frank cleared with broad bipartisan backing. One bill passed despite strenuous objections from the White House, leading regulators and senior lawmakers such as Maxine Waters (D-Calif), the top Democrat on the House Financial Services Committee. Nearly two-thirds of House Democrats opposed that measure, which aims to curb U.S. supervision of overseas activities by U.S. banks, even though nearly two-thirds of Democrats on the banking committee voted for it last month.

Sample Average Monthly Budget For a Single Person Or College Student Not long ago I wrote on how to make a budget plan. If you really want a detailed look at how to set up a reasonable budget for yourself then take a look there. If you are learning to budget or just want some easy to follow numbers though then I’ll try to break it down in this post. Since I don’t know your specific situation I’m going to use some very broad assumptions. Frugal Tips - Saving Money Tips “When the Japanese mend broken objects, they aggrandize the damage by filling the cracks with gold. They believe that when something’s suffered damage and has a history, it becomes more beautiful.” -Barbara Bloom You know what one of my favorite things in my house is?

The long slow make This weekend, World Maker Faire opens at the NY Hall of Science in Queens, our second annual event. Last year, I ran into Anil Dash at World Maker Faire and had a short conversation with him. Afterwards, he wrote a wonderful article, “Make the Revolution“. Rich Entrepreneur: The Wealthy Aren’t Job Creators, Middle Class Workers Are By Bryce Covert "Rich Entrepreneur: The Wealthy Aren’t Job Creators, Middle-Class Workers Are" Nick Hanauer On Thursday, entrepreneur and self-described one percenter Nick Hanauer warned Congress that rich people like him aren’t the engines of the economy. In a testimony before the Senate Banking Committee, he explained why, in fact, middle-class workers are the economy’s real job creators: In the same way that it’s a fact that the sun, not earth is the center of the solar system, it’s also a fact that the middle class, not rich business people like me are the center of America’s economy. […]As an entrepreneur and investor, I have started or helped start, dozens of businesses and initially hired lots of people.

Financial Simulations for Young Adults: Making the "Real World" Real Introduction Simulations are a useful tool for teaching personal finance concepts. With realistic information about hypothetical individuals or households, including salaries, educational attainment, marital status, and household expenses, simulations provide an opportunity for students to appreciate the economic impact of a post-secondary education and to practice financial management skills such as check writing and budgeting. In addition, simulations are interactive, which makes learning fun and help develop participants' interpersonal and teamwork skills. Educators serve as facilitators of the learning process (e.g., posing debriefing questions) rather than in the traditional lecture presentation role.

The Flight of the Pringle - Past News Tom Lange knows more about flying Pringles than probably anyone alive. As director of modeling and simulation at Procter & Gamble Co., it's Lange's job to use finite element analysis to predict what something will smell like, whether a bottle will break, and if a Pringles chip will take flight. "We break things into a million little parts and then write simple math equations about how each little part affects the other parts," says Lange, who is responsible for the economic, as well as structural, analysis of different materials. Supreme Court limits workers' discrimination, retaliation suits Loading... April 22, 2014 Sign in Sign Out Create an Account Subscribe

14 key considerations for when filing bankruptcy By Dana Dratch No one ever plans to go bankrupt. It's like pushing a financial reset button. Interactive The World of Seven Billion The map shows population density; the brightest points are the highest densities. Each country is colored according to its average annual gross national income per capita, using categories established by the World Bank (see key below). Some nations— like economic powerhouses China and India—have an especially wide range of incomes. But as the two most populous countries, both are lower middle class when income is averaged per capita.