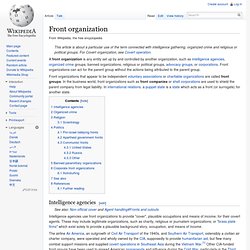 Front organizations can act for the parent group without the actions being attributed to the parent group. Intelligence agencies[edit] Intelligence agencies use front organizations to provide "cover", plausible occupations and means of income, for their covert agents. Gatekeeping (communication) Gatekeeping is the process through which information is filtered for dissemination, whether for publication, broadcasting, the Internet, or some other mode of communication. 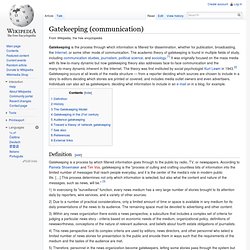 The academic theory of gatekeeping is found in multiple fields of study, including communication studies, journalism, political science, and sociology.[1] It was originally focused on the mass media with its few-to-many dynamic but now gatekeeping theory also addresses face-to-face communication and the many-to-many dynamic inherent in the Internet. The theory was first instituted by social psychologist Kurt Lewin in 1943.[2] Gatekeeping occurs at all levels of the media structure — from a reporter deciding which sources are chosen to include in a story to editors deciding which stories are printed or covered, and includes media outlet owners and even advertisers.

Conformity. Impression management. In sociology and social psychology, impression management is a goal-directed conscious or unconscious process in which people attempt to influence the perceptions of other people about a person, object or event; they do so by regulating and controlling information in social interaction (Piwinger & Ebert 2001, pp. 1–2). 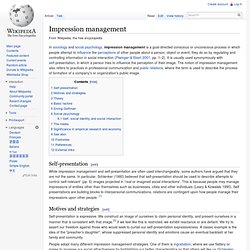 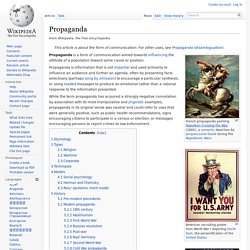 While the term propaganda has acquired a strongly negative connotation by association with its most manipulative and jingoistic examples, propaganda in its original sense was neutral and could refer to uses that were generally positive, such as public health recommendations, signs encouraging citizens to participate in a census or election, or messages encouraging persons to report crimes to law enforcement. Etymology[edit] From the 1790s, the term began being used also for propaganda in secular activities.[2] The term began taking a pejorative connotation in the mid-19th century, when it was used in the political sphere.[2] Types[edit] Defining propaganda has always been a problem. According to historian Zbyněk Zeman, propaganda is defined as either white, grey or black.

US Office for War Information poster implying that working less helped the Axis powers. Social influence. Morton Deutsch and Harold Gerard described two psychological needs that lead humans to conform to the expectations of others. 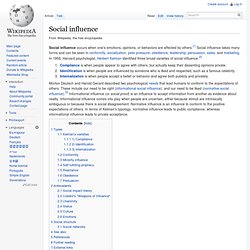 Herd behavior. Herd behavior describes how individuals in a group can act together without planned direction. 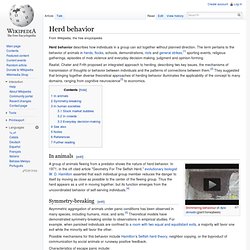 The term pertains to the behavior of animals in herds, flocks, schools, demonstrations, riots and general strikes,[1] sporting events, religious gatherings, episodes of mob violence and everyday decision-making, judgment and opinion-forming. Raafat, Chater and Frith proposed an integrated approach to herding, describing two key issues, the mechanisms of transmission of thoughts or behavior between individuals and the patterns of connections between them.[2] They suggested that bringing together diverse theoretical approaches of herding behavior illuminates the applicability of the concept to many domains, ranging from cognitive neuroscience[3] to economics.

In animals[edit] A group of animals fleeing from a predator shows the nature of herd behavior. In 1971, in the oft cited article "Geometry For The Selfish Herd," evolutionary biologist W. Crowd manipulation. Crowd manipulation is the intentional use of techniques based on the principles of crowd psychology to engage, control, or influence the desires of a crowd in order to direct its behavior toward a specific action.[1] This practice is common to politics and business and can facilitate the approval or disapproval or indifference to a person, policy, or product. 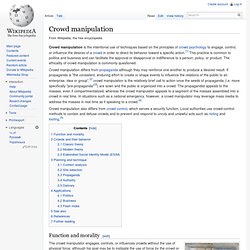 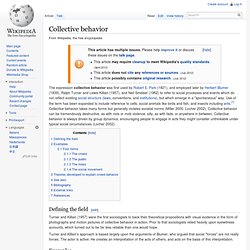 Park (1921), and employed later by Herbert Blumer (1939), Ralph Turner and Lewis Killian (1957), and Neil Smelser (1962) to refer to social processes and events which do not reflect existing social structure (laws, conventions, and institutions), but which emerge in a "spontaneous" way.