Wave power. Wave power is the transport of energy by ocean surface waves, and the capture of that energy to do useful work – for example, electricity generation, water desalination, or the pumping of water (into reservoirs). 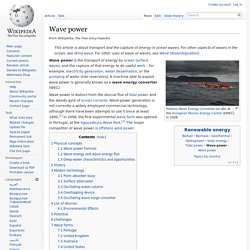 A machine able to exploit wave power is generally known as a wave energy converter (WEC). Wave power is distinct from the diurnal flux of tidal power and the steady gyre of ocean currents. Wave-power generation is not currently a widely employed commercial technology, although there have been attempts to use it since at least 1890.[1] In 2008, the first experimental wave farm was opened in Portugal, at the Aguçadoura Wave Park.[2] The major competitor of wave power is offshore wind power. Physical concepts[edit] When an object bobs up and down on a ripple in a pond, it experiences an elliptical trajectory. 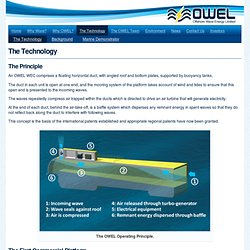 The duct in each unit is open at one end, and the mooring system of the platform takes account of wind and tides to ensure that this open end is presented to the incoming waves. The waves repeatedly compress air trapped within the ducts which is directed to drive an air turbine that will generate electricity. At the end of each duct, behind the air-take-off, is a baffle system which disperses any remnant energy in spent waves so that they do not reflect back along the duct to interfere with following waves. This concept is the basis of the international patents established and appropriate regional patents have now been granted. The OWEL Operating Principle. The First Commercial Platform 2MW Platform Triple ductRated power – 2MWOverall length – 70mInlet width – 22mDraft – 8mPower for over 1,200 homes. The Tesla Valve: One Way Flow With No Moving Parts. Here’s yet another delightful mechanical curiosity from among Nikola Tesla’s 278 known patents. 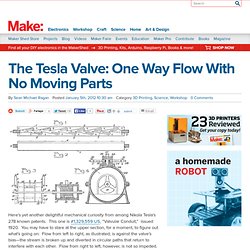 This one is #1,329,559 US, “Valvular Conduit,” issued 1920. You may have to stare at the upper section, for a moment, to figure out what’s going on: Flow from left to right, as illustrated, is against the valve’s bias—the stream is broken up and diverted in circular paths that return to interfere with each other. Flow from right to left, however, is not so impeded. These are images of a laser-sintered nylon Tesla valve by Shapeways user imperator, who is also, I believe, the narrator in this video from YouTuber LimitlessInd. It includes a brief demonstration of the conduit’s operation in both directions (using a stream of air from the narrator’s mouth), but I for one would love to see a demo using a visible fluid. Boston Thingiverse user Brendan Chenelle has posted a 3D model. Related. 3D Printed Tesla Valve. Tesla Valve by toehead. Neumática e hidráulica. A continuación se representan algunas aplicaciones básicas que ayudarán a entender los circuitos neumáticos. 1.- Control de un cilindro de simple efecto. 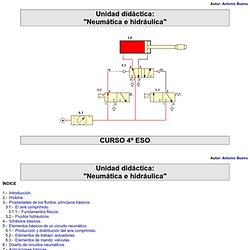 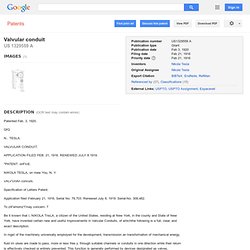 "PATENT. onFIcE. NIKOLA TESLA, on mew You, N. Y. vALv'UnAn concurs. Specification of Letters Patent. Application filed Ii'ebruary 21, 1916, Serial No. 79,703. To zill'whomz't'may concern: 7 Be it known that I, NIKOLA TnsLA, a citizen of the United States, residing at New York, in the county and State of New York, have invented certain new and useful Improvements in Valvular Conduits, of whichthe following is a full, clear, and exact description.

In mgst of the machinery universally emploiyed for the development, transmission an transformation of mechanical energy, fluid im ulses are made to pass, more or less free y, through suitable channels or conduits in one direction while their return is effectively checked or entirely prevented. And which it is the object of this app 'cation describe, v .' expressed, the advance I have Briefi achieved consists inthe employment of a peculiar channel or conduit charactized by valvular action.