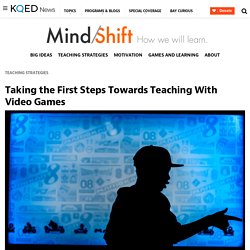 If teachers use books, music, videos and websites as resources for teaching, video games should also be included on that list, according to Nordahl Grieg teacher Tobias Staaby. He and his colleagues, including Aleksander Husøy, have been demonstrating the uses of video games to educators by inviting them to a workshop at the school each semester. Staaby says it helps to take a look at who plays games. According to the Entertainment Software Association, which represents the video game industry, the average age of a video game player in the U.S. is 35 years old, which can be closer to the age of a teacher than a student.

Staaby and Husøy were at the Games Learning Society conference in Wisconsin earlier this month to talk about how they use video games in the classroom. Play! G4C15 Mini-Talk: Building Games for Schools. Learning Game Market Continues Strong Growth; Questions Remain. As the Serious Play Conference continues in Pittsburgh, there have been a couple of new reports out about the projected growth of and investment in the learning games market that are worth noting. 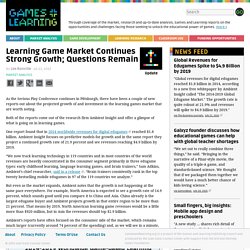 Both of the reports come out of the research firm Ambient Insight and offer a glimpse of what is going on in learning games. One report found that in 2014 worldwide revenues for digital edugames reached $1.8 billion. Ambient Insight focuses on predictive models for growth and in the same report they project a continued growth rate of 21.9 percent and see revenues reaching $4.9 billion by 2019. Michelle Frederick sur Twitter : "Do your company's leaders know the difference between Gamification vs Game-Based eLearning? Do you? You should! Stephen Reid sur Twitter : "#Landfill or a #Recycling centre? Students build, use and reflect on both in #Minecraft. #Sustainability #edchat #gbl. Paul Darvasi sur Twitter : "Somebody stole daddy's copy of "The Game Believes in You". She particularly liked Chp 7. @gtoppo @PeggySheehy #gbl. Why Minecraft Rewrites the Playbook for Learning. One of the world's leading experts in online education sings the praises of Minecraft as a tool for helping kids find and realize a passion for learning You know that Minecraft is massive. 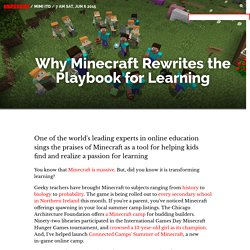 But, did you know it is transforming learning? Geeky teachers have brought Minecraft to subjects ranging from history to biology to probability. When you talk too much for Twitter. UW-Madison's Games Learning Society conference explores gaming in the classroom. With the technology boom over the past decade, more teachers across the nation are taking a digital approach to their lesson plans. 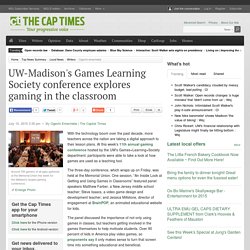 At this week's 11th annual gaming conference hosted by the UW's Games+Learning+Society department, participants were able to take a look at how games are used as a teaching tool. The three-day conference, which wraps up on Friday, was held at the Memorial Union. One session, “An Inside Look at Getting and Using Games in Classrooms” featured panel speakers Matthew Farber, a New Jersey middle school teacher; Steve Isaacs, a video game design and development teacher; and Jessica Millstone, director of engagement at BrainPOP, an animated educational website for kids.

The panel discussed the importance of not only using games in classes, but teachers getting involved in the games themselves to help motivate students. Trish Cloud sur Twitter : "@nathan_stevens @iluveducating this is what the care bears in our guild look like. #gbl... Gsnetworkalive. Less than 3 Weeks until 2015 ISTE Conference in Philly We are just a little shy of four more weeks until the conference! 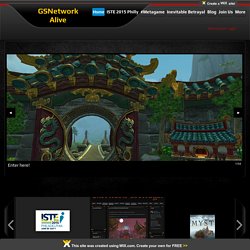 Do you have your schedule set? Do you have your travel plans? But most important, are you wondering how you can get more involved and help volunteer for Games and Sims? Ok maybe it is not the most important of those questions, but we still have great opportunities for our members to get involved at the conference. We have openings at the Playgrounds, Machinima Fest, LAN Party and more. SETDA partners with 9 hot ed-tech startups. Startups focus on serving K-12 educational needs The State Educational Technology Directors Association (SETDA), which represents U.S. state and territorial educational technology leaders, recently announced its third annual cohort of Emerging Private Sector Partners. 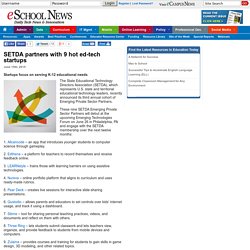 These nine SETDA Emerging Private Sector Partners will debut at the upcoming Emerging Technologies Forum on June 26 in Philadelphia, PA and engage with the SETDA membership over the next twelve months: 1. Allcancode – an app that introduces younger students to computer science through gameplay. 2. 3. The Rise of the ‘Gaming for Good’ Movement. Camilla Gagliolo watches as children in William Donovan's fourth-grade class study a Virginia history lesson on iPads at Jamestown Elementary School in Arlington, Virginia on March 13, 2012. 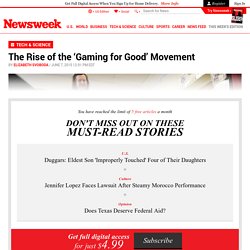 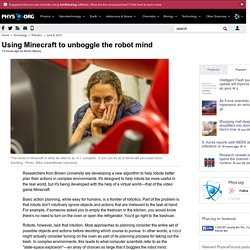 It's designed to help robots be more useful in the real world, but it's being developed with the help of a virtual world—that of the video game Minecraft. Basic action planning, while easy for humans, is a frontier of robotics. Part of the problem is that robots don't intuitively ignore objects and actions that are irrelevant to the task at hand. For example, if someone asked you to empty the trashcan in the kitchen, you would know there's no need to turn on the oven or open the refrigerator. How Video Games Make You Work. My virtual employment history lacks, some might say, a certain focus. 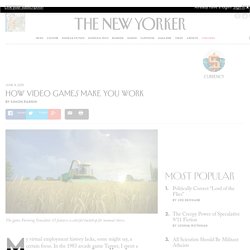 In the 1983 arcade game Tapper, I spent a summer as a bartender, sliding jugs of Budweiser with showboating precision along polished tables, to the delight of patrons. Paperboy, from 1985, had me bicycling up and down a suburban street, hurling newspapers into the mailboxes of subscribers, and taking the odd moment to vandalize the home of any non-subscriber. (The print industry’s decline commenced, I maintain, with my retirement from that gig.) SimCity, from 1989, landed me a role as a municipal planner, arranging the layouts of streets, placing electrical lines and sewage plants, and rolling with the odd natural disaster.

Crazy Taxi (1999) put me behind the wheel of a low-slung cab, streaking through major cities to deliver passengers to their implausibly urgent appointments at Pizza Hut or Tower Records. 2015 Machinima Fest. Exploding Myths About Learning Through Gaming. Part of our series of conversations with leading teachers, writers and activists on education issues. 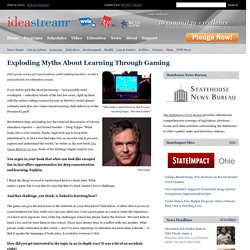 If you had to pick the most promising — and possibly most overhyped — education trends of the last few years, right up there with the online college courses known as MOOCs would almost certainly rank this one: Game-based learning shall deliver us to the Promised Land! But between hype and hating lies the nuanced discoveries of veteran education reporter — and former teacher — Greg Toppo. "What looks like a 21st-century, flashy, high-tech way to keep kids entertained is in fact a tool that taps into an ancient way to process, explore and understand the world," he writes in his new book The Game Believes In You. Department of Education Believes Video Games are the Future of Learning - GameSpot. Kids are playing more video games than ever these days. At least according to data from the US Department of Education.

That might be cause for some to worry about the intellectual future of the next generation, but Erik Martin disagrees. Game-Based Learning #gbl. The above video shows an example of how my 6th graders are playing World of Warcraft during the WoWinSchools course I am teaching this year. New Minecraft Mod Teaches You Code as You Play. MindShift sur Twitter : "Bypassing the Textbook: Video Games Transform Social Studies Curriculcum #gbl #sschat #edtech.

Bypassing the Textbook: Video Games Transform Social Studies Curriculcum. Digital Tools Skyrim Elder Scrolls trailer Educators typically think of using digital and video games as the actual learning tool, but one teacher is using video games for something else entirely — as a replacement for the textbook. Jeff Mummert, a social studies teacher and department chair at Hershey High School in Pennsylvania, uses games in his class to get students thinking critically about the subject matter the games address, even if they’re completely imaginary, he said. Game designers put a lot of time and thought into developing aesthetically appealing games that they think will draw players into an imaginary world. Mummert says his interest in games in the classroom focuses entirely on asking students to think critically about the game in the same way they would analyze a text or work of art.

Since many of his students already play video games at home, Mummert prefers to use those games as discussion points. Your Thoughts: What Makes A Game Good? 6 Minecraft lesson ideas for your Common Core math class. Jim Pike December 1st, 2014 From graphing paper to algebra puzzles, one teacher shares tons of practical lesson ideas for turning math class into “Mathcraft” Last year I taught third-grade math in a whole new way. Combining elements from the wildly popular sandbox game Minecraft, I had students thinking visually and creatively about mathematical models and theories that went way beyond a typical third-grade curriculum, transforming math class into what I like to call Mathcraft. Sites.google. 1) Why not Minecraft? While Minecraft has an extremely rich metagame with tutorials, Let's Play (LP) videos and lots of modding, we wanted to choose a Massively Online Game that had novels associated with it.

We'll do Minecraft as a supplement in one of 2015 book clubs. 2) Why not choose another game like SWTOR ( Star Wars The Old Republic) or Lord of the Rings? Plus.google. #Metagame Book Club Rise of the Horde Introduction. More Connected Educator Month #ce14. Trish Cloud sur Twitter : "For Pigs and Glory! New @Minecraft hoodie so much awesome @MinecraftEdu #gbl... Using Minecraft in School Tweetchat @Gmsimnetwork 10/15/14 #gbl (with image, tweets) · trishcloud.