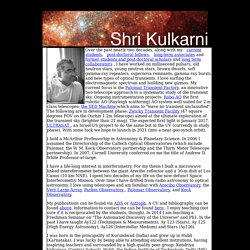 I love surfing the electromagnetic spectrum and building new gizmos. My current focus is the Palomar Transient Factory, an innovative two-telescope approach to a systematic study of the transient sky. Ongoing instrumentation projects: Robo-AO the first robotic AO (Rayleigh scattering) AO system well suited for 2-m class telescopes; the SED Machine which aims to "leave no transient unclassified". The following are in development phase: Zwicky Transient Facility (47 square degrees FOV on the Oschin 1.2m telescope) aimed at the ultimate exploration of the transient sky (brighter than 21 mag). 'Playing Around With Telescopes' To Explore Secrets Of The Universe - He raises bunny rabbits. The 200-inch Hale Telescope, a masterpiece of engineering at Caltech's Palomar Observatory, was the world's largest telescope until 1993. 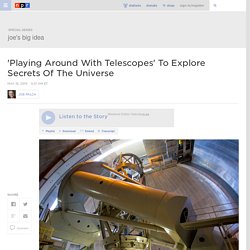 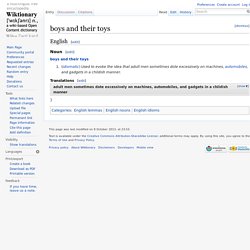 By Kate Clancy: Girls with toys on Twitter: Feminist hashtag shares images of women doing science. Photo by Thinkstock On Saturday morning, I turned on NPR while I made breakfast for my daughter and me. 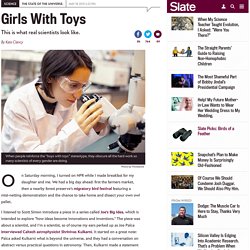 We had a big day ahead: first the farmers market, then a nearby forest preserve’s migratory bird festival featuring a mist-netting demonstration and the chance to take home and dissect your own owl pellet. I listened to Scott Simon introduce a piece in a series called Joe’s Big Idea, which is intended to explore “how ideas become innovations and inventions.” The piece was about a scientist, and I’m a scientist, so of course my ears perked up as Joe Palca interviewed Caltech astrophysicist Shrinivas Kulkarni.

It started on a great note: Palca asked Kulkarni what is beyond the universe, and they had a conversation on abstract versus practical questions in astronomy. Women around the world prove science isn't just for 'boys with toys' Female scientists have joined together to disprove one astronomer's thesis: science is just "boys with toys. 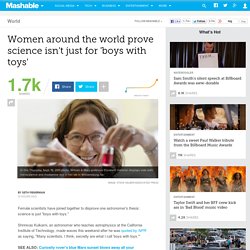 " Shrinivas Kulkarni, an astronomer who teaches astrophysics at the California Institute of Technology, made waves this weekend after he was quoted by NPR as saying, "Many scientists, I think, secretly are what I call 'boys with toys.'" That casual remark, included in an otherwise unremarkable interview, quickly set off a powerful reaction from women (and men) in the science community who took to Twitter to highlight how tone deaf it is to continue talking as though women have no role in the field. Using the hashtag #girlswithtoys, scientists from around the world shared dozens of images of women "playing" with microscopes, telescopes, Mars rovers, water pumps and more. #girlswithtoys: women remind Twitter they are scientists too. Female scientists from all over the world have taken to Twitter to post pictures of themselves with tools and equipment from their workplaces alongside the hashtag #girlswithtoys. 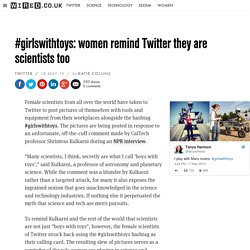 The pictures are being posted in response to an unfortunate, off-the-cuff comment made by CalTech professor Shrinivas Kulkarni during an NPR interview. "Many scientists, I think, secretly are what I call 'boys with toys'," said Kulkarni, a professor of astronomy and planetary science. While the comment was a blunder by Kulkarni rather than a targeted attack, for many it also exposes the ingrained sexism that goes unacknowledged in the science and technology industries. If nothing else it perpetuated the myth that science and tech are men's pursuits. To remind Kulkarni and the rest of the world that scientists are not just "boys with toys", however, the female scientists of Twitter struck back using the #girlswithtoys hashtag as their calling card. Frauen in der Wissenschaft: Mein Teleskop, mein Mars-Rover, mein Lieblingsmessgerät. An Astronomer Called Scientists "Boys With Toys" And This Is How Twitter Reacted. Powerful #GirlsWithToys Campaign Proves Once And For All That Women Have A Place In STEM.

Science isn't just 'boys with toys,' and these 'girls' can prove it. In a recent interview, male astronomer Shrinivas Kulkarni said that many scientists are just "boys with toys. 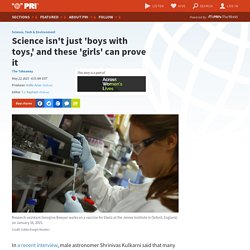 " So women in STEM fields took to Twitter to prove him wrong. Using the hashtag #GirlsWithToys, female scientists and engineers posted over 17,000 images of themselves at work, surrounded by the “toys” they use every day — everything from space shuttles and telescopes to robots and microscopes. “‘Boys with toys’ sounds great, and there are lots of boys with lots of great toys,” says Dawn Sumner, chair of the earth and planetary sciences department at the University of California. “But as a woman scientist and someone who really encourages women to go into science and engineering, there are also girls with toys. We are just as excited as anyone else to play with these amazing tools.”

And Sumner has definitely earned her own spot within the #GirlsWithToys movement. When it comes to the hashtag, Sumner says #GirlsWithToys represents something bigger within the STEM world. Gender-al science. Still from Ender’s Game. 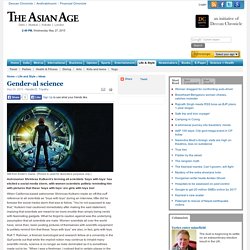 “You’re not supposed to say that,” Kulkarni had cautioned immediately after making the said statement, implying that scientists are meant to be more erudite than simply being nerds with fascinating gadgets. What he forgot to caution against was the underlying assumption that all scientists are male. Rafi T. She goes on, “This is another reason why I found this astronomer’s statement so ridiculous. Astronomer calls scientists ‘boys with toys,’ #girlswithtoys proves him wrong. NPR ran an interview with astronomer and Cal Tech professor Shrinivas Kulkarni yesterday, and overall it's relatively mild. 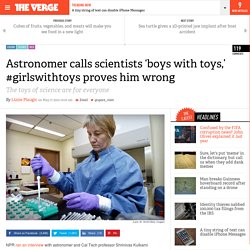 But less than two minutes in, Kulkarni manages to say something dumb: "Many scientists, I think, secretly are what I call 'boys with toys'. " It's one of those quotes that makes you cringe and roll your eyes simultaneously. Even NPR's Joe Palca cautiously repeats the phrase back to Kulkarni. Twice. Science women celebrate 'toys' after radio show comment. An NPR story about astronomers being “boys with toys” triggered a Twitter-storm response from women in astronomy and other sciences this week. 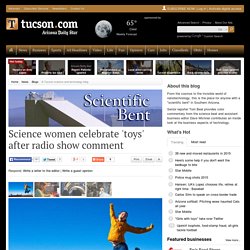 But one thing helps: The more women taking college-level or higher classes in a country, the weaker those stereotypic associations are among the country's citizens. The results suggest that people need to see repeated examples of women in science to whittle away at their unconscious stereotypes, the study's authors write in their paper, which will appear in the Journal of Educational Psychology this fall. Girls with toys: les filles ont aussi droit à leurs jouets (scientifiques) Astronoom begaat de vergissing van zijn leven. Astronomer's 'boys with toys' remark inspires #GirlsWithToys response.

A male astronomer’s offhand comment during an interview prompted a social media outcry over the weekend when female scientists around the world took to Twitter using the hashtag #GirlsWithToys. “Many scientists, I think, secretly are what I call ‘boys with toys’,” Shrinivas Kulkarni, a Caltech professor of astronomy and planetary science, said in a profile that aired on Saturday’s episode of NPR’s Weekend Edition. Although Kulkarni did not intend to undermine women’s contributions to the sciences, it came at a time when multiple organizations and initiatives are promoting the engagement of women in science, technology, engineering and mathematics fields — also known as STEM — and encourage more girls to pursue careers in science and math. A recent study by the American Association of University Women found that men outnumber women in nearly every STEM field, with women earning as few as 20 percent of bachelor’s degrees in fields like physics, engineering and computer science.

Theconversation. I was initially rather excited to see that one of my friends and collaborators, Professor Shri Kulkarni from Caltech, had his picture littering my Facebook feed recently. Unfortunately for Shri, it was because in an interview with National Public Radio he had described many scientists as secretly being “boys with toys”. Worse, he had said “You’re not supposed to say that”, which indicated that although it might be controversial, he said it anyway – which is typical of Shri. Eredoctoraat voor astronoom Shrinivas Kulkarni. Ter gelegenheid van de 92e dies natalis, de verjaardag van de universiteit, reikt de Radboud Universiteit op donderdag 28 mei 2015 een eredoctoraat uit aan astronoom Shrinivas Kulkarni. Hij is McArthur professor of Astronomy and Planetary Sciences aan het California Institute of Technology (Caltech), directeur van het bijbehorende observatorium en auteur van 67 publicaties in Nature.

Honorary Doctorate for astronomer Shrinivas Kulkarni - Faculty of Science. On Thursday 28 May, Shrinivas Kulkarni, professor of Astronomy and Planetary Sciences at the California Institute of Technology (Caltech), will receive an honorary doctorate from Radboud University on the occasion of its 92nd anniversary. In addition to his McArthur Professorhip in Astronomy & Planetary Science, professor Kulkarni is director of the Caltech Optical Observatories.