Targets - Print your own fun game shooting targets. Biomes Worksheets. Guess Who: Doctor Who Edition. A few months ago I had an idea – what if there was a Doctor Who version of the classic game Guess Who? 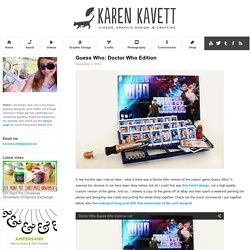 It seemed too obvious to not have been done before, but all I could find was this t-shirt design, not a high-quality custom version of the game. And so, I ordered a copy of the game off of eBay and then spent a weekend painting the pieces and designing new cards and putting the whole thing together. Check out the mock commercial I put together below, also the making-of blog post with free downloads of the card designs! I thought about making all of the cards just different versions of the Doctor, but in the end, I decided to try to make the set look as authentic as possible, as if it had actually been released by the BBC, by using all of the main characters and the official promo shots to represent them. Now I’m just wondering how many comments I’ll get asking where to buy one! I had fun painting the scoring pegs to look like the sonic screwdriver. I designed the entire box as well.

Wizard's Monopoly (Harry Potter Monopoly) Free Board Games. Free board games are games based or played on a “board” meaning any kind of horizontal surface. 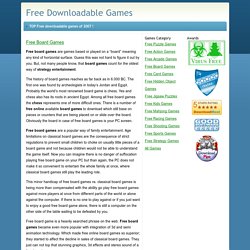 Guess this was not hard to figure it out by you. But, not many people know, that board games count for the oldest way of strategy entertainment. The history of board games reaches as far back as in 6.000 BC. The first one was found by archeologists in today’s Jordan and Egypt. Probably the world’s most renowned board game is chess. Blank Board Games to Print. Blank board games allow you to create a board game of your own or play a simple board game on the fly. 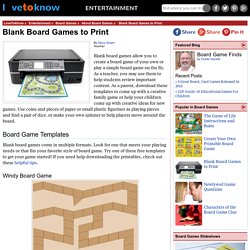 As a teacher, you may use them to help students review important content. As a parent, download these templates to come up with a creative family game or help your children come up with creative ideas for new games. Use coins and pieces of paper or small plastic figurines as playing pieces and find a pair of dice, or make your own spinner to help players move around the board. 16 Free Printable Board Game Templates. In order to open the templates below you will need Adobe Acrobat Reader, which is free to download. 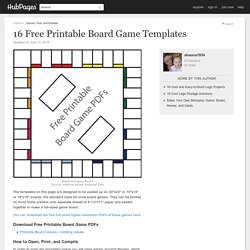 You should also be able to edit the files inside Adobe Photoshop and Adobe Illustrator (if you have them). Most home printers can't print a 20-inch sheet of paper. However, you can blow up the image and print it on multiple sheets of standard-sized paper. In the print setting window, under Page Handling, select "Tile All Pages.

"An image on the right-hand side of the window will show you how the image will be divided over numerous sheets of paper. True Blue Me and You: DIYs for Creative People. How to Make a Personalized Monopoly Game! I'm back from the holidays! 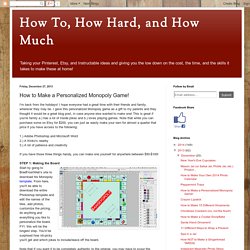 I hope everyone had a great time with their friends and family, wherever they may be. I gave this personalized Monopoly game as a gift to my parents and they thought it would be a great blog post, in case anyone else wanted to make one! This is great if you're family a.) has a lot of inside jokes and b.) loves playing games. Note that while you can purchase some on Etsy for $200, you can just as easily make your own for almost a quarter that price if you have access to the following: 1.) If you have those three things handy, you can make one yourself for anywhere between $50-$100!

Start by going to BradFrostWeb's site to download his Monopoly template. STEP 2: Making the Cards Once you have your board completed, next comes the community chest/chance cards. Note: you'll want to print on the front AND back of the cards. STEP 3: Making the Deeds 1. 2. 3. DIY Monopoly Board. I've never been a big monopoly fan. 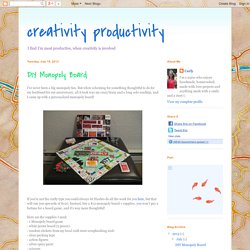 But when scheming for something thoughtful to do for my boyfriend for our anniversary, all it took was my crazy brain and a long solo roadtrip, and I came up with a personalized monopoly board! If you're not the crafty type you could always let Hasbro do all the work for you here, but that will run you upwards of $120. Instead, buy a $12 monopoly board + supplies, you won't pay a fortune for a board game, and it's way more thoughtful! DIY: How to Create a Monopoly Board Inspired by Your Town. One of the most well known games of all time is Monopoly. 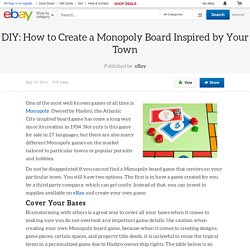 Owned by Hasbro, the Atlantic City-inspired board game has come a long way since its creation in 1934. Not only is this game for sale in 27 languages, but there are also many different Monopoly games on the market tailored to particular towns or popular pursuits and hobbies.