Marketers, Welcome To The World Of Emotional Analytics. Adweek. Google is testing a new advertising product seen as the last piece it needs to complete its ad tech superstructure. 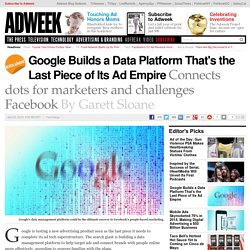 The search giant is building a data management platform to help target ads and connect brands with people online more effectively, according to sources familiar with the plans. The platform is called Doubleclick Audience Center, one source with knowledge of the new product said. (Doubleclick is the brand name of Google's suite of ad products for digital publishers and marketers.) "What they're trying to offer the community is a one-stop shop ad stack all in Google," said one digital marketing executive. Google has a demand-side platform for advertisers to buy digital ads; an ad exchange for publishers to sell ads; an attribution product to measure performance; and a dominant position in search and mobile.

Twitter Chokes Off Meerkat's Access To Its Social Network - BuzzFeed News. Neo Technology raises $20M, aims to cement its leadership as the graph databases era arives. By Michael Carney On January 15, 2015 With big data exploding across the business landscape, it’s of little surprise that database technology and new frameworks for structuring and accessing this data have received increased attention. 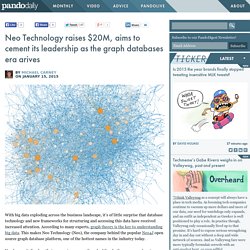 According to many experts, graph theory is the key to understanding big data. This makes Neo Technology (Neo), the company behind the popular Neo4J open source graph database platform, one of the hottest names in the industry today. Facebook open sources tools for bigger, faster deep learning models. Facebook on Friday open sourced a handful of software libraries that it claims will help users build bigger, faster deep learning models than existing tools allow. 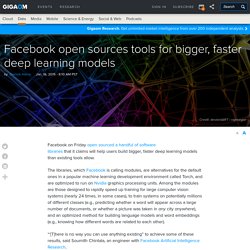 The libraries, which Facebook is calling modules, are alternatives for the default ones in a popular machine learning development environment called Torch, and are optimized to run on Nvidia graphics processing units. Among the modules are those designed to rapidly speed up training for large computer vision systems (nearly 24 times, in some cases), to train systems on potentially millions of different classes (e.g., predicting whether a word will appear across a large number of documents, or whether a picture was taken in any city anywhere), and an optimized method for building language models and word embeddings (e.g., knowing how different words are related to each other).

That team was formed in December 2013 when Facebook hired prominent New York University researcher Yann LeCun to run it. Shape the Future: Computer algorithms that can 'see' images on the Web. Thanks to smartphones, photos are the new language of the Web. 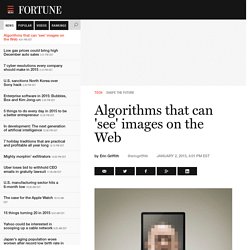 Each day people upload 1.8 billion new images to the Internet. The only problem with all that pic-sharing? The Web’s entire infrastructure is built around text. (Even Google’s image search function relies on text to identify images.) So how do we search, sort, browse, and navigate a rapidly growing sea of images? Data Is the New Diamond. An engagement ring traditionally is a sign of love and long-term fidelity. If you want the business equivalent – loyal customers who wouldn't dream of going elsewhere – then data is the new diamond. Many of our clients have found that providing consistent, accurate and information-rich customer experiences across online and mobile channels have helped to retain customers, bring in new ones, and drive top-line growth. 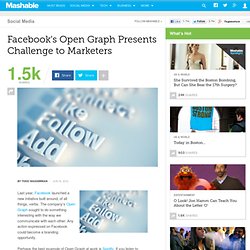 The company's Open Graph sought to do something interesting with the way we communicate with each other: Any action expressed on Facebook could become a branding opportunity. Perhaps the best example of Open Graph at work is Spotify. If you listen to Green Day's "Dookie" on Spotify, then all your Facebook friends will see that you're enjoying the album and perhaps they'll even mark their approval with a Like or comment. Meanwhile, you don't have to do anything to initiate the action except listen to the album (and don't initiate the app's "private listening mode"). Meanwhile, Spotify gets lots of free exposure simply by having users run its service. The Elephant in the Room. There’s big momentum behind Big Data lately. 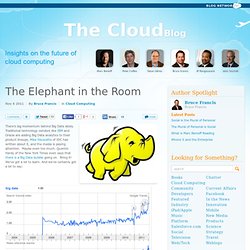 Q&A: Reid Hoffman, Partner at Greylock, Co-Founder & Executive Chairman of LinkedIn. Big Data: It’s Not How Big It Is, It’s How You Use It. ReportGrid -DAaaS. Back in October, ReportGrid closed a $750K seed round with investors like Launch Capital, David Cohen, Walt Winshall, Doug Derwin, and Ed Roman — not long after it graduated from TechStars’ summer program in Boulder. 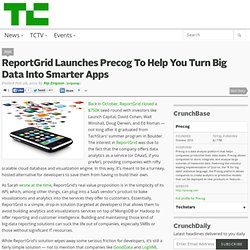 The interest in ReportGrid was due to the fact that the company offers data analytics as a service (or DAaaS, if you prefer), providing companies with nifty scalable cloud database and visualization engine. In this way, it’s meant to be a turnkey, hosted alternative for developers to save them from having to build their own. As Sarah wrote at the time, ReportGrid’s real value proposition is in the simplicity of its API, which, among other things, can plug into a SaaS vendor’s product to bake visualizations and analytics into the services they offer to customers. Big Data: Analytics Backbone for the Internet of Things (IoT) « Formtek Blog. By Dick Weisinger Refrigerators that can report their food-stock inventory, thermostats that self-regulate based on your habits and routines, basements that tweet you when they flood. 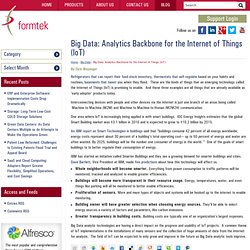 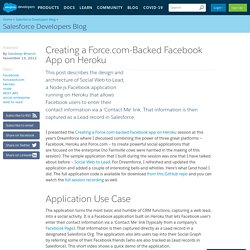 That information is then captured as a Lead record in Salesforce. I presented the Creating a Force.com backed Facebook app on Heroku session at this year’s Dreamforce where I discussed combining the power of three great platforms – Facebook, Heroku and Force.com – to create powerful social applications that are focused on the enterprise (no Farmville cows were harmed in the making of this session).

#HackTheGraph! World's Leading Graph Database » What is Neo4j? If you can sketch, you can use a graph database. Need a graph database like Twitter is built on? @neo4j delivers, @emileifrem tells why. Networked Life. I am so getting on this... Just completed this. Network science, influence and the social web. “At any moment in time, we are driven by and are an integral part of many interconnected, dynamically changing networks” – Katy Börner, Soma Sanyal and Alessandro Vespignani My original 3 R’s of Influence proposal was compared to the principles of network science due to the nature of data and relationships required in order to ascertain a full picture of our influence over others. 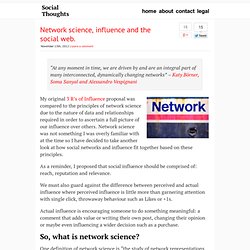 Social Enterprise Opportunity Webinar. Salesforce.com's Heroku Rolls out New Cloud Database Options. Salesforce.com's Heroku division this week rolled out two entry-level tiers for its Postgres-based cloud database service, hoping to cater to applications with lower data-volume requirements as well as helping startup developers make an easier jump into production. The new Crane level of the database service costs US$50 per month, with a 400MB RAM cache. Next up from there is the new Kappa tier, which costs $100 per month and has an 800MB cache. Both include the same array of features for supporting production deployments found in Heroku's higher-cost plans, such as continuous protection, where database activity is committed to write-ahead logs for quick recovery in the event of a hardware failure; improved security; and "production-grade" monitoring.

Announced amid Cloudforce 2012 in New York City on Friday, the enterprise cloud giant has signed on 20 social analytics vendors to bring their data analytics skills to the platform. Those companies include The Marketing Cloud ecosystem includes partners Bitext, Calais, Caterva, Clarabridge Link, EpiAnalytics, Kanjoya, Klout, Kred, LeadSift, Lexalytics, LinguaSys, Lymbix, Metavana, OpenAmplify, PeekAnalytics, Rapleaf, Solariat, Soshio, The SelfService Company and Trendspottr. Advertised as the "world's only integrated social marketing platform," Marketing Cloud is the composition of some of Salesforce's acquisitions, such as Radian6 and Buddy Media.

Essentially, it promises to turn insights into actions and connections into customers for life because of the way that brands can engage them using this platform. Salesforce goes for social big data. Enterprise Applications. Radian6 Helps Extract Value from Big Data. Signs Of The Semantic Web Surface... The Semantic Web’s promise is about developing common frameworks that allows data to be shared and reused across applications and platforms. At its heart comes the understanding that applications are loosely coupled.

The apps connect with APIs that form a sort of glue. Use Radian6 for Demographic Insight.